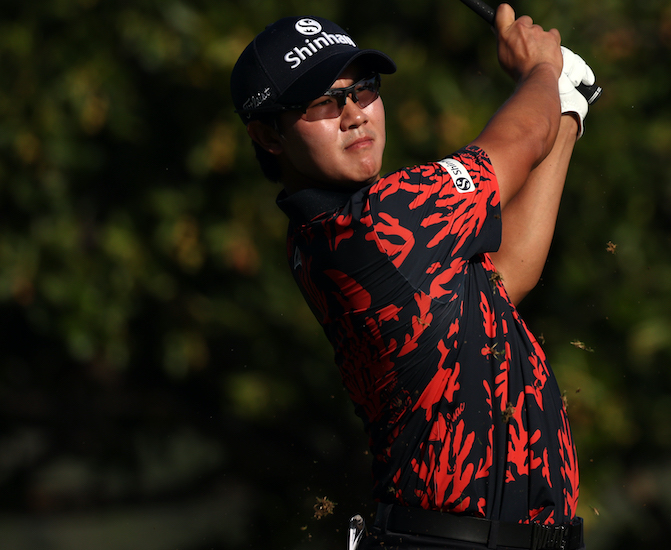 Rookie S.H. Kim has put himself in position to become the next Korean winner on the PGA TOUR after a battling 3-under 67 on Friday kept him in contention at the Sony Open in Hawaii.

The 24-year-old Kim, who is making his debut on the PGA TOUR following a successful campaign on the Korn Ferry Tour in 2022, hit five birdies against two bogeys at Waialae Country Club in Honolulu to be amongst the leaders.

Kim credited countryman and veteran star K.J. Choi, for his solid week so far after playing a practice round together earlier in the week. Choi is a former Sony Open champion and an eight-time TOUR winner.

“K.J. always inspires me and gives advice and keeps me motivated. We played nine holes together this week and he gave me tips and explained how to manage this golf course. So it has helped me a lot,” said Kim, who was voted the 2022 Korn Ferry Tour Rookie of the Year.

Starting his second round at the back nine, Kim made birdies on Hole Nos. 10, 17, 18, 3 and 9 and stayed in the title chase with some wonderful par saves. He is 5-for-5 for sand saves through two rounds, a stat which Choi, who is renowned for his bunker play, would be proud of.

“I didn’t feel too well when I got up in the morning. But I finished well, so I’m happy. I couldn’t play my own game and some of my shots were not good. However, I managed my game and did not take risks. I made some important pars when I found bunkers, so it helped keep my scores. That has been a key the past two days,” he said.

With compatriots Tom Kim, who won twice last year, Sungjae Im, K.H. Lee and Si Woo Kim establishing themselves against the world’s best players, Kim is eager to get into the winner’s enclosure too.

He is currently ranked 47th on the FedExCup points list, thanks to a fourth-place finish at the Shriners Children’s Open and T13 at the Sanderson Farms Championship last fall and feels he is slowly adjusting to life on the PGA TOUR.

“I got used to the PGA TOUR while playing the fall events. I then had a month break which helped me refresh and recharge. So I feel like starting anew again this week. I need to get back on track quickly, try to focus and not have too much stress. There are many events that I can play before the summer and I will just do my best, and try to play my own game. Then my efforts will be paid off hopefully,” he said.