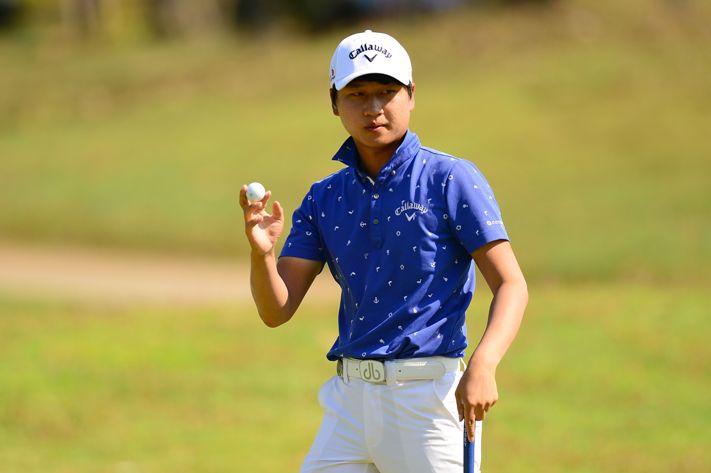 Korea’s rising star Jeunghun Wang is prepared to fight for the coveted Asian Tour’s Order of Merit crown despite spending the last two weeks in a Seoul hospital.

A stomach bug put Wang out of action and he lost six kilograms in weight. His health scare has jeopardized his appearance at the Asia Pacific Diamond Cup in Japan and Mercuries Taiwan Masters later this month.

The 21-year-old Wang, who is currently third on the Merit list, is adamant of fighting his way back to full fitness to prepare for an end-of-season fight for Asia’s number one title.

“I just started hitting golf balls again on Wednesday and that too, I could only hit about 100 balls as I’m very low on energy. I was in hospital for almost two weeks with a stomach problem and I was running a fever too. I couldn’t eat and I was quite worried when I was in hospital,” said Wang.

“The doctors have told me it could be a while before I regain my full strength but I’m hoping to get strong quickly by eating well and getting back into the gym. I’m starting to eat better now and my mother is also cooking typical Korean food for me like kimchi which will be good for my body.

“Right now, I’m not sure if I can play in Japan next week as it will depend on how I feel. I couldn’t hit my driver on Wednesday as I didn’t have any power but hopefully it will come back in the coming days,” added Wang.

Since being selected as a captain’s pick to represent Team Asia in the EurAsia Cup earlier this season, Wang has continued to blossom in his career, first winning in Morocco on the European Tour and then going on to win the AfrAsia Bank Mauritius Open in the following week, an event tri-sanctioned by the Asian, European and Sunshine Tours.

Wang, who also featured in the Olympic Games in Rio in August, plans to play in several of the cash-rich tournaments on the Asian Tour towards the end of the season including the Venetian Macao Open, CIMB Classic and UBS Hong Kong Open in his attempt to chase down Order of Merit leader Scott Hend of Australia. The Korean currently trails Hend by US$229,726.

“Scott has been playing so well recently and he could be very hard to catch. However, if I can play well in the big events, it could all change,” said Wang.

“I’m still thinking about the Order of Merit title. There still some golf to play for the rest of the season and as long as I have a chance, I will give it a fight.”

The slender Wang will also focus on the European Tour’s Race to Dubai Final Series in his hopes to conclude a truly successful season.

“My year has been good with those wins earlier in the season and I also played in the Olympic Games where I enjoyed the experience and learned a lot from my non-playing captain K.J. Choi,” he said.