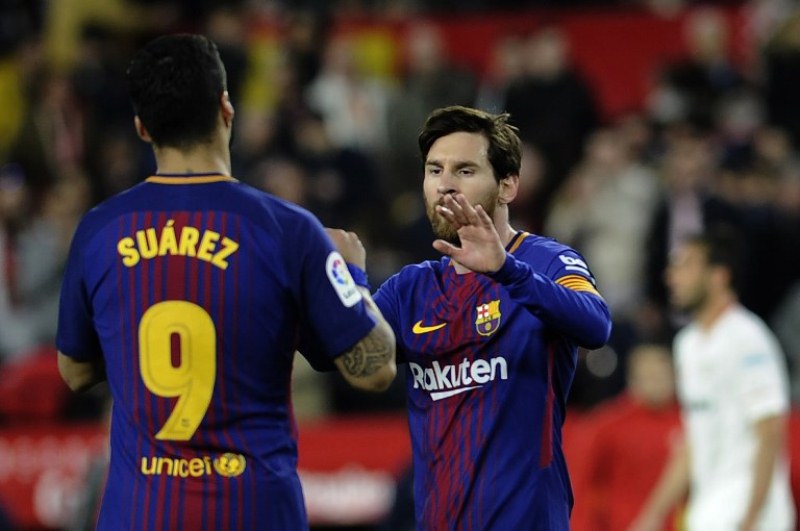 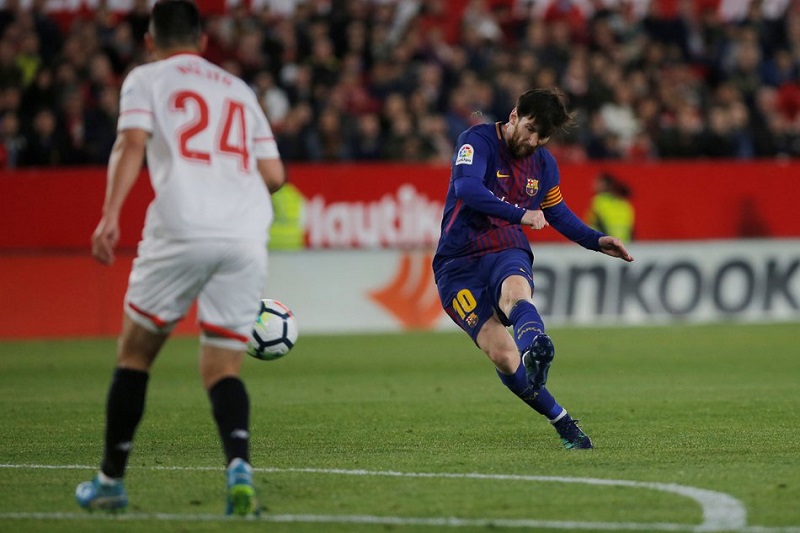 Lionel Messi rescued Barcelona’s unbeaten season on Saturday as the La Liga leaders scored twice in the last three minutes to snatch a 2-2 draw at Sevilla.

Messi came off the bench with his team two goals down at the Ramon Sanchez Pizjuan as Luis Suarez pulled one back in the 88th minute, before the Argentinian struck the equaliser a minute later.

Barcelona had not lost a league game this term, or in 13 months, but finishes from Franco Vazquez and Luis Muriel looked to have sealed Sevilla a stunning victory.

But Messi came up trumps again and he celebrated his goal, a bending long-range strike into the bottom corner, by rushing to the jubilant coaching staff and substitutes on the touchline.

“If you have Messi and he does not play, it is clear that it has a lot of importance,” coach Ernesto Valverde said.

“He is a player that is decisive every time he touches the ball.”

Barcelona have now gone 37 consecutive league games since losing to Malaga in April last year and stand one match away from equalling Real Sociedad’s record set in 1980.

Messi had been left out of the starting line-up due to a hamstring complaint, with Valverde perhaps keeping one eye on Wednesday’s Champions League quarter-final against Roma. Valverde expects him to be available at the Camp Nou.

“Today as a precaution he has not started, but we think that on Wednesday he may be available,” Valverde said.

“We will see how he reacts after today’s effort. But we think it will be fine.”

Messi still made the decisive intervention even if Barca’s draw means Atletico Madrid can cut the gap at the top to nine points by beating Deportivo La Coruna at home on Sunday.

“We do not see the league won,” Valverde said. “Hence the celebration of ours. We know the spirit of the team and the importance of getting a draw here at this moment.”

Sevilla, meanwhile, are still 13 points adrift of the top four, havng played a game more than Valencia, and must recover in time for their own Champions League clash against Bayern Munich on Tuesday.

They would have been deserving winners here and, in truth, could have been out of sight had Muriel and Vazquez finished any number of dangerous breaks in the second half.

“We are all a little angry in the dressing room but football is like that,” Sevilla coach Vincenzo Montella said. “When you have chances to score you have to score and we had many chances to close the game in the second half.”

Earlier, Gareth Bale made a strong case for a starting spot against Juventus by scoring twice in Real Madrid’s 3-0 victory over Las Palmas as Cristiano Ronaldo was rested.

Bale’s double in Gran Canaria served as a timely reminder to coach Zinedine Zidane, with the trip to Turin for the first leg of the Champions League quarter-finals to come on Tuesday.

The only worry for Zidane was the sight of Nacho hobbling off in the first half, with what appeared to be a hamstring problem.

“Everything is positive except one thing, the injury of Nacho,” Zidane said. “He is not happy. It is a concern but hopefully only little and the rest is all good.”

Bale opened the scoring with a trademark run and finish down the left before Benzema converted one penalty and then generously handed over a second, which the Welshman had earned himself.

The question now is whether Zidane was suitably impressed to pick Bale in Italy.

“We will see on Tuesday, I am happy for his performance,” Zidane said.

Girona’s hopes of Europa League qualification took a knock after they were held to a 1-1 draw by struggling Levante. Athletic Bilbao also drew 1-1 at home to Celta Vigo. – Agence France-Presse