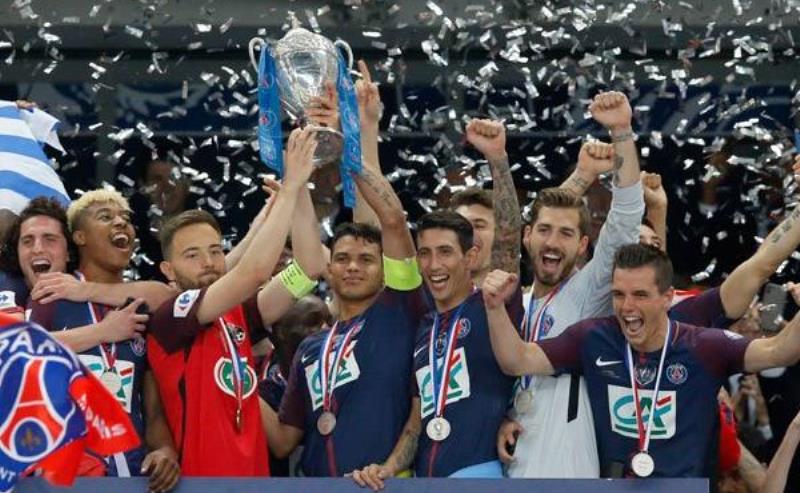 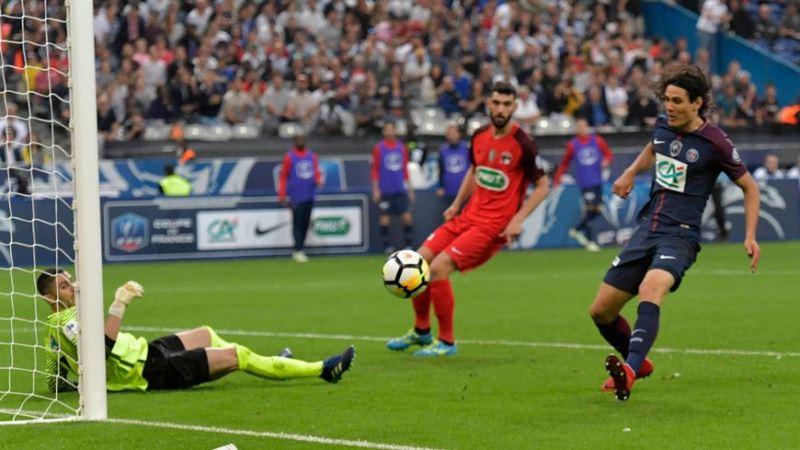 Tiny Les Herbiers fell short of claiming one of the biggest upsets in football history but gave the mighty Paris Saint-Germain a game before losing 2-0 in Tuesday’s French Cup final.

Giovani Lo Celso scored PSG’s opener in the first half at the Stade de France, breaking the resistance of Les Herbiers after they had been saved three times by the woodwork early on.

PSG were then denied a second by a controversial call from the Video Assistant Referee, and they needed an Edinson Cavani penalty in the 74th minute to secure victory.

It was a brave Les Herbiers performance, although it was never in any real doubt that PSG would win the trophy for the fourth year running and complete a clean sweep of France’s domestic honours.

Their season will still arguably be best remembered for their Champions League exit to Real Madrid in the last 16, and for the never-ending soap opera that is Neymar.

The world’s most expensive player was in attendance at the final, watching on as he continues his recovery from foot surgery two months ago. He later joined in the post-match celebrations.

“I am happy with our season,” coach Unai Emery, who is out of contract and will not stay on for a third campaign, told Eurosport.

“We can also talk about the little negative things like the Champions League, but this year the team has played well, always trying to score goals.”

This was perhaps the greatest mismatch in any Cup final in modern times, with the Qatar-owned PSG — their revenue last year around 500 million euros ($596m) — coming up against a side from the lower reaches of France’s third division.

Les Herbiers brought in the region of 15,000 fans — around the same as the population of the small town in western France — to enjoy themselves on a national holiday, and were greeted by scorching temperatures in Paris.

They were not let down by their team, and Les Herbiers captain Sebastien Flochon was invited to join PSG skipper Thiago Silva in lifting the trophy at the end.

“I am very proud of my team. We hung on in there and avoided a hammering, and we might even have scored a goal at the end,” Les Herbiers coach Stephane Masala told France 2.

“Paris are so strong, so fast, and they make all the right decisions.

“We wanted to stay in the game for as long as possible. It was a great final and we are proud that it was a good match.”

Many PSG supporters spent their energy prior to kick-off whistling French President Emmanuel Macron — a supporter of their sworn enemies Marseille — as he greeted the teams on the pitch.

Even without Neymar, their starting line-up still cost close to 400 million euros. In contrast, Les Herbiers are a club with a budget of two million euros and who could yet be relegated to the fourth division.

Paris recently beat Monaco 7-1, so there were fears that Les Herbiers could find themselves on the end of a record scoreline.

They kept the score down, although PSG hit the woodwork three times in the opening 20 minutes, twice from Lo Celso and once from Kylian Mbappe.

Lo Celso then got the breakthrough in the 26th minute with a fine left-foot strike from 25 yards, and Les Herbiers were lucky not to go further behind five minutes into the second half.

Mbappe followed in to score after Diaranke Fofana had deflected the ball onto his own bar, and wheeled away in celebration.

However, the goal was eventually ruled out following intervention from the VAR, with Marquinhos penalised for a handball when in fact he might have been fouled in the area.

The second goal eventually arrived in the 74th minute, Cavani dispatching a penalty for his 40th of the season after he had been brought down by goalkeeper Matthieu Pichot.

PSG took the trophy, but Les Herbiers took the plaudits, celebrating their remarkable achievement in reaching the final with their fans at the end. – Agence France-Presse