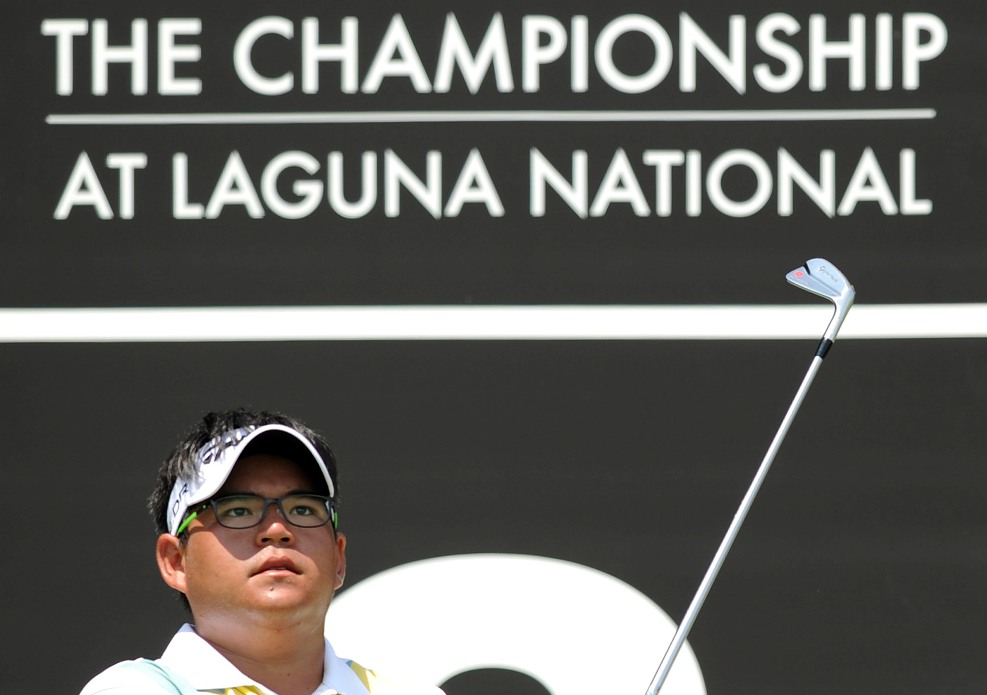 Thailand’s Panuphol Pittayarat survived a late bogey scare but continued to take  the third round lead with Denmark’s Anders Hansen after posting a three-under-par  69 at The Championship at Laguna National on Saturday.

Hansen denied Panuphol the outright lead by signing for a 67 to share pole position with the 21-year-old Thai after compiling a three-day total of 16-under-par 200 at the US$1.5 million event sanctioned by the Asian Tour and European Tour.

Korean-American David Lipsky remained in contention for his second win on the Asian Tour after carding a 70 to share third place with Robert-Jan Derksen of the Netherlands on 202 at the Laguna National Golf and Country Club.

Panuphol, nicknamed ‘Coconut’ enjoyed yet another fruitful day as he continued his charge towards his maiden win on the region’s premier Tour.

“I’ve been in contention a couple of times where I got to play with some great players. I will try not to think about how they are doing and just do my best. It’s going to be a good Sunday,” said Panuphol.

Playing in the weekend rounds for the first time on the Asian Tour this season, Panuphol could only find one birdie on four in his outward-nine.

But the Thai began to show his title credentials by firing birdies on holes 13, 15 and 16. A bogey-four on 17 however blemished his otherwise flawless card.

“I was just pushing every putt I made in the front-nine. But on the back nine, I kind of gained back my confidence when I managed to roll in the putts, except for that bogey on 17 where I hit a bad shot.

I came into this week missing three straight cuts on the Asian Tour this season. My performance so far this week has definitely given me a huge confidence boost,” said Panuphol.

Meanwhile a late flurry of birdies in his closing four holes saw Hansen making his move to share the lead with Panuphol.

The Dane, who started the day two back of Panuphol in tied-fifth, got off to an encouraging start with an opening birdie on the par-four first.

Another birdie on eight saw him turn in 34 but it was his hat-trick of birdies starting from 15 that eventually surged him to the top.

“I’m very pleased. I didn’t hit the ball that great today but I made a couple of good putts on the last few holes.  It was nice to finish with those three birdies. It was a little more windy today so it was more tricky. But it was a great finish,” said Hansen.

“Every time you are up there you have to be pleased so I’m looking forward to tomorrow. I love competition and I love playing under the gun as it gets your attention,” added the Dane.

A round of 70 put the spring back in Lipsky’s step as he moves into contention for his second win on the Asian Tour.

Lipsky burst into the scene during his rookie year in 2012 where he not only topped the Asian Tour Qualifying School but also went on to notch his first victory in Cambodia.

The 25-year-old will go out with all guns blazing in search of those all-important red numbers in his final 18 holes.

“I am looking forward to the final round tomorrow. With the current greens condition and how I’ve shot on this course, I will have to try and make as many birdies as possible tomorrow,” added Lipsky.

Leading Scores after round 3 of the The Championship being played at the par 72, 7071 Yards Laguna National Golf Club (am – denotes amateur):