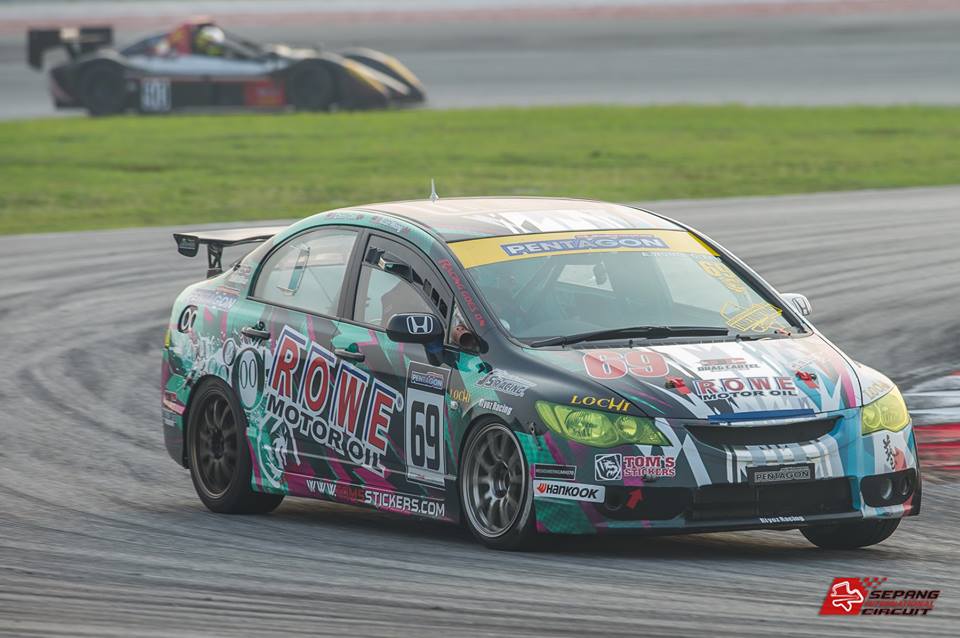 Pentagon Racing – the current leaders of the Malaysia Championship Series (MCS), has engaged the services of the country’s top driver Faidzil Alang in their bid to strengthen their hold on the national championship.

Featuring the partnership of Chris Tan and Alan Wong, the Kuala Lumpur-based racing team intends to leave no avenue unexplored in their bid to be crowned the inaugural champions in the MCS Touring Production Class.

“We were out of pace in the last race as we were struggling with setting up the car with the additional weight penalty. With the help of Faidzil Alang and his Fawster Racing Team, we hope to fine tune the suspension set-up and try to beat our personal best lap time in this round’s qualifying session.

“We actually suffered a mechanical issue on the last lap on the last turn of the endurance race at the last round. We were lucky to finish on the podium. As this weekend will see two sprint races on Sunday, we need a reliable machine and safe race out of trouble,” said Chris.

Winner of both sprint races in Round 1, they finished third in the endurance-style Round 2; but were promoted to second after the partnership of Taiwan’s Tung Wei Hsiao and Desmond Khoo of N1 Racing was disqualified and stripped of their second place win.

The results further cemented their position at the top of the Touring Production Championship standing with 42 points. With other favourite drivers and teams also downed by hard luck, Tung and Desmond remained second with 20 points. Singapore’s celebrity lady driver Claire Jedrek, who was also forced to retire early, remains third overall with 18 points.

Commenting on his expectations for Round 3, Alan said that he and the team would need to be at their very best this weekend to score a good result for the team.

“We aim to try our very best in Round 3. With the help of Faidzil Alang and Fawster Racing, we are looking forward to a strong performance this round and to maintain our good momentum in the championship,” Alan said.

Faidzil, who competes in the second tier Malaysia Touring Car (MTC) class, said that he was happy to assist Pentagon Racing.

“Basically, we are all friends in the paddock. I am very happy to provide them some racing tips and get the crew of Fawster to work on the set-up. I must congratulate the Pentagon Racing team on their professional approach. This team has definitely grown big from where they first started,” said Faidzil, a full time racing instructor and winner of multiple championship crowns including the Malaysia Merdeka Endurance Race and the prestigious Proton Satria GTi.

Currently third in the MTC class with 24 points, Faidzil trails two entries from Proton R3 Motorsports. The partnership of Fariqe Hairuman and James Veerapan leads the championship with 42 points with two-time champion Syafiq Ali in second with 37 points.

Apart from action in the MCS, fans will also be treated to action from the Asia Cup Formula Series, the Caterham Championship and the Asia Classic Car Challenge.

Free practice and qualifying will be held on Saturday with all races run on Sunday. Fans can catch all the action for free from the Main Grandstand area. Meanwhile, the fans can also enjoy more action at the paddock with the Paddock Pass at only RM85 and the Paddock Season Card for RM200, both inclusive of GST.