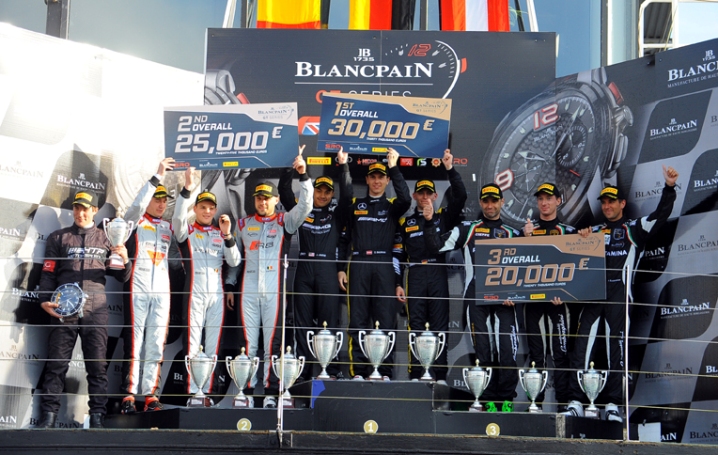 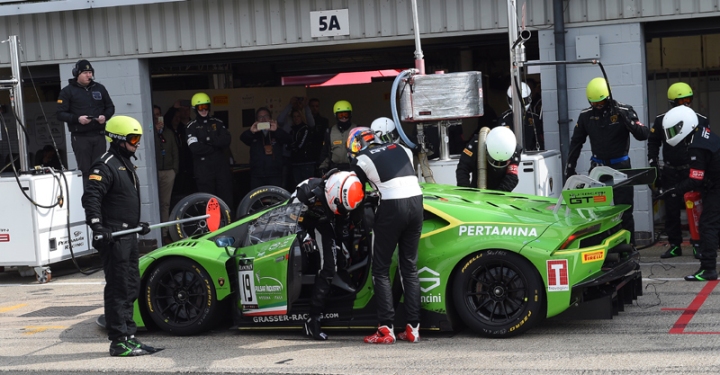 What a great weekend for GRT Grasser Racing Team, reaching the first podium in this year´s Blancpain GT Series at Silverstone.

Bortolotti laid the ground for this great result by putting the Lamborghini Huracán on pole position in qualifying with an absolute “dream lap”: “I think this was the lap of my life”, the Italian was beaming after setting a new lap record for GT cars, 2,4 seconds faster than the old one.  “Everything went perfectly right.”

Team principal Gottfried Grasser was ever so happy as well: “I am really proud of having one of the best GT drivers at all in my team with Mirko, for sure the best of the Lamborghini drivers. That was a great performance, especially knowing that he just had this one lap, as we had planned to safe as many new sets of tyres for the race for strategic reasons.”

The strategy pod off: Bortolotti won the start and managed to defend the lead until the end of his stint. He handed the car over to Rolf Ineichen, who still came back to the track in first position, but suddenly had to face additional opposition: Not only the HTP Mercedes which had been very close from the beginning now put pressure on him, but also the WRT Audi had closed up from quite far behind.

“They made clever use of the rulebook by putting a little bis less fuel in and so doing their pitstop in less than 70 seconds.” To clarify: There is a special paragraph in the Blancpain rulebook, saying that any pitstop has to be either shorter than 70 or longer than 90 seconds – the delta in between is not allowed. When this rule was written, it was supposed that a regular “full service” pitstop including refuelling and driver change etc. could not be done in less than 70 seconds – only “emergency stops” because of a puncture, for example. The minimum 90 second limit for regular stops was created to avoid an expensive technology race like developing more and more sophisticated refuelling systems. “But now Audi managed to outwit the system”, says Ineichen.

MThe Swiss then not only had to fight the two pressing opponents, but also to manage heavy traffic. In third place he came back to the pits to hand the car over to Jeroen Bleekemolen, who then defended this position till the end of the race.

“But there was no way to catch the Mercedes and the Audi in front. Towards the end of the race, with old tyres, they were faster than us with Mirko in the beginning, with new tyres. Quite astonishing,”remarked Ineichen. Nevertheless celebrations ran high in the GRT Grasser Racing garage after the first podium of the year. “That was more than well deserved”, Gottfried Grasser was adamant, “we all gave our best and it paid off.”

The drivers also thanked their boss: “Gottfried is great in working out the right set up and the perfect strategy. This contributed a lot to our success again”, said Ineichen. Bortolotti also mentioned the performance of his teammates: “The whole team and especially my co-drivers Rolf and Jeroen did a great job. A tremendous result and a fantastic weekend.”

Car number 19 was not so lucky. In qualifying problems to make full use of the peak of the tyres arose, resulting in only 31st place on the grid, even if the difference to a Top 15 positions was a mere few tenth in the closely packed GT field.

At the start it looked like Michele Beretta was immediately able to gain a few positions, but then the Italian faced bad look: “In the whole usual mess of the first lap, a Nissan spun me around, so we dropped back to last.” When he handed the car over to Luca Stolz after one hour, he had already climbed up into the Top 30, and the young German managed to gain a few more places until Andrea Piccini took over for the last stint.

A Top 20 result still seemed to be possible, until a safety car period to move the stranded Ferrari number 42 out of a gravel bed hit at the worst possible moment for Piccini: “We had just been lapped by the leader of the race, so due to the safety car we lost contact to our direct competitors ahead of us.  So we were stuck in the middle of the leading group – but one lap down.

At least I could keep up with them for 20 minutes after the safety car restart, apart from the leading Mercedes and Audi that were on another planet! That showed our pace was definitely good. Anyway I think for the race we made a good step forward with the set-up, which will be helpful for the future races…”