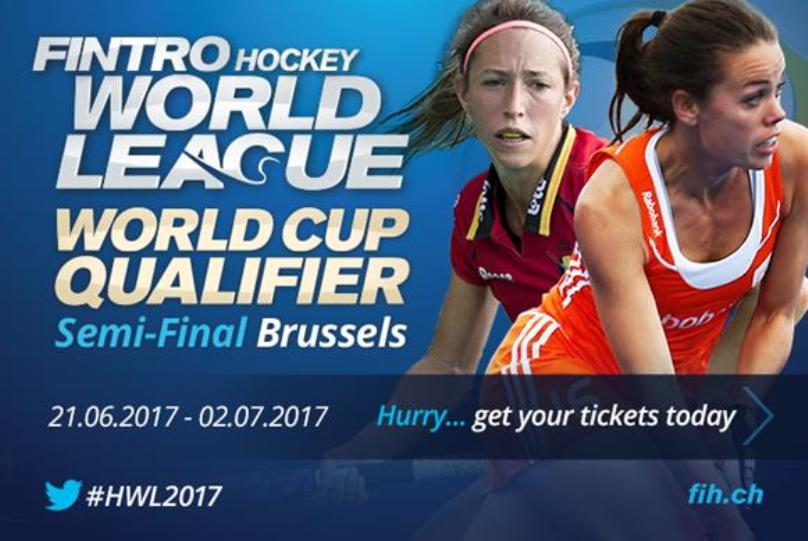 Thursday 29 June is quarter-finals day at the FINTRO Hockey World League Semi-Finals. Before the quarter final action begins, Scotland and Malaysia will play to decide 9th and 10th place.
Quarter-finals – a preview
New Zealand v Italy
In the first quarter-final of the competition, the Black Sticks take on Italy (WR: 16), a side that has performed consistently well at this event against higher-ranked opposition, including a draw with both China and Korea in the pool stages.
New Zealand (WR:5) are a team that has yet to hit top form. They won their opening two matches but were unconvincing in the 1-0 win against lower-ranked Spain and outplayed in their loss to Belgium. However, New Zealand put in a strong performance against Australia and will be looking to play with the strength, physicality and speed that, on their top days, they are renown for.
Italy welcomes back Jasbeer Singh after her one match suspension, and they will be looking for the experience of captain Chiara Tiddy, Dalila Mirabella and Elisabetta Pacella to help weather any New Zealand attack and create opportunities of their own.
For their part, New Zealand is not short of experience or talent, coach Mark Hager will be looking for his captain Stacey Michelsen and experienced players such as Sam Charlton and Pippa Hayward to galvanise the team to perform at their scintillating best.
Australia v China
Barring their 2-0 defeat at the hands of arch rivals New Zealand, Australia have played this event well so far. They achieved their first target of winning the pool and will now be determined to make the semi-finals and automatic qualification to the World Cup in 2018.
The Hockeyroos are still a squad in the making with several younger and more inexperienced players on the team but this is tempered by the presence of some characters who are real match winners.
Kathryn Slattery proved she had out her scoring boots on in the 4-1 match against Spain and Emily Smith will always be looking for a chance to run at the opposition. Maddy Fitzpatrick and Georgina Morgan are two players who are starting to shine in this squad.
China can always be relied on to grow in a tournament. They are a side that defends well and can prove frustrating to an opposition, particularly a team like Australia that likes to use space and play an attacking game. In Ye Jiao they have a very good young goalkeeper, while the experience and tenacity of players such as Cui Qiuxia, De Jiaojiao and Llang Meiyu will ensure the team is always pushing for results when it most matters. China’s tactics are usually spot on, particularly in the later stages of an event.
Netherlands v Spain
As group winners and with no goals conceded, the Netherlands are looking a class act at this event. They stuttered against China, only scoring towards the end of the game but, rather than seeing this as a problem, the team viewed it as a chance to practice a patient approach.
Players of experience, such as Margot van Geffen, Kitty van Male, Marloes Keetels and Carlien Dirkse van den Heuval provide the backbone of this team but the emergence of players such as Maria Verschoor, Laurien Leurink, Charlotte Vega and Frederique Matla could well signal the start of a new Dutch era of dominance.
Spain, by contrast, have battled their way to the quarter-finals but will consider themselves unlucky not to have finished higher up the pools. They have pushed higher-ranked rivals hard and have shown themselves to be a squad of talented and physical players.
They also show lots of strategic nous, particularly in the last pool match against Belgium. Coming up against the world number one will be a challenge but Spain will go into the match and throw everything they have at the Netherlands.
Korea v Belgium
The fourth quarter-final is an intriguing match between a team that is consistently among the top 10 in the world and a side that is in the middle stages of development. Korea (WR: 9) go into the match with the confidence of a win over Asia rivals China but they also endured a 9-0 loss to Netherlands.
Against China, Korea set up a stubborn defence and then scored two counter-attacks; against Belgium (WR: 14) they will meet a side that will be far more attacking than China, which could see a change of tactics from Korea. Certainly, in Cheon Eunbi, Cheon Seul Ki and Baek Eeseul they have players who can create and score goals and, as they proved against China, they have defence that can withstand a lot of pressure.
Belgium will have been frustrated with their loss to Spain as they let their very high standard of the earlier performances slip a little. Captain Anouk Raes and team stalwarts Jill Boon and Louise Cavenaile will be looking to steady the ship and not let the sense of occasion get to the younger players.
This is a very talented bunch of athletes who have the potential to be semi-finalists if they perform to their ability.

There are rich rewards for the top placed teams. The four highest finishers will go on to compete in the showcase end of year event, the Hockey World League Final in Auckland, New Zealand between 17-26 November.

There is a caveat to this: if New Zealand fail to finish in the top four, they will still be competing in the Final, so only the top three placed teams from this event will qualify. They will be joinde by the top four from the Hockey World League Semi-Final in Johannesburg.
And five automatic berths are available for the 2018 Hockey Women’s World Cup in London, England, although this will increase depending on the outcome of the Continental Championships as these are also World Cup qualifying events.
Match Schedule Thursday 29 June (all times CET)
11:00 SCO v MAS
13:15 NZL v ITA
15:30 AUS v CHN
17:45 NED v ESP
20:00 KOR v BEL