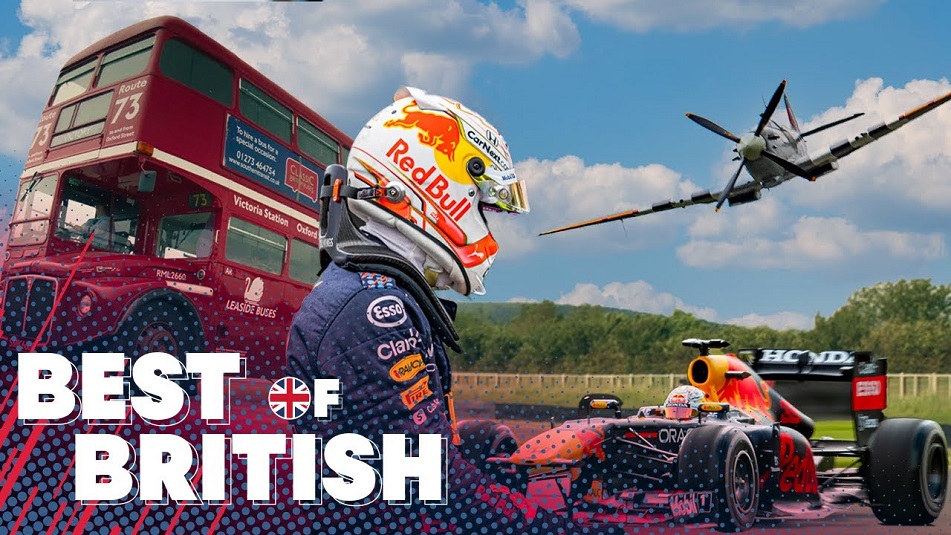 Never ones to shy away from an on-track battle with the Best of British, what better way to prepare for the British Grand Prix than with a shootout against some of Britain’s most iconic modes of transport….

For this Best of British battle, there was no holding back when it came to bringing out some iconic members of British transport history – and you can’t get much more iconic than the Supermarine Spitfire. One of the greatest fighter planes ever built and a jewel of aerodynamic and engineering vision and skill, the Spitfire was always going to be top of the list.

With the Spitfire confirmed, the only thing remaining was to think of some other transport icons, vehicles that embody British culture and the thrill of the open road. How about…. a Double-decker night bus, London black cab, a car packed full of summer festival-goers, and that notorious symbol on the British roads, the white van.

In true Red Bull spirit we fired up the double F1 championship-winning RB7 to take on the big beasts of British transport in a fight to the finish line ahead of this weekend’s race.

Located just up the road from Red Bull Racing Honda’s Technology Campus in Milton Keynes, the British Grand Prix is a hugely significant race for the Team and for its drivers as Max explains.

“The British love their motorsport, which is special to see, so I’m always very happy to be in the country, but of course to be at Silverstone is even better. It was great to see all of these typically British vehicles on track with the RB7 and I hope the fans enjoy this bit of fun before the race at the weekend.”

Red Bull Racing Honda CEO and Team Principal, Christian Horner added: “I think Silverstone is going to be a big challenge. It’s been a stronghold of Mercedes for several years now, but it’s another opportunity to see how we perform on a different track. And of course, with the first of the new Sprint Races this year it’s going to be a new event format and extra points are available. Whatever happens it’s going to be a really exciting weekend and we are ready for the fight.”