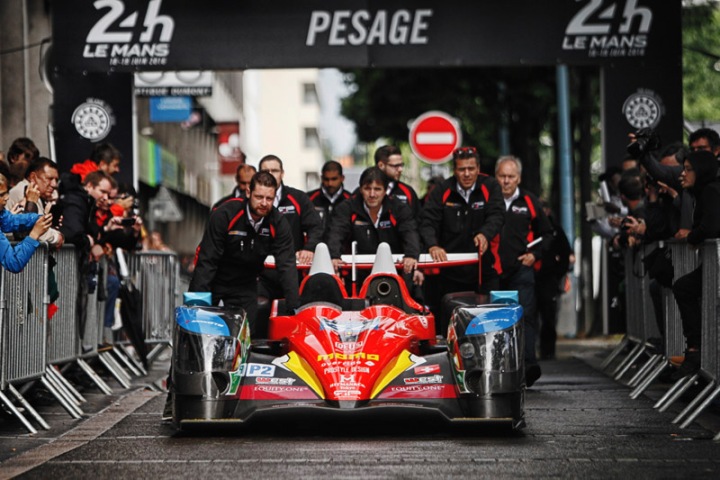 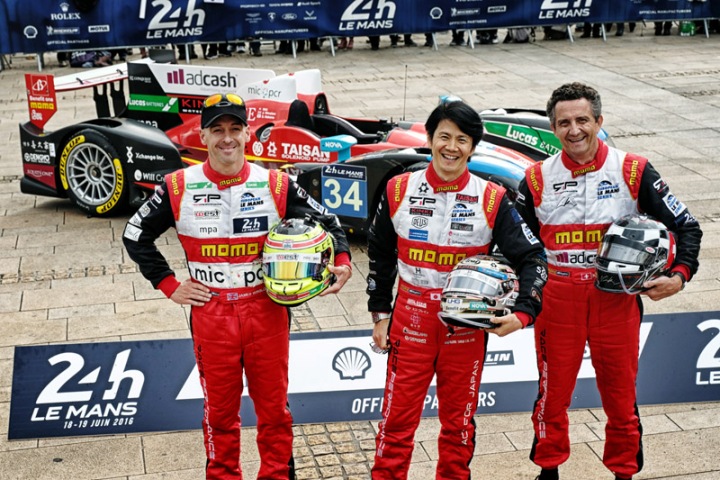 The record is there: For the sixth time out of six starts at the 24 hours at Le Mans the Swiss Race Performance team managed to see the chequered flag, a reliability record never reached by any team in any class before. Not being able to finally end up at the front end of the classification was mainly due to an incident already at the beginning of the race.

Shinji Nakano, who was on a good way up the field with the LMP2 Oreca-Judd on the drying track after the long safety-car period at the start, got heavily hit by a competitor from behind.  This did not only cause an “off” into the gravel bed, but also serious damage to the back of the car, including the gearbox. Repair work in the garage where the whole back of the car had to be changed meant an early loss of more than an hour.

Later the start behind the safety-car due to heavy rain should bring additional trouble: Due to the low speed during the safety-car laps, humidity was able to enter the car, causing problems with the electronics and a few additional pitstops.

Even with a good result now out of reach there was always complete agreement within Race Performance about “us wanting to continue and finishing the race in a case, independent of our position.” A goal that was reached in the end – Niki Leutwiler brought the car home safely after the 24 hours, finishing P43 in the general classification and P17 in the LMP2 class.

In the garage the whole team was celebrating the new record after the common effort: “After 24 hours of really hard work we finally did it”, James Winslow was really happy. “Le Mans is just the most prestigious und challenging race at all. The team really showed great strength of character here. Big thanks to everybody helping to reach this goal.”

Also ex-F1-driver Shinji Nakano was not unhappy after his ninth start at Le Mans: “It has not been an easy weekend for us, we had our fair share of problems on the car during the race, but somehow we managed to finally sort out everything again. Towards the end of the race the car was even quite good for me again. My teammate James also die a good job.

Niki had a few problems during his night stint, but in the other three he also performed very well.” Of course a racing driver is always aiming for a podium, especially at Le Mans, he said, “but on the other hand here it is even special to see the chequered flag, and that´s what we did. And who knows, the podium might happen as well sometime in the future…”

Niki Leutwiler got a bit ironic when he said “that for us it would have been best if the race had onl started Sunday midday. From then on, we were really on it and everything worked fine. Why things did not go according to plan before we still have to analyse. Our strategy of progressing by consistency and just doing our laps without any problems did not work out this time.”

One key point for the Swiss who mainly during the night had to cope with a few off-track excursions was, “that I had a few problems with the accelerator. It looks like there were some changes made at a time where not all drivers where still able adapt to it. We have to look into the reasons for this. Normally it should not happen in such an experienced team like ours…”

Team principal Michel Frey had mixed feelings:  „The rain and the start behind the safety-car made it very difficult for us”, he stated, “and the crash quite at the beginning together with a few other smaller problems of course die not help either. Actually we were only able to do regular and consistent stints quite late in the race.

On the other hand we still set fairly competitive lap times with our old car and at least reached our minimum aim of finishing the race. Now we have to consider how we will progress from here, which kind of investments will be possible for the future to have a fully competitive car again and be able to fight for real top positions.”

Race Performance MOMO Megatron this year also participated for the first time at a support race at Le Mans: Even as the LMP3 car had to be partly rebuilt in France by the Race Performance mechanics after a test crash of Giorgio Maggi at Red Bull Ring short before the start of the Le Mans week, taking part in the „Road to Le Mans“ race in a field of nearly  40 GT3  and LMP3 cars  was  worth the effort.

„We made good progress there, especially as far as the set-up of the car is concerned, which is really promising for the future”, Frey was adamant. After a good start, Marcello Marateotto ended up in the gravel bed shortly, “which of course threw us back a little bit, otherwise a real top result would have been possible.” In the second half of the race, 18-year-old Giorgio Maggi delivered some really convincing lap times which made it possible to at least finish in P13 overall and P10 in the LMP3 class.