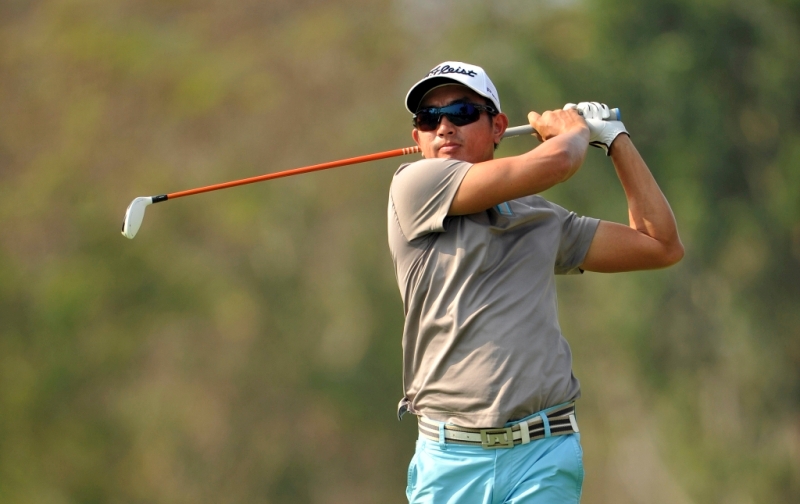 Thailand’s Sattaya Supupramai adhered to the advice of his uncle to keep a cool head as he surged into a three-shot lead after shooting third round five-under-par 67 at the PGM Sabah Championship on Friday.

Co-overnight leader Sattaya compiled a three-day total of 11-under-par 205 to lead from Ireland’s Niall Turner, who returned with a 67 at the Sabah Golf and Country Club.

Young talent Arie Irawan spearheaded the local charge when he posted a 71 to take third place on 209 while Thailand’s Pavit Tangkamolprasert was a further shot back after registering a 72 in the RM250,000 (approximately US$80,000) Asian Development Tour (ADT) event.

Sattaya was flawless on his front nine where he sank three straight birdies starting from the second before adding two more birdies on holes seventh and ninth. He dropped two consecutive bogeys after the turn but recovered with two birdies on his way home.

He was thankful to his uncle, Nattawat, for sharing with him some valuable advice prior to his round, which kept him calm and collected despite the four-hour rain delay earlier in the morning.

“The conditions were tough because of the rain delays but I told myself to just have fun out there. I’m very pleased with how I have been playing so far so hopefully I can continue the good form tomorrow,” said Sattaya, who had claimed his breakthrough victory on the ADT last August.

“I had a chat with my uncle yesterday and he reminded me to just play my game and not think too much about being in the lead. He said I should play every round like it’s the first round so I can keep a fresh mind every time I go out there. I will try my best and not disappoint him tomorrow,” added the 30-year-old Thai, who is ranked 15 on the ADT Order of Merit.

Niall, who claimed his maiden ADT win in Jakarta two months ago, overcame a three-shot deficit to move into contention.

“I played solid today. I tried to get as many birdies as I can. My putting was good too. Hopefully I can keep up with the good form tomorrow. I had gained a lot of confidence in my game after winning my first ADT title in Jakarta. I’ve been playing solid since then,” said the Irishman, who marked his card with seven birdies against two bogeys.

The penultimate round of the PGM Sabah Championship was delayed by 90 minutes in the morning due to inclement weather. It was forced to suspend again at 10.37am before resuming two and a half hours later.