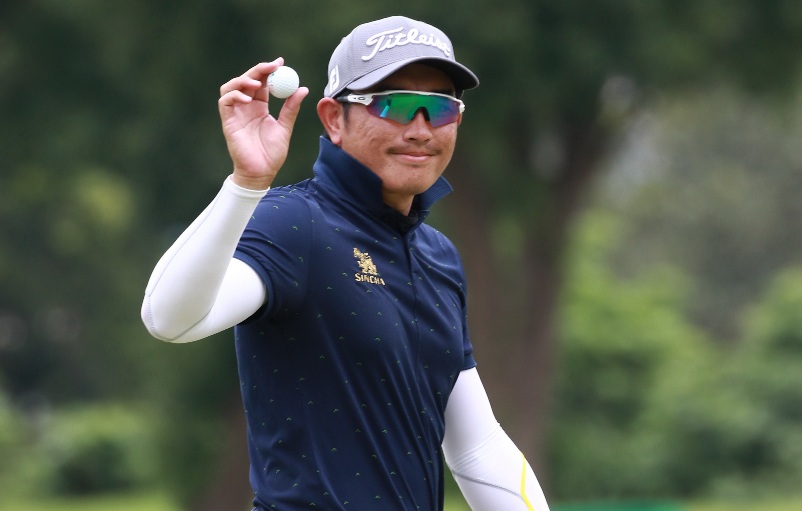 Thai prospect Sattaya Supupramai raced into a one-shot lead after nailing four birdies in his closing five holes for a solid five-under-par 67 at the halfway stage of the US$160,000 Taifong Open on Friday.

The 33-year-old Thai, who opened his campaign with a flawless 69, fired seven birdies against a double-bogey to sit atop the leaderboard with an eight-under-par 136 total, one ahead of compatriot Sorachut Hansapiban, who signed for a 69, at the Taifong Golf Course.

Overnight co-leader Panuwat Muenlek ensured a strong Thai presence on the leaderboard as he battled to a 71 to trail by two shots in third place alongside Australian Marcus Both, who returned with a second straight 69 at the Taifong Open.

Sattaya, a former two-time winner on the ADT but not since 2014, credited his new putter in the bag for a commendable round which puts him right in position to challenge for a third victory on the region’s secondary circuit.

He stayed bogey-free for 30 holes before stumbling with his only blemish on the par-four 13th hole where he hit an errant tee shot. The talented Thai, however, erased it straightaway with two consecutive birdies, including an uphill chip-in from 10 yards on 15.

“I was just trying to keep my ball in play. I didn’t think too much out there. I focused on every shot I made and I wasn’t too aggressive in attacking the pins. The greens are firmer and rolling a little bit faster today. I made a mistake on 13 but I told myself to keep going as it’s just one bad hole.

“I managed to bounce back with four birdies in my closing five holes. I had a great chip-in for birdie 15. It was an uphill chip from the right side. I hit good drives on 17 and 18 for birdies too. It was a great comeback and a superb finish to the round,” said Sattaya.

Sorachut made up for the disappointment of missing the halfway cut in the tournament last year by returning with a round of six birdies against a bogey and a double-bogey.

“I have been playing very consistently. I drove the ball very well today and my short game is on point too. I will play the same tomorrow. I am very excited because it’s the first time I am in contention. I will continue to do my best,” said the 26-year-old Sorachut.

Both, a three-winner winner on the premier Asian Tour, battled against the heat on a scorching afternoon at the Taifong Golf Course to make his move on the leaderboard.

“It was really hot out there and very demanding physically. Nothing really stood out. I just played pretty nicely. I had a long putt for birdie on sixth from about 40 yards. I kept the ball in play. I didn’t really make too many mistakes which was nice. This course can really bite you up if you hit a few loose ones.

“The wind directions have changed from what I remember last year. It’s good to come back and relearn the course. You need to control your golf ball to play well on this course. You need to be smart on where to hit your second shots,” said the 38-year-old Australian, who traded four birdies against a bogey.

A total of 54 players made the halfway cut set at one-over-par 145 at the Taifong Open, which is celebrating its fourth edition as the richest event on the ADT this week.

The winner of the Taifong Open will take home a winner’s prize purse of US$28,000 and receive six Official World Golf Ranking (OWGR) points while the top-six players and ties earn points on a sliding scale.