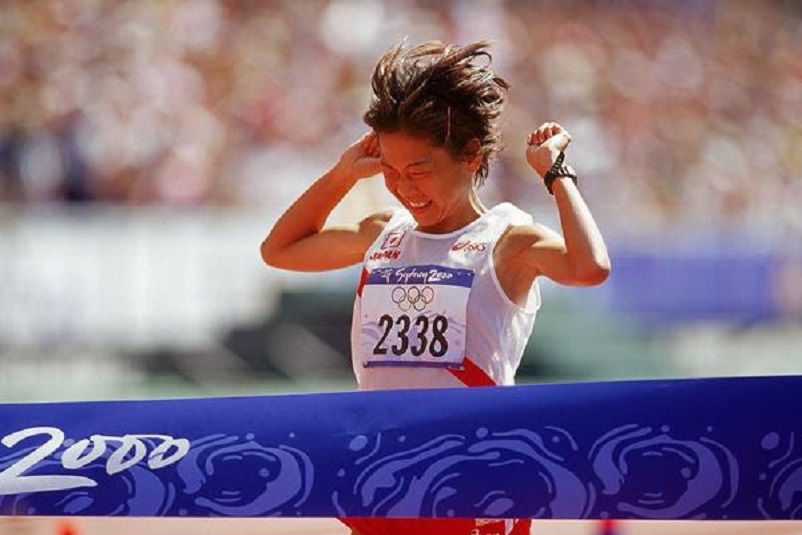 Naoko Takahashi, the first woman to run a marathon in under two hours 20 minutes, has become the latest athletics star to generously donate a competition item from their career to the World Athletics Heritage Collection.

Takahashi clocked an Olympic marathon record of 2:23:14 on 24 September 2000 to win at the Sydney Olympic Games. It was the first Olympic victory at the marathon by a Japanese woman and her Games record was not broken until 2012.

Takahashi moved to the front of the race at the 20-kilometre point along with her compatriot Ari Ichihashi and Romania’s Lidia Simon. Ichihashi dropped off the pace five kilometres later, leaving Takahashi and Simon to battle for the title. The two ran together until 35 kilometres when Takahashi broke away, quickly establishing a 30-metre lead. She extended it over the next five kilometres and although Simon narrowed it slightly over the waning two kilometres, Takahashi, wearing bib number 2338, went on to a comfortable victory.

It is that bib which she has very kindly donated today.

“I am happy to see my Sydney bib join the Heritage collection,” said Takahashi. “I would like the bib’s donation to help increase interest in the marathon, and the challenge and beauty of distance running. It might also help motivate more people to take up running for fitness and fun, or perhaps even competitively, picturing themselves in my shoes.”

Daughter of the Wind

There was no underestimating Takahashi’s national popularity and fame after her Olympic triumph. She was the subject of a comic strip entitled “Kazekko,” or “Daughter of the Wind”. Launched in May 2001, the strip told Takahashi’s life story and at its height attracted 700,000 readers weekly.

Takahashi’s career was inspired by the legend of Ethiopia’s two-time Olympic marathon champion Abebe Bikila. As she developed as a runner, Takahashi was also impressed by the running of Japan’s Yuko Arimori, who raced to Olympic silver in 1992 and bronze in 1996.

Yet it was only when her training partner Hiromi Suzuki won the 1997 world title in the marathon that Takahashi, who had debuted with a seventh place finish in 2:31:32 in Osaka in January of that year, truly believed that her future lay in the marathon.

Takahashi, who was coached by the late Yoshio Koide who last year was posthumously awarded the World Athletics Plaque, won the first of her two Berlin Marathon titles in September 2001 with a landmark 2:19:46 performance, a world best and the first time in history that a woman had broken 2:20 for the distance.

Estimates vary but it is believed that 55 million Japanese, nearly half of the country’s population, watched Takahashi’s Berlin race on television.

“I am really happy about the (Berlin TV audience),” Takahashi told The Japan Times in 2003. “It’s an honour that people still remember me, and you can tell that people’s awareness of the sport is big.”

“There are so many different sports these days and the level of viewership is a tribute to the people who came before me and built the marathon up and made it as popular as it is now. Being a part of that is amazing and I am grateful.” – World Athletics