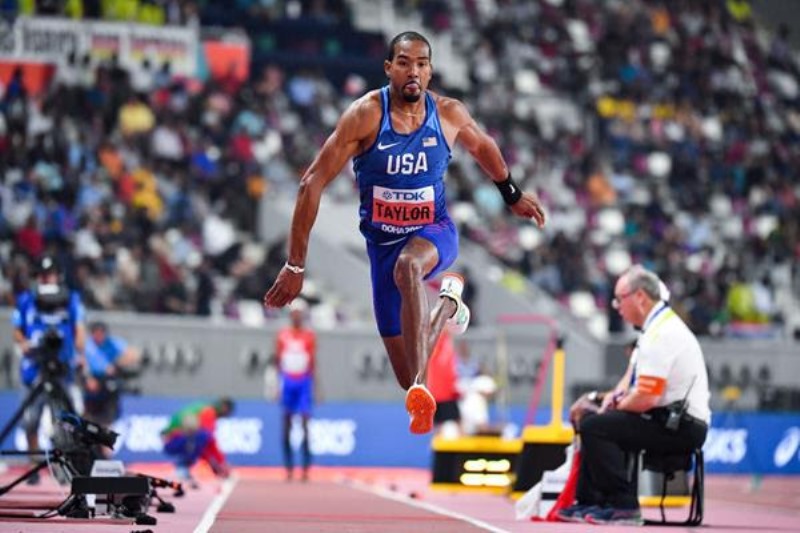 In 2018, at the Doha Diamond League meeting, Taylor became one of the first global champions to support the newly established Heritage Collection by donating a bespoke pair of spikes.

The 29-year-old star has now generously contributed one of his national team singlets and competition bib numbers from his victory in the same city at last year’s World Athletics Championships.

Taylor, with his fifth round 17.92m jump in Doha, retained his world title for the third time since first winning gold in 2011.

Taylor commented: “I was really impressed when I visited the huge heritage exhibition during the world championships in Doha last year. Situated in the shopping mall directly connected to our team hotel, it was great to have the chance to soak in the history of our sport.”

“Along with my spikes, on display from my event alone, was one of Adhemar Da Silva’s shoes from his second Olympic title in 1956, Jonathan Edwards’ 1995 world record bib number with the 18.29m distance marked out on the floor. A few metres further on was the uniform and spikes which Christian Olsson wore when taking the 2003 world title.”

“It was therefore a very easy decision to donate my world championship singlet and bib number to the collection. I’m very much looking forward to seeing them on display in Eugene in 2022,” concluded Taylor.

Before those world championships happen, Taylor sets out in Tokyo next year to match the triple Olympic crowns of Georgian Viktor Saneyev, who took his titles for the USSR in 1968, 1972 and 1976.