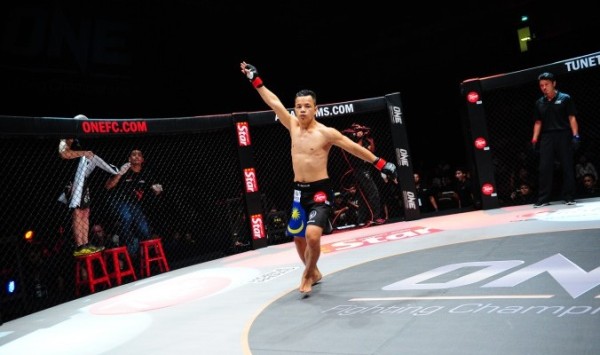 Saiful Merican is ready to take on Cambodia’s Khim Dima in the ONE FC: War of Nations.

SAIFUL MERICAN may seem like a soft spoken and gentle chap from Terengganu, but put him in the cage and he will transform into a fearless beast that can knock you out cold!

This ONE FC Fighter and Tune Talk warrior has fought over 100 Muay Thai fights and is nicknamed “The Vampire” because he is known to be fast and deadly in his battles. Saiful took some time to share with us on his preparation and strategies for his upcoming ONE FC: War of Nations fight, against Cambodian Flyweight fighter, Khim Dima, and also why we should look forward to this highly anticipated MMA fight event of the year.

2. How’s the preparation for the upcoming fight?

I am training real hard and putting in additional hours to polish up my Muay Thai skills at my gym. I’ve also been working around with other fighters to improve on my ground techniques.

3. What is your strategy for this round?

It really depends on how it all goes down when we are in the cage, so I will improvise my strategies accordingly during my fight. My coaches and team have prepared me to be anywhere – standing or ground. So I will do my best.

4. What do you think about your upcoming fight and opponent Khim Dima?

As a Khun Khmer (Cambodian Kickboxing) champion, Khim Dima is one of the best in his disciplines and I have my experience in Muay Thai. So I think it will be very interesting to see how two fighters with similar martial arts backgrounds in the cage. I have faced him before in a Khun Khmer fight, but fighting in the cage is a totally different ball game. I believe his strategy would be to remain standing with a lot of striking but we shall see how it goes.

5. ONE FC: War of Nations is described as the best card Malaysia ever had. What do you think?

Yes, there is the highly anticipated ONE FC Welterweight World Championship fight between Suzuki and Larson and also a rematch between the two female fighters, Ann Osman from Malaysia and Sherilyn Lim from Singapore. It is a very exciting card and I know many have already secured tickets.

6. Any particular fight that you are excited about on the card? Why?

I am looking forward to the main card because it is a clash of two veteran fighters. I am rooting for Suzuki to win via knockout. I believe he has the power to take down Larson.

7. Who would you like to fight after Khim Dima?

I do not have anyone in particular, but I like versatile opponents who gives a good fight.

I will bring my best to the cage so be ready for an explosive fight!