Home 2020 Inside the Mercedes-Benz Museum: The steering wheel 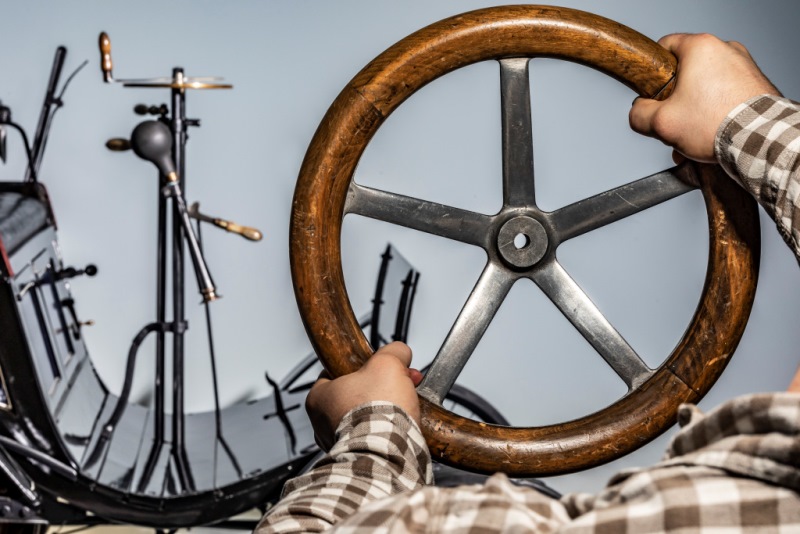 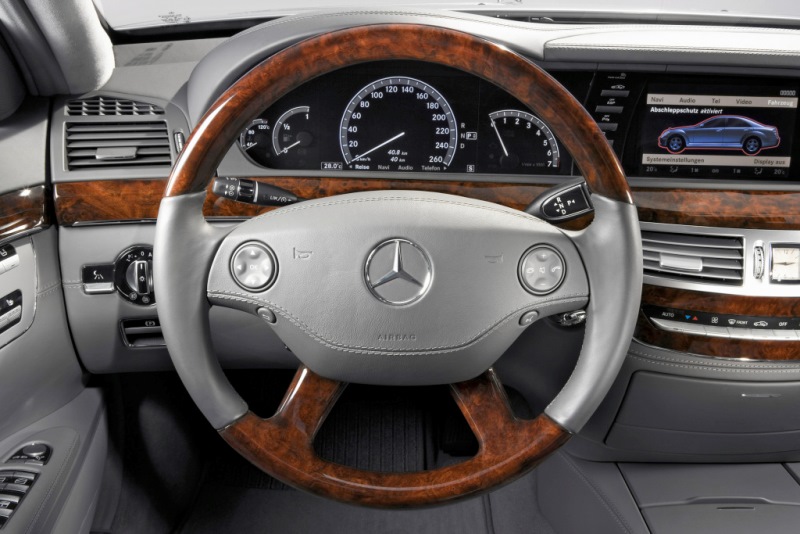 Stuttgart. One hundred and sixty vehicles and a total of 1500 exhibits are presented in the varied permanent exhibition of the Mercedes-Benz Museum. The “33 Extras” are a particular highlight: They can bring the history of personal mobility and motoring culture to life using details that are often surprising. The Mercedes-Benz Museum Inside newsletter series draws attention to the “33 Extras” and focuses on their background stories. Today’s issue is about the steering wheel.

1 – Precision: In 1894, the motorcar was fitted with a steering wheel for the first time. It celebrated its première in the first motorsport competition in history – the race from Paris to Rouen. French engineer Alfred Vacheron equipped his Panhard & Levassor vehicle, powered by a Daimler engine, with a steering wheel. Compared to the control levers that had been used up to that point, the steering wheel allowed him to steer more accurately – and therefore also to increase his speed. His steering wheel consisted of a circular grip ring connected to the steering column by spokes – a basic principle which is still valid to this day.

2 – Crank or handlebar: Before the steering wheel became the norm at the turn of the century, there were many solutions, including some that resembled bicycle handlebars. In his three-wheeled Patent Motor Car of 1886, Carl Benz used a rotary crank that transmitted the driver’s steering action to the steering column. Gottlieb Daimler equipped his four-wheeled motor carriage from 1886 with a cross-shaped handle.

3 – Importance: In the end, the steering wheel prevailed quite simply because it could be operated intuitively. Along with the pedals and seat, it is the most important interface between the driver and the car. Key advantage: It was possible to determine the exact driving direction much more accurately than with levers because the wheel principle allowed the steering lock to be translated through the gearing into several revolutions.

4 – Additional functionality 120 years ago: On the Mercedes-Simplex models, from 1902 on, the steering wheel was equipped with levers that were used to adjust important engine functions ─ in particular, ignition timing and mixture formation. In the 1920s, a steering wheel ring for operating the horn was added – an early implementation of Car-2-X communication, so to speak.

5 – Additional functionality today: Today’s steering wheels are used to operate numerous systems, such as the on-board computer, voice control, telecommunications and multimedia. In addition, there are a number of stalks arranged in the immediate vicinity. In the summer of 2020, Mercedes-Benz will be presenting the next generation of the steering wheel as a command centre – the capacitive steering wheel with digital control zones.

6 – Ergonomics and emotion: There are considerable technical demands placed on the steering wheel – and the tactile experience. If the steering wheel is not perceived as pleasant to touch, this can have an effect on the way the vehicle is driven. In addition to the materials, the design also plays an important role.

7 – Ideal location: Steering wheel ergonomics also includes its position in the vehicle. The Daimler Phoenix racing car from 1900 and the innovative Mercedes 35 hp from 1901 had already proved this point: Their steering columns were inclined much more than before. This made it possible to steer the cars much more effectively and more dynamically. This contributed both to driving safety and also to the overwhelming sporting success of the Mercedes 35 hp in Nice Week in 1901.

8 – Size and weight: The first steering wheels provided a fair guide as to how big and heavy a vehicle was. Trucks, buses and representation vehicles initially needed enormous steering wheels. This was the only way to generate sufficiently large leverage from pure muscle power to achieve the necessary steering force. This can be seen very clearly on the Mercedes-Benz O 10000 in the Mercedes-Benz Museum (Collection Room 2, the “Gallery of Carriers”): The steering wheel is huge. It was not until the advent of power steering that it became possible to make steering wheels in large vehicles smaller. That development began in passenger cars. The Mercedes-Benz 300 was the first saloon car, in 1958, to be fitted with such a system. From the 1960s onwards, Mercedes-Benz commercial vehicles were also equipped to an increasing extent with power-assisted steering.

9 – Padding: Mercedes-Benz is a pioneer in passive safety. As part of the safety concept implemented in 1959 in the W 111 model series, the “tail fin” saloon was the first to feature a steering wheel with a large, padded impact cushion, which reduced the risk of injury. In 1967, Mercedes-Benz introduced safety steering with a telescopic steering column and impact absorber as standard equipment for all vehicles. Then, in 1981, the driver’s airbag fitted in the steering wheel was introduced. This world-first innovation in production cars was introduced by Mercedes-Benz in the S-Class model series 126.