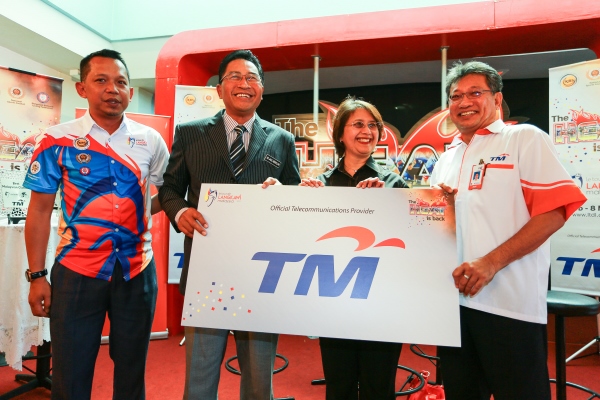 NATIONAL telecommunications giants Telekom Malaysia Bhd (TM) will continue their association with Le Tour de Langkawi (LTdL) this year, with the focus placed on bringing the best out of local talents.

TM will again provide incentives for the best Malaysian riders in the 19th edition of the race, which will be flagged off in Langkawi on Feb 27 and ends on Mar 2 in Kuala Terengganu.

“TM are proud to bring the three awards again this year to recognise the best amongst our Malaysian riders. This portrays our continued commitment towards the development of our local athletes, specifically in cycling, and we hope all Malaysian riders participating in LTdL will give their best to get their hands on the awards while maintaining healthy competition spirit and sportsmanship,” said Dato’ Rozalila.

While the 11 Malaysians competing in this year’s race will also be eager to challenge for the overall, points, mountains and Asian riders’ classifications, TM will add spice to the challenge by offering again awards for the best Malaysian rider overall, sprinter and best climber.

“For me, I’ve been fired up for this race since we began preparation for the new season. I’m really determined to win a stage this time around. It will be an exciting battle with Anuar to emerge the Best Malaysian sprinter, but you can’t discount the other riders,” said Harrif, 25.

Loh Sea Keong, who emerged the Best Malaysian Climber last year, will not be around this time as he will be beginning his season with Dutch UCI Pro Team Giant-Shimano.

The battle for the best climber will thus be expected to be between Adiq, another of his teammates Saufi Mat Senan and the Malaysian national team’s pair of Mohd Fauzan Ahmad Lutfi and Nik Mohd Azwan Zulkifle.

This edition of LTdL is set to cover a total distance of 1,507.9km over 10 stages, the UCI 2.HC (hors category) race featuring again as one of the biggest events on the UCI Asia Tour calendar.