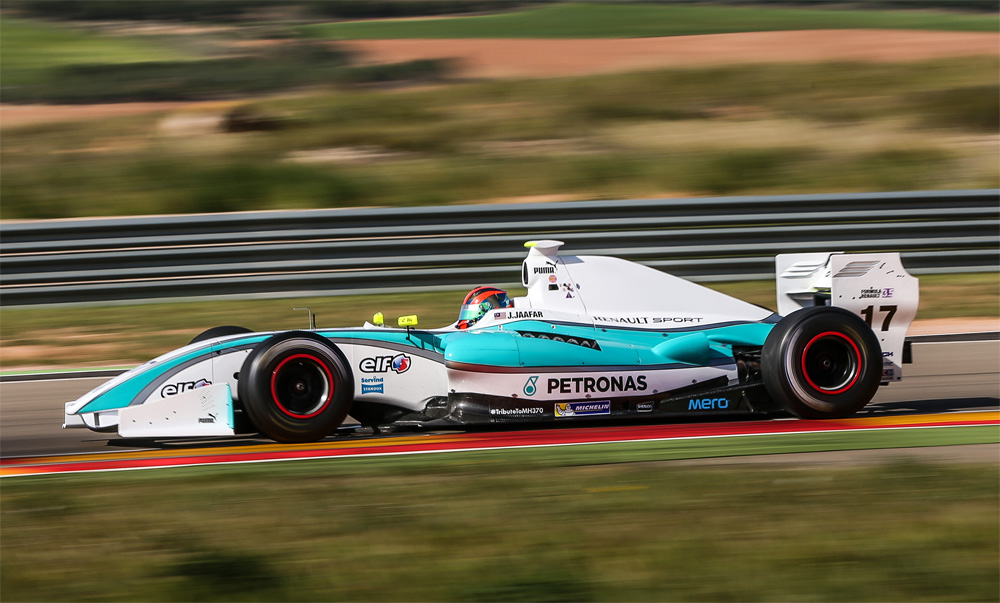 The two practice sessions held on Friday was an opportunity to prepare for the two races and Jazeman worked through a programme with his engineers during the sessions and recorded eighth fastest lap in each.

Qualifying for the first of the two races was held on Saturday morning. Jazeman, a PETRONAS Talent Programme driver, struggled for pace after a sudden drop in engine power, finishing the session 11th fastest. With no time to make any major changes, Jazeman took his place on the sixth row of the grid, aiming to have as strong a race as possible, having opted to make downforce set up changes to try and improve his pace. He made a good start and held position for the first few laps, but then dropped back two places. As the race progressed he began to struggle with rear tyre wear, which hampered any chance of improving on his race position. He finally crossed the line in 13th place.

Jazeman said after the race yesterday, “It was a struggle today. Qualifying wasn’t good and I felt that we didn’t have the engine power we should have and I just didn’t feel we had the pace we should have had. Added to this, I had quite a bit oversteer which meant my rear tyres went off fairly early in the race, so I just had to focus on bringing the car home in as best position as I could.”

Qualifying for the second race was held in dry conditions this morning and after some hard work from the ISR crew, Jazeman was pleased to report that the car felt much better and his confidence translated into sixth fastest time for a third row grid slot.

Jazeman had another good start and had improved to fifth in the early stages until the mandatory pit stop for a tyre change. Problems with an air gun delayed the change of the rear right tyre, losing him 2.5 seconds and costing him a number of places on the track. The 21-year-old Malaysian kept calm and set about putting in a string of strong lap times to make up ground. He was able to make passes on Pietro Fantin and Norman Nato in the closing stages and took the chequered flag in ninth position, adding two valuable championship points to his tally.

Jazeman reflected after the race, “That was much better than my first race, but obviously disappointing to have had the problems in the pitstop. I’m very pleased to have scored more points this weekend and put in a top ten finish. The car set up for the second race gave me a strong pace and I was able to use this to overtake two cars and get myself into the top ten, which was very satisfying”.

Jazeman will now turn his focus to the next round, the jewel in the crown of the championship, a street race in Monaco, supporting the Formula One Monaco Grand Prix.