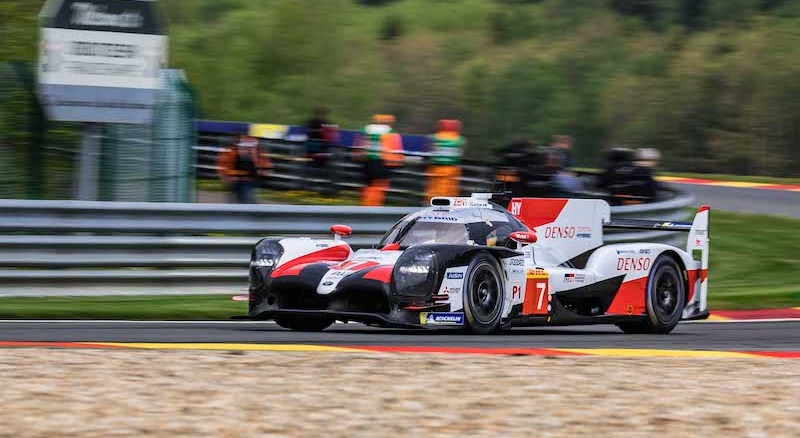 It is the third win for the Japanese squad at Silverstone and despite Mike Conway having won nine WEC races, it marks the first victory for the British driver at his home event. A total of 49,600 enjoyed Silverstone for the WEC season-opener where 20 British drivers represented their home country.

Toyota claimed the LMP1 runners-up spot with the two TS050 Hybrid LMP1 No. 7 and No. 8 crews separated by just under 2 seconds as they crossed the finish line.   The two Toyotas swapped positions on several occasions, with Kobayashi passing Brendon Hartley at the race’s half-way point following a brief spell of rain.

The third podium spot was taken by the No. 3 Rebellion Racing R13 – Gibson car with Nathanael Berthon, Pipo Derani and Loïc Duval at the wheel.  Rebellion’s sister No. 1 car finished fifth after losing time due to a puncture.

Team LNT’s No. 5 and No 6. Ginetta G60-LT-P1 AER cars were fourth and sixth respectively.  The opening hour saw plenty of drama for the British squad as the No. 6 car lost its right-rear wheel before returning to the pits again shortly after.

The highly-competitive LMP2 category which has a total of eight teams for Season 8 – including four brand new squads – saw newcomers Cool Racing take a win on their WEC debut.

The victory was made even more impressive considering the Oreca 07 Gibson car lost one of its crew after team-mate Alexandre Coigny was forced to sit out due to an injury he sustained during yesterday’s ELMS race. This left Nicolas Lapierre and Antonin Borga to bring the No. 42 car home 49.311s clear of runners-up Signatech Alpine Elf in the No. 36 Alpine A470 – Gibson car driven by Thomas Laurent, André Negrão and Pierre Ragues.

Third place finishers Racing Team Nederland made up of Frits Van Eerd, Giedo Van Der Garde and Job Van Uitert had a strong advantage at the race’s half-way point in the No. 29 Oreca but the race’s second safety car allowed Cool Racing to take the lead where they remained for the rest of the race.

United Autosports’ WEC debut got off to an unfortunate start after the British team were forced to retire early in the race due to a mechanical issue with Paul di Resta at the wheel.  Elsewhere WEC debutants Cetilar Racing finished sixth in a Dallara P217 – Gibson.

Full results can be found HERE.

Next up in the FIA WEC calendar will be Japan for the 6 Hours of Fuji (5-6 October).