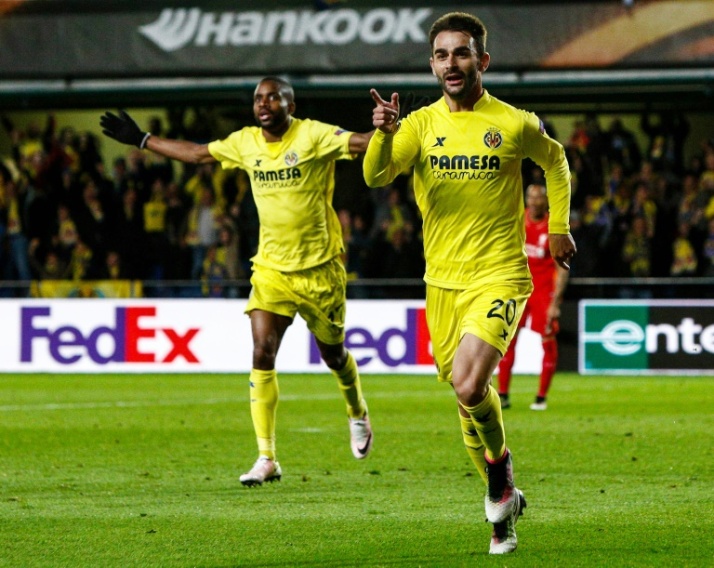 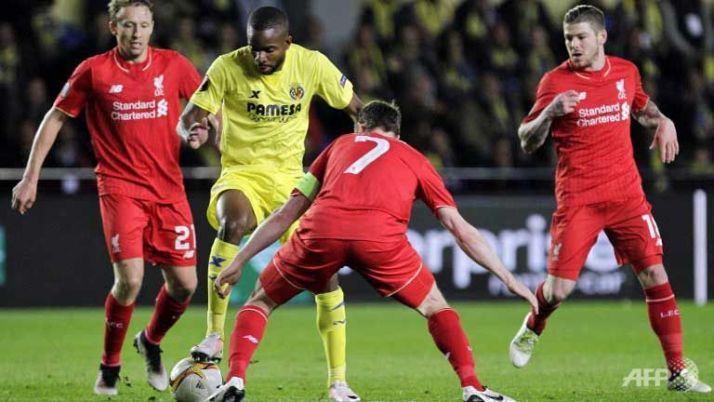 Adrian Lopez’s stoppage-time winner put Villarreal on the verge of reaching their first ever Cup final with a 1-0 win over Liverpool in the first leg of their Europa League semi-final on Thursday.

A game of few chances was decided by a brilliant goal at the death as Denis Suarez unselfishly squared for substitute Lopez to tap home from close range.

Roberto Firmino fired Liverpool’s best chance against the post in the second-half as Jurgen Klopp’s men now need another famous European comeback at Anfield to reach the final in Basel on May 18.

Sevilla are well-placed to reach a third consecutive Europa League final as they drew 2-2 away at Shakhtar Donetsk in the other semi-final.

Klopp was left frustrated at the manner at which Liverpool conceded late on having been seconds away from a creditable draw that would have given them the upper hand heading into the return leg.

“Of course I’m not too happy with the goal we conceded in the last second,” Klopp told BT Sport.

“A counter-attack in the 92nd minute doesn’t make too much sense to be honest, but it’s only the first leg. We had no luck today and they know how strong we are at Anfield.”

However, Villarreal boss Marcelino claimed his side were more than deserving winners.

“I am tremendously proud of this squad and we are closer to the final, still far away, but closer than we were in the 88th minute,” he told BeIN Sports Spain.

“It is very important to beat a team like Liverpool and, moreover, deservedly so.”

The 96 Liverpool fans who died at the Hillsborough tragedy 27 years ago were remembered before kick-off days after the biggest inquest in English legal history found they had been unlawfully killed.

Once the action got underway, Liverpool had the first chance when Joe Allen’s low shot from Adam Lallana’s deflected cross was placed too close to Sergio Asenjo.

Villarreal went onto enjoy the better of an intense first-half short on goalmouth action.

Former Tottenham Hotspur striker Roberto Soldado pulled the best chance of the half wide on 10 minutes.

Thomas Pina forced Simon Mignolet into a smart save low to his left before a curling effort from Soldado hit the side-netting.

Liverpool suffered a blow at half-time when Coutinho was forced off to be replaced by Jordan Ibe.

Villarreal were inches away from opening the scoring a minute into the second period when Cedric Bakambu’s header came off the post.

However, Liverpool also hit the woodwork at the other end with their best chance of the game 25 minutes from time when Firmino’s low shot was brilliantly turned onto the post by Asenjo.

The game suddenly opened up in the final 10 minutes as Mignolet producing a stunning save to prevent Bakambu adding to his nine Europa League goals this season.

Yet, from the resulting corner Liverpool pounced on an error from Suarez and Alberto Moreno bore down on goal before firing wildly off target.

Suarez atoned in fine fashion deep into stoppage time as he trapped Bruno’s pass to burst through the Liverpool defence before picking out the unmarked Lopez for an easy finish.

In the other semi-final Vitolo got Sevilla off to a perfect start when he fired between Andrey Pyatov’s legs early on.

The Ukrainians turned the game around before half-time through Marlos and Taras Stepanenko.

However, Kevin Gameiro’s penalty eight minutes from time gives Sevilla a huge advantage ahead of the return at the Sanchez Pizjuan in a week’s time.