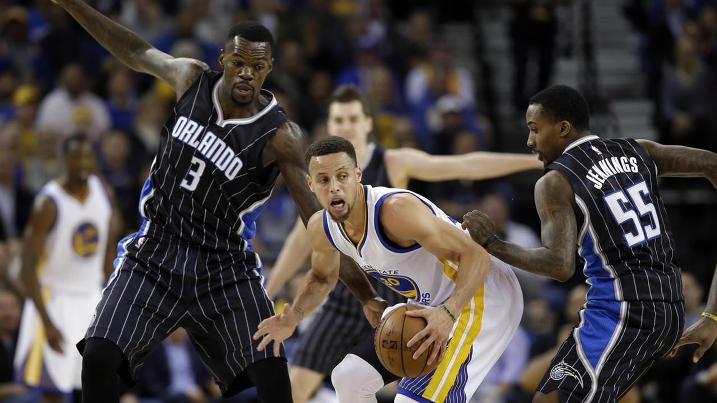 The Golden State Warriors notched another milestone win in a season full of them on Monday as the teams reckoned most likely to challenge their NBA dominance — Cleveland and San Antonio — endured upset defeats.

One day after they were humbled by the lowly Lakers in Los Angeles, the Warriors rebounded with a 119-113 victory over the Orlando Magic to stretch their regular-season home winning streak to an NBA record 45 games.

The Warriors haven’t lost on their home floor in Oakland, California, since January 27, 2015, and improved on the record of 44 straight home triumphs set by the Michael Jordan-led Chicago Bulls over the 1994-95 and 1995-96 seasons.

Stephen Curry scored 41 points. With seven three-pointers he took his total for the season to 301 — the first player in NBA history to hit more than 300 from beyond the arc.

The Magic tested Golden State’s resolve, closing within two points at 111-109 with 1:13 remaining.

But Thompson turned a broken play into his fifth three-pointer with 52.5 seconds left and the Warriors held on for the win.

The celebration that ensued was a far cry from the post-mortems being conducted by Cleveland and San Antonio.

LeBron James and the Cavaliers were shocked 106-103 by the short-handed Memphis Grizzlies in Cleveland.

San Antonio had their eight-game winning streak snapped as they fell 99-91 to the Indiana Pacers in Indianapolis.

Monta Ellis scored 26 points, including 21 in the second half, and Paul George added 23 for the Pacers, who took advantage of the San Antonio’s early scoring struggles to take a double-digit lead, then thwarted the Spurs’ attempt to rally late.

Spurs coach Gregg Popovich wasn’t on the sideline to see his team’s first defeat at Indiana since the 2006-07 season, missing the contest attending to a family medical matter.

“It was a rough night shooting for us,” said assistant coach Ettore Messina, who filled in for Popovich. “We were just not as sharp as we could have been.”

Tony Allen returned from a knee injury to score a season-high 26 points for a Memphis team missing five regulars — including their top trio of Marc Gasol, Mike Conley and Zach Randolph.

The Cavaliers committed a season-high 25 turnovers, unable to apply any real pressure until the fourth quarter.

“I don’t care who you’re playing,” James said. “It could be my son’s little league team and you’re going to lose when you give up that many turnovers just from carelessness.”

Cleveland’s Kyrie Irving did have a chance to force overtime, but his three-pointer at the buzzer bounced off the back of the rim.

Irving scored 27 points, including 14 in the fourth period. He gave the Cavaliers their first lead of the contest with 2:39 remaining.

From there the teams traded the lead four times before Memphis put it away.

Allen beat James on a jump ball in the final minute and Cleveland’s Matthew Dellavedova was whistled for an off-the-ball foul during a Memphis inbounds pass, giving the Grizzlies one shot and possession.

James finished with 28 points, nine rebounds and five assists. No doubt it was little consolation that in taking his career points total to 26,406 he moved past John Havlicek for 13th place on the all-time scoring list.

It was a frantic finish in New Orleans, where Anthony Davis scored 31 points and pulled down 10 rebounds as the Pelicans erased a 17-point second-half deficit to beat the Sacramento Kings 115-112.

In Chicago, Pau Gasol’s triple-double of 12 points 17 rebounds and 13 assists helped make up for the absence of Jimmy Butler in the Bulls’ 100-90 victory over the Milwaukee Bucks. – Agence France-Presse