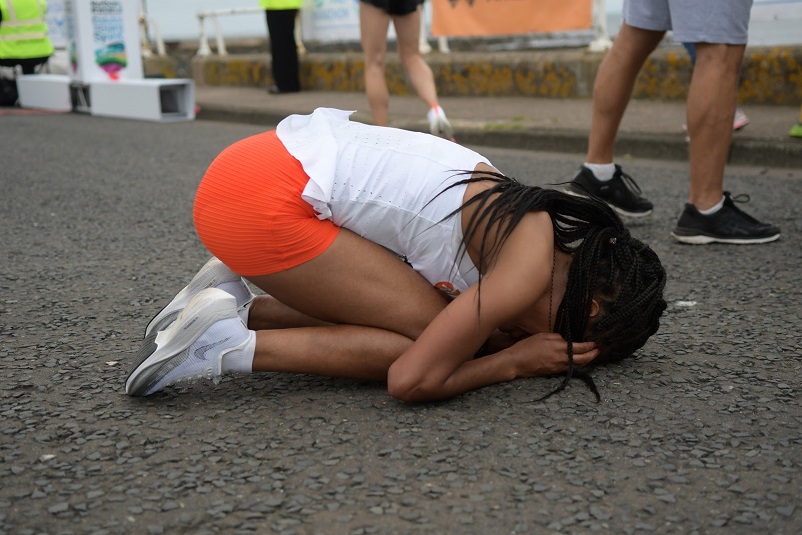 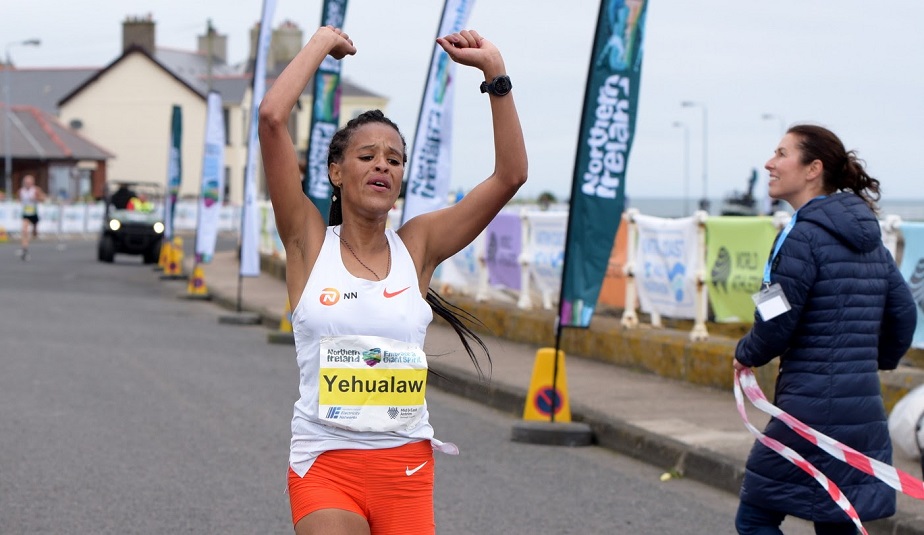 Less than five months after finishing second in Istanbul behind Ruth Chepngetich’s world record of 1:04:02, it was Yalemzerf Yehualaw’s turn to make history.

Running 1:03:44* at the Antrim Coast Half Marathon, a World Athletics Label Road Race, in Larne, Northern Ireland, on Sunday (29), the 22-year-old Ethiopian took 18 seconds off that world half marathon record set by Kenya’s world marathon champion Chepngetich on 4 April and her emotion at doing so was clear.

Yehualaw punched the air as she crossed the finish line and then the tears began to flow as she curled up on the ground and the magnitude of what she had just achieved began to sink in.

“It is a dream come true,” she told her NN Running Team. “Something I have worked for all my life.”

From making her international debut in 2019 to now being the only woman to have ever run under 64 minutes for the half marathon, it has been quite a journey for Yehualaw.

In Larne she was supported by pacemakers Roy Hoornweg and Mohamed Ali and the record looked on from the start. They reached 5km in 15:05 and 10km in 30:22 before 15km was passed in 45:24, with Yehualaw still looking comfortable.

Her intent was obvious and she continued to push the pace, with the world record in her sights.

“I was frustrated after not getting it (the world record) in Istanbul,” Yehualaw added, “but I am extremely happy now!”

Yalemzerf Yehualaw may only have been running internationally for the past couple of years but her journey in the sport began when she was at school. Growing up in West Gojjam, in a village in the Amhara region of Ethiopia north of Addis Ababa, she was the eldest of six siblings and showed her talent for athletics with wins on the track, road and cross country.

Winning 3000m and 5000m youth titles, the NN Running Team has explained, saw her talent recognised and she formed part of the Ethiopian Athletics Federation Academy system in Addis Ababa.

Then in 2017 she joined coach Tessema Abshero. “Many Ethiopian athletes have a natural gift,” Abshero told the NN Running Team, “but Yalemzerf had three very good qualities; speed, endurance and good core strength.”

Yehualaw worked towards her first overseas race, which was to be the 2019 Rabat Half Marathon. There she ran 1:09:13 to win by almost three minutes and then she returned to Ethiopia to compete over 10,000m on the track at the Ethiopian Championships, finishing fifth in 32:21.0 in a race won by Letesenbet Gidey, who would go on to break world records in the 5000m and 10,000m.

Later that year Yehualaw secured a place on the Ethiopian team for the African Games, which meant a return to Rabat and another win as, clocking 1:10:26, she broke the Games record. Her next race was the Delhi Half Marathon, where she improved her PB to 1:06:01 before a 10km win at the Great Ethiopian Run (31:55). She brought 2019 to a close with another win, clocking 1:07:34 at the Xiamen Half Marathon in China.

The year 2020 started with a sixth-place finish at the Ras Al Khaimah Half Marathon despite stomach problems and she continued her preparations for the World Athletics Half Marathon Championships in Gdynia, Poland. But the pandemic forced the global event’s postponement and Yehualaw went back to train in her home village. Groups gradually returned to training in Addis Ababa and Yehualaw’s focus remained on the World Half Marathon Championships, rescheduled for October.

Her coach believed she could win a medal there and he was right, as Yehualaw improved to a PB of 1:05:19 to get bronze, despite slipping in the closing stages, as race winner Peres Jepchirchir ran a women-only world record of 1:05:16.

Just six weeks later, Yehualaw was back in action at the Delhi Half Marathon and this time she claimed the win, again running a PB of 1:04:46 which at that time was the second-fastest ever women’s half marathon. She ended the year in style by winning the Nationale-Nederlanden San Silvestre Vallecana 10km in Madrid in 31:17.

Yehualaw picked up from where she left off in 2021, winning the 10,000m at the Olympic candidate trial competition before a return to the roads. In Istanbul in April she went quicker still in the half marathon, improving to 1:04:40 for a time which then placed her third on the world all-time list.

Her Olympic hopes were dashed when she placed fourth in the Ethiopian Trials 10,000m and did not make the team for the Games in Tokyo but she instead put her energy into her next road race – the Antrim Coast Half Marathon.

After a spell spent training in Seefeld in Austria, Yehualaw made the trip to Northern Ireland with her eye on Chepngetich’s world record mark. She remained on pace throughout the race and her dream was realised when she crossed the finish line with a time of 1:03:44 on the clock. No other woman has ever run under 64 minutes for the distance.

“I have tried twice before to break the world record but it didn’t happen,” she said on the live BBC stream. “I’m so happy it happened today in Larne.”