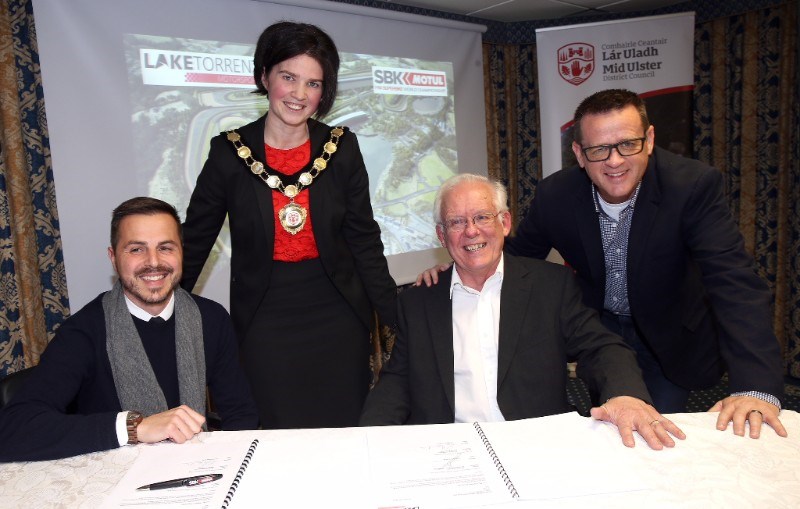 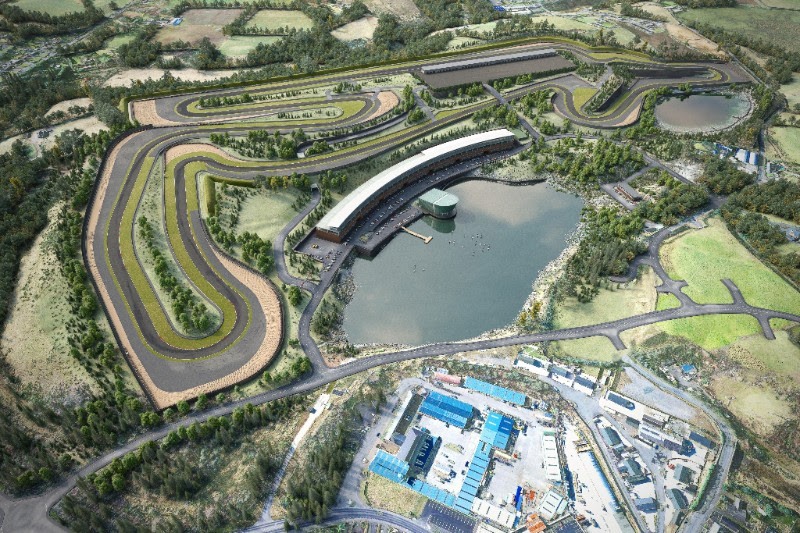 Developer Manna Developments and Dorna WSBK Organization today confirmed the signing of a three-year agreement to host the WorldSBK Races at the new £30m (€34m) Lake Torrent Circuit which is currently under construction in Coalisland, County Tyrone, just 40 minutes away from Belfast.

Lake Torrent is the brainchild of Manna Developments founder and motor-racing enthusiast David Henderson and is set to regenerate the Mid Ulster area through new jobs in the business, leisure and engineering sectors – as well as boosting tourism in County Tyrone and across Northern Ireland as a whole.

Designed by award-winning motorsport design firm Driven International, the development of Lake Torrent will transform 163 acres of former clay pits into a world class racing circuit and its creation will see WorldSBK visit Northern Ireland for the first time in the series history.

The WorldSBK Championship is one of the largest motorsport championships in the world.  Now in its 31st season, the championship is contested by 59 teams, visiting 12 countries and with global TV airtime in excess of 18,000 hrs.  Northern Ireland will join a list of host nations that currently includes Australia, Thailand, Spain, Holland, Italy, England, Czech Republic, USA, Portugal, France, Argentina and Qatar.

Currently in the early development stages, work is now under way on the Lake Torrent Circuit which will be 3.6km (2.2 miles) in length, featuring 12 corners with a width of 12-15m and elevations of +/-30m, accompanied by full supporting facilities.
Estimated to create 700 jobs in the 18 month construction phase, with longer term plans to build a further 90 retail and business units around the circuit, Lake Torrent will bring a huge financial boost to the Mid Ulster area and is set to become more than just a race track.

Motorsport fans will be treated to the full race weekend experience at the state of the art circuit – and weekends don’t come much bigger than the WorldSBK, as David Henderson of Manna Developments explains: “For the past 15 years it has been a dream of mine to build a motor racing circuit that incorporates the feel of the road with the safety of an international standard track – and also to bring the World Superbike Championship  to Northern Ireland,” said Mr Henderson.

“Having finally identified the perfect location and achieved planning permission last year, today sees the completion of that dream and is a day that will only be topped when we see up to 30,000 spectators converge in Coalisland for the first WorldSBK racing event in Northern Ireland.  They really don’t come much bigger than this. This is a historic milestone for the town of Coalisland, the county of Tyrone and indeed for the whole of Northern Ireland as we celebrate the realisation of our vision to create an internationally recognised motorsport arena which will become a venue for regional, national and international competitions for many years to come,” he added.

Reigning WorldSBK champion Jonathan Rea (Kawasaki Racing Team), who hails from Northern Ireland, is understandably thrilled about the agreement: “I’m so excited about this news because motorcycling in Northern Ireland has a huge heritage, right through from Joey Dunlop to myself and Eugene Laverty.  I’m very curious to see how the track is going to look, but I’m sure it will be very well attended because the fans over there love their bikes.  I can’t wait to get the chance to go there in 2019, and it’s an incredible way to nurture young talent.  I can’t wait to be involved and to fly the flag for Northern Ireland in this new adventure, and it would be nice to create a circuit that many people talk about as the best in the world.”

Mark Hughes, Managing Director of Mrk1 Consulting, who handled the WorldSBK contract negotiations on behalf of Manna Developments, was present at the signing ceremony.

“I’m thrilled that 12 months of hard work with Manna Developments, DORNA and the Mid-Ulster Council have paid off,” said Mr Hughes.  “The passion for two-wheeled racing in Northern Ireland is legendary and this circuit and this race will take that passion to new heights.  This event will have a huge economic impact on Northern Ireland, Mid-Ulster and Coalisland that will last for generations.”

Last September, Mid Ulster District Council granted planning permission for the first phase of work at Lake Torrent which includes the race circuit, pits, medical centre, restaurant, hospitality suites, six business units and a crèche, as well as a new public ring road to bypass the town and facilitate easy access in and out of the circuit.

Welcoming today’s announcement, Chair of Mid Ulster District Council, Councillor Kim Ashton, said:  “The development of Lake Torrent as a world class venue for motorsport is hugely important for Mid Ulster and its position has been boosted by news that a competitive event of the standard and reputation of the World Superbike Championship has been secured for three consecutive years.  I am delighted to have hosted a reception for the championship representatives and for those who are spearheading Lake Torrent and look forward to meeting and working with them as the project develops.”

Speaking at a reception in the Mid Ulster Council offices in Dungannon, WorldSBK Executive Director Daniel Carrera said: “We are delighted to be adding Northern Ireland as a destination for the MOTUL FIM Superbike World Championship.  The Lake Torrent circuit is a fantastic project that will deliver a high-class facility for competitors and visitors.  We are proud that Manna Developments and Mid Ulster representatives have chosen WorldSBK as their top event for the international promotion of the circuit and region.

“We know that the proper management of this kind of facility could provide the local community with new opportunities through business, job creation, leisure and tourism.  With the large tradition and culture in motorcycling in Northern Ireland, I am sure that this event could become a reference in our Championship in the near future.”