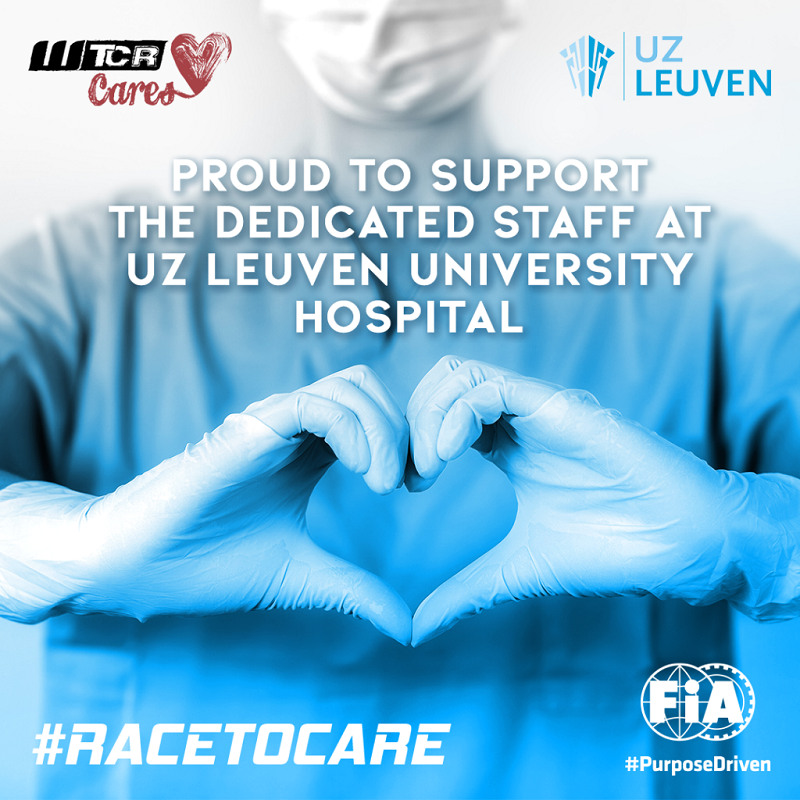 *Funds raised through Eurosport Events’ ‘€1 per racing kilometre’ pledge, plus phenomenal response from WTCR drivers *No time to lose: UZ Leuven University Hospital the first beneficiary as donation of funds brought forward to help in the fight against COVID-19 immediately *WTCR’s #RaceToCare campaign established under the FIA’s #PurposeDriven movement  *François Ribeiro: “The response from our drivers has been overwhelming, we are just so proud that the WTCR family is giving something back into local communities where we race”

The WTCR − FIA World Touring Car Cup’s #RaceToCare fundraising initiative is well on its way to achieving its €100,000 target after donations of €15,000 flooded in following the season-opening WTCR Race of Belgium weekend.

Eurosport Events had planned to pool together money raised at each of the six race weekends before dividing the amount at the end of the season between healthcare facilities of its choosing in Belgium, Germany, Hungary, Italy, Slovakia and Spain, the countries where the WTCR visits in 2020. But as François Ribeiro, the Head of Eurosport Events explained, there is no time to lose.

“Healthcare facilities need as much help as possible, the pandemic is far from over, so the sooner we can make donations, the better,” said Ribeiro. “We asked the FIA’s Medical Delegate for WTCR Race of Belgium, Dr Christian Wahlen, to help us select a healthcare facility which has been particularly exposed by COVID-19 and played a remarkable role in supporting the local population near Circuit Zolder in Belgium.  The UZ Leuven University Hospital has been working 24/7, seven days a week since January in the fight against COVID-19. They will receive a donation of €15,000, and we will select a local healthcare facility after each of the remaining events to help their cause.”

Ribeiro continued: “It was vital that we returned to racing with a clear purpose and the response from our drivers has been overwhelming. We are just so proud that the WTCR family is giving something back into the local community where we race. I’m very grateful to the WTCR drivers who very quickly agreed to get behind our fundraising initiative using their own money.”

What is the WTCR’s #RaceToCare?
In support of the FIA’s #PurposeDriven movement to return to racing with a clear purpose, WTCR promoter Eurosport Events will donate €1 for every kilometre completed by every all-season driver in every qualifying session and race in 2020. Drivers and other members of the WTCR community, plus stakeholders will be offered the opportunity to make similar donations with the goal of raising €100,000 by the end of the season. To find out more about the FIA’s #PurposeDriven movement and the call to action, go to: https://www.fia.com/news/fia-purposedriven-movement

The 2020 WTCR season continues at the legendary Nürburgring Nordschleife from September 24-26 when the fundraising push continues.