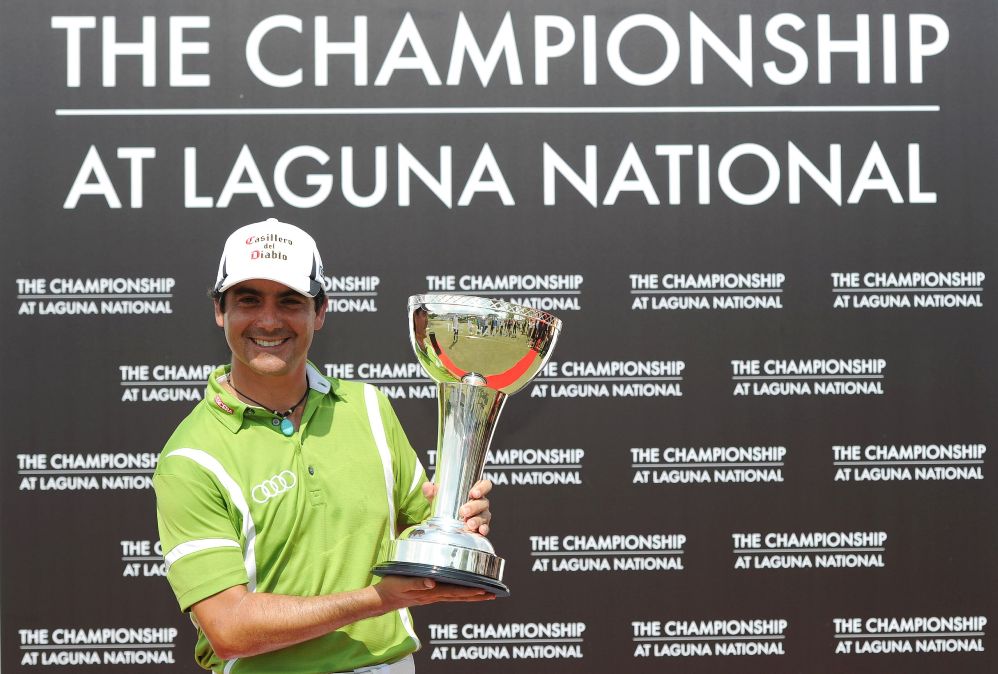 Chile’s Felipe Aguilar saved the best for last when he stormed home with a birdie-eagle finish to win The Championship at Laguna National on Sunday.

The Chilean’s stunning finish was for all to see when he raced home in just 28 shots to win The Championship with a spectacular 10-under-par 62 at the US$1.5 million event that is jointly sanctioned by the Asian Tour and European Tour.

Korean-American David Lipsky came up short by one and had to settle for second place alongside overnight leader Anders Hansen of Denmark after carding a 65 while India’s Rahil Gangjee savoured one of his best finishes in recent years by signing off with a similar 65 to take fourth place.

Aguilar once again showed his knack for winning in Asia as his previous victory before The Championship came in 2008 in Indonesia.

“I like playing in the heat more than the cold, and with my wrist injury the heat has helped me,” said the Chilean.

He wrote off his own chances after an outward-34 but started believing in himself when he went on an astonishing birdie blitz after the turn.

“I did not think I could win in the morning as I was only two-under-par after the front-nine and they were a little far away. But then I started making birdie, birdie on the back-nine and the spirit came back,” said Aguilar.

After his birdie run that got him to 19-under through 15 holes, Aguilar knew he needed a superlative effort to catch Hansen who was still holding a two-shot lead then.

“I told my caddie on nine if I can get going on the back-nine, I could do some damage and it ended up happening,” said Aguilar.

The Chilean’s magical show started when he sunk a 10-ft birdie putt at the par-three 17th and closed in dramatic fashion when he holed his approach for eagle at the last for a winning total of 22-under-par 266.

“On the 17th green I told my caddie if I make a birdie on 18, I might put some pressure on the leader and he said you might make two. I looked at him and he said that the way I’m hitting the ball I might make two and I did. It’s very, very special,” said the 39-year-old Chilean.

Lipsky’s wait for his second win on the region’s premier Tour was prolonged despite his best efforts to end his two-year title drought.

“I was still trying to do everything I can to win even on the last hole. I played really well this week. I only had four bogeys in four rounds and 23 birdies and 1 eagle in total. I’ll take that any week for sure,” said Lipsky.

While he missed out on his grandstand finish this week, Lipsky believes he will be back in contention following another top-10 finish on the Asian Tour.

“My game is in good shape now and I’m playing very well. I definitely gained a lot of experience from this week,” said the 25-year-old.

Gangjee’s determination to end his decade-long title drought on the Asian Tour showed when he raced home with an unforgettable inward-31.

After an outward-34, the Indian parred the next four holes before a flurry of birdies starting from the par-four 14 saw him close with a 65 that was to be his best score for the week.

“The last few holes went by in a hurry. My heart was beating fast on the 17th tee when I hit that six-iron. It ended on the edge of the green and did not move from there. I kept myself in it and it was a bonus that the putt went in. I think this is my best finish so far and my best four round score ever,” said Gangjee.

Gangjee knows it will not be longer before he returns to the winner’s circle but is looking forward to a well-deserved rest after The Championship.

“I think it’s my physical ability to carry on which has been tested this week. It was really difficult to stay focus out there in the heat as you get more and more tired towards the end of the round. I’m looking forward to going home now,” said Gangjee.

Leading scores after round 4 of the The Championship being played at the par 72, 7071 Yards Laguna National Golf Club (am – denotes amateur):