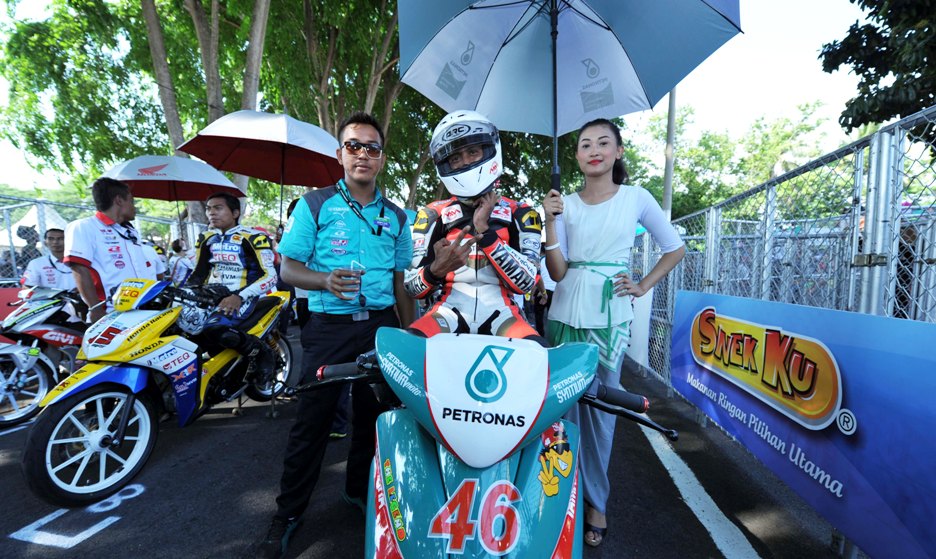 Seasoned contender, Ahmad Fazli Sham is determined to keep the momentum rolling as he heads to Stadium Sultan Mizan Gong Badak in Terengganu for Round Three of the 2014 PETRONAS AAM Malaysian Cub Prix Championship this 9 and 10 May.

Following three difficult seasons filled with inconsistencies, the Muar Cub Prix two weeks ago signalled the renaissance of the two-time CP130 Champion as he displayed masterful form to finish second, just 0.247 seconds behind rookie Ahmad Afif Amran who nicked away the chequered flag from his senior in the final moments of the race.

The PETRONAS Yamaha Maju Motor rider was further lifted by a strong run in the opening round of the PETRONAS Asia Road Racing Championship where he took victory in Race 2 of the Underbone 130cc class last month.

“It feels great to set foot on the podium again. The past few seasons has been tough on the team and last year I could only manage to get on the podium just twice in the first and final leg. Hopefully we can do more than that this season,” said Fazli Sham.

He added, “Of course, a victory in Muar would have been sweeter but I have to admit, Afif was really fast. I did everything I could to hold him back but in the last lap he saw an opening and immediately dived for it.”

Fazli Sham and his crew also believe they have turned the corner on bike set-up and intend to use their recently gained knowledge to devastating effect this weekend.

“Last year we struggled a lot with setup but now we have one of the most competitive bikes on the grid. The engineers did a great job translating the data and rider input to produce a fast reliable bike. If we can keep this trend up, we can certainly be at the front again.

“At the same time I believe there is still room for improvement both on my side and the bike because as we can see Honda was very fast in Muar with Zaqhwan Zaidi topping all the elements except for the race. We need to bridge this gap quickly,” he added.

When asked about his targets for this season, Fazli Sham commented, “It would be great if I can win the championship for a third time but I think it’s too early to think about that. Right now I’m taking a race-by-race approach, trying to get as many podiums possible. I will think about the championship when the time comes.”