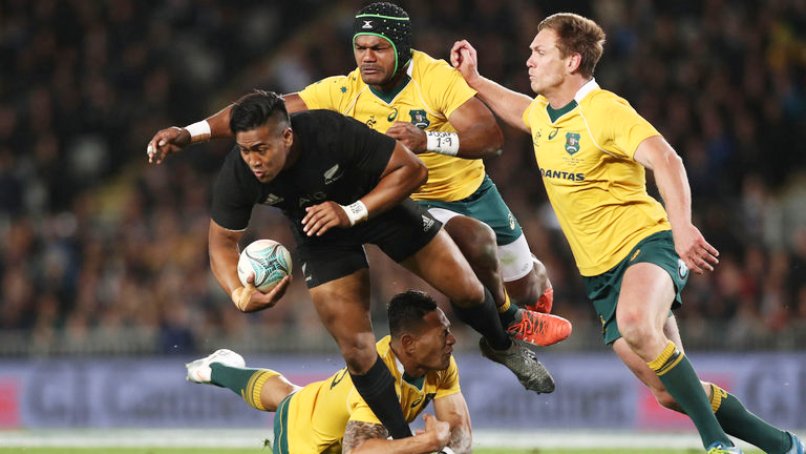 Julian Savea’s stunning late burst ended Australian resistance as the All Blacks claimed a world-record 18th consecutive victory with a crushing 37-10 win in Auckland on Saturday.

It was hardly vintage All Blacks and the tense game at Eden Park wasn’t settled until Savea’s game-breaking effort in the second half, scoring two tries and setting up a third.

But the ultimately convincing win rewrites the record books for Steve Hansen’s side, who surpass the top-tier record winning streak of 17 set by the All Blacks of 1965-1969 and matched twice since.

“(There was) a lot of build-up during the week, obviously a lot of talk in the media and everything. I think it will sink in later on but I’m really stoked,” said New Zealand captain Kieran Read.

“It took 30-odd minutes before we really opened them up so I’m really proud of the lads… (Australia) put us under pressure in certain areas. They played really well,” he added.

The All Blacks hit the front in the fifth minute when Israel Dagg scored and they never surrendered the lead, but for long periods Australia dictated terms and only stout defence earned the All Blacks their place in history.

They were only ahead 15-10 — after Australia had had a try disallowed by the TV match official — and defending constantly with 25 minutes to play when Savea burst into life.

There were questions ahead of the game whether the Wallabies would prove giantkillers, having stymied the All Blacks three times in recent years when the record was on the cards.

But Bernard Foley missed two close-range penalties and a Henry Speight try was disallowed when the TV official judged that Dane Haylett-Petty blocked Savea as he chased Speight.

For all their attacking flaws, sloppy discipline and rushed decision-making, the All Blacks scored six tries with Dagg, Anton Lienert-Brown, TJ Perenara, Savea (twice) and Dane Coles all crossing the line.

Aaron Cruden, brought off the bench early in the second half after Beauden Barrett missed the first three conversions, added seven points with the boot.

Rory Arnold scored Australia’s only try with Foley adding a conversion and penalty.

The Test record caps a remarkable 12 months in which the All Blacks became the first team to successfully defend the World Cup, retained the trans-Tasman Bledisloe Cup for a 14th consecutive year and won the Rugby Championship for the fourth time in five years.

Since Hansen took over as head coach after the All Blacks won the 2011 World Cup, the side has lost only three of 64 matches.

The Wallabies had the first opportunity to score only for Foley to hook a 33-metre penalty and the All Blacks responded immediately, exposing the Wallaby centres with two smart tries.

Ben Smith ran around Reece Hodge to put Dagg over wide out for the first touchdown and four minutes later Lienert-Brown, taking a short pass from Ryan Crotty, zipped past Samu Kerevi for the second.

For 15 minutes through the middle of the first half the Wallabies enjoyed a measure of control and they eventually broke the All Blacks defence when Arnold used all of his 2.08 metres (6ft 9in) to stretch out and score in the 28th minute.

They had a chance to turn it into a 10-point try, as Read was penalised in a confrontation on the line, but Hodge was astray with his long-range attempt at the restart.

The All Blacks struck back immediately with scrum-half Perenara charging down a Hodge clearing kick, regathering the ball and running in the All Blacks’ third try.

Foley landed a penalty early in the second half and Australia continued to keep pressure on the All Blacks until Smith broke out from his own 22 and set up Savea’s first try.

The big wing smashed through Speight and Nick Frisby for his second and then sent Coles over to settle the outcome. – Agence France-Presse