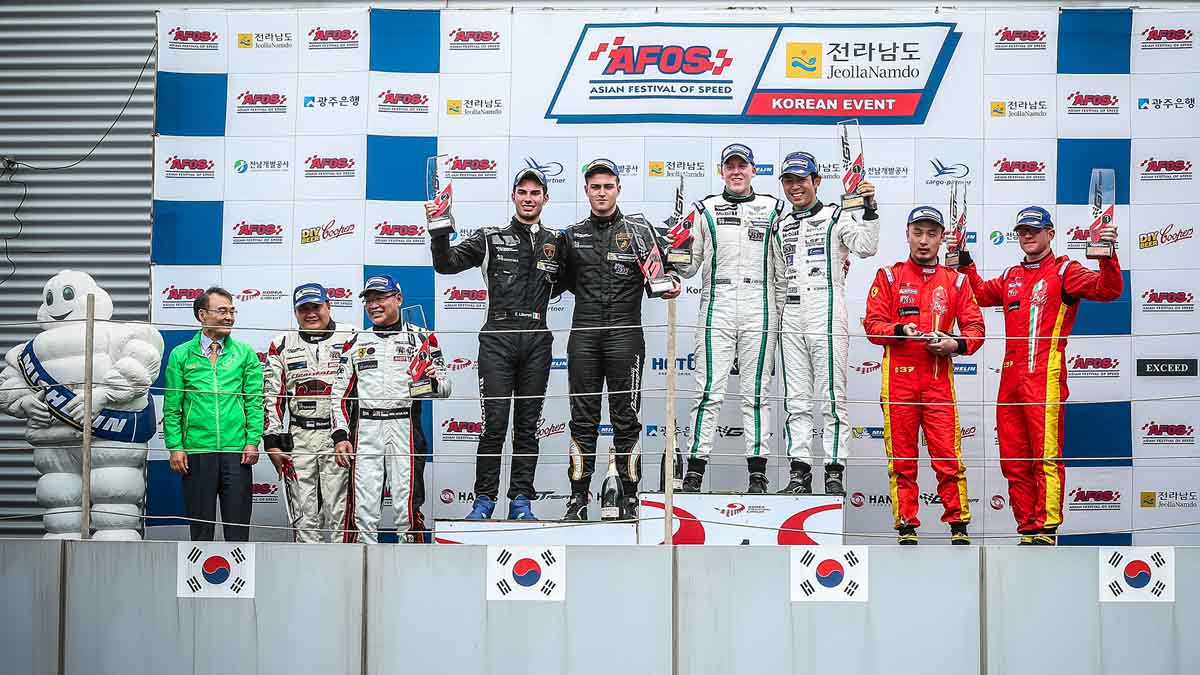 Ahead of the second South Korean round, the big question was about three of the cars that failed to complete the opening race; the Craft-Bamboo Porsche of Richard Lyons and Frank Yu, the new FFF Racing Lamborghini Huracan, and the #9 Absolute Team Bentley of Vutthikorn and Andrew Palmer.

The Bentley had been quick through practice, Palmer battling with US team-mate Adderly Fong for a spot in the top three, but ahead of qualifying, Absolute Racing reported an issue with the V8 powerplant, so elected to have a replacement unit flown in from the UK. It arrived just after midnight on Saturday night, with the team granted an opportunity to complete a single flying lap ahead of the second race by their rivals to ensure the systems were all working.

It was also good to see the two cars eliminated from the lead of the opening race return to the grid. The experienced Craft Bamboo Racing crew are no strangers to working quickly to repair a damaged car, and typically they had the #88 Interush GT3-R back on the grid for race two in pristine condition. So too the FFF Racing Team by ACM squad. They had a big task ahead of them after the contact between Edoardo Liberati and Richard Lyons in race one, replacing a door and recovering a lost side mirror fortunately their biggest concerns. They too had the car back on the grid ready for action.

Sadly by the time the team rolled around to prepare for a start, we’d lost two teams. Suttiluck ‘Bobby’ Buncharoen was robbed of a chance to take back the top spot in GTC from the Singha Plan-B team after a gearbox issue robbed him of a start, an issue which also sidelined opening race front-runner Andrew Kim.. Unfortunately, we were back to two Bentleys!

That was all the invitation that Keita Sawa needed, the Japanese driver forcing his way up the inside and into the lead on the exit, and from there it was essentially ‘game over’ for the Bentley driver’s rivals, Sawa extending his lead with every lap to pit at the compulsory pit stop [CPS] window 12-seconds up on his closest rivals.

Behind him one of the biggest movers was his team-mate, Vutthikorn who made short work of the field in the opening laps to move from rear of field to sixth in the #9 Bentley before handing over to team-mate Palmer.

With Sawa through to the lead, Lee and Liu then came under fire from Amici in the FFF Racing Lamborghini, the young Italian keen to make amends for the dramas that fell their way in race one. He actually drove around the outside of both Lee and Piti Bhirombhakdi on the exit of turn three, charging through to third behind Liu on the run down to turn four.

Piti fought back later in the lap, the two almost making contact at turn 14, the Ferrari driver then opening the door for Lee who took back the position with an inside move into 15. Watching all of this was ‘Rocket’ Richie Wee who had made a brilliant start to be shadowing the Lamborghini, the 2014 GT Asia Series ‘Rookie of the Year’ happy to watch the action unfold in front of him.

Further back, GT Asia Series rookie Naiyanobh Bhirombhakdi was battling hard in the VLT Craft-Bamboo Porsche, the young Thai driver not afraid to battle for position, his fight with both JingZu Sun and Alex Au in the two Audis one of the highlights of the opening stanza of the race before Sun had a spin at turn three.

By lap ten, Amici was all over Rizzo, the Lamborghini firing up the inside on the exit of turn one to take the lead, but by that stage the young Italian was almost 12-seconds down on race leader Sawa.

Whilst Sawa continued to circulate, the bulk of the field dived into pit lane as soon as the pit stop window opened, the BBT Ferrari team taking an immediate advantage by leap-frogging the Lamborghini – who stopped a lap later – despite having to make a tyre change during their stop.

Liberati though was soon onto the tail of the new Ferrari 488 charging around the outside to take second at turn 12 as Rizzo worked to get the tyres up to temperature.

Over the closing laps of the race, much of the focus was on the battle over fifth position, with the experienced Carlo Van Dam giving American Andrew Palmer a masterclass in defensive driving. Whilst quicker across a lap, the Bentley driver could do nothing about the Singha Motorsports Ferrari, Van Dam ultimately holding the Bentley driver out to take the position and claim more valuable championship points after finishing fourth in round one.

Sadly for the #88 Craft-Bamboo team, their frustrating weekend was about to extend into the second round, with two separate tyre issues during the race, forcing the car down pit lane twice. Sadly the second failure – within sight of the flag – forced Richard Lyons to retire the car despite having been one of the fastest cars on circuit, a tough start to the season for Yu and Lyons who collected zero points for the endeavours despite being the quickest car in practice.

In the end, the Sawa-Venter combination was just too good, the promising young Australian who won two rounds of the 2015 season, crossing the line seven seconds clear of Liberati in the FFF Lamborghini, and 20 seconds up on Anthony Liu in the BBT Ferrari.

Shaun Thong put in some impressive lap times across the closing laps to claim fourth ahead of the Van Dam/Palmer battle, whilst Alex Yoong brought the second Phoenix Racing Asia Audi across the line in P7.

Reigning champion Darryl O’Young collected more valuable championship points with eighth, ahead of Franky Cheng in the Absolute Racing Audi. Former champion Mok Weng Sun came home tenth ahead of Tim Sugden in the GruppeM Racing Porsche, the Englishman admitting post-race that he’d enjoyed his experience, but that the team had suffered from a lack of race miles with the car having only arrived on Tuesday.

Kantasak Kusiri was next, the young Thai driver making it two-from-two in the GTC class for the Singha Plan-B Motorsport team, whilst opening round GTM class winners Armaan Ebrahim and Dilantha Malagamuwa sadly suffered from a technical issue late in the race, stopping on track, with some predicting a safety car intervention.

Ultimately race control elected to let the race run, allowing Absolute Racing to collect their second winners trophy of the weekend, with FFF Racing making a brilliant recovery for second. The BBT team also finished on the podium, their sixth straight podium at Korea International Circuit, the result elevating them to second in points behind the Absolute Racing pairing and in a position to attack at Buriram.

What the driver’s had to say;
Keita Sawa – 1st, Absolute Team Bentley (Bentley Continental GT3)
“We did a very good job, especially today, the team did a very good job and the car was fantastic. I just focussed on the start, but the two guys on the front row overshot turn one. So I took advantage and just pushed hard to open as big a gap as possible because I knew we had to make up a big time deficit. Even though we had 12-seconds in the end, I still didn’t think it was possible to win the race.”

Jonathan Venter – 1st, Absolute Team Bentley (Bentley Continental GT3)
“I knew I had a bit of a gap back to the Lambo, but they’d showed good pace all weekend and had qualified in front of us, so I knew they’d be quick. I just put my head down and focussed on the job at hand and didn’t look back. I can’t thank Bentley Team Absolute enough, they gave us a fantastic car the whole week, it’s been so consistent and problem free and Sawa-san drove a fantastic race to be P1 by turn one.”

Andrea Amici – 2nd, FFF Racing Team by ACM (Lamborghini Huracan GT3)
“After yesterday, today was important for us. I got a good start and was up to fourth very quickly, then I had just two cars ahead of me. At the start the Bentley was very fast, so it was important for me to have a race pace very close to him and I was able to do that. The car was very good and easy to drive, and it was difficult for us to do much better today.”

Edo Liberati – 2nd, FFF Racing Team by ACM (Lamborghini Huracan GT3)
“Today was very, very important after the disappointment yesterday. Andrea did a very good start and thanks to him we got a podium today. We were expecting to fight for the win today, but the maximum we could do against the Bentley today was P2. The team did an excellent job yesterday to repair the car, so congratulations to them and congratulations to Lamborghini.”

Anthony Liu – 3rd, BBT Racing (Ferrari 488 GT3)
“The summary of the weekend is bittersweet plus frustration..”

Davide Rizzo – 3rd, BBT Racing (Ferrari 488 GT3)
“From what I can see compared to the other cars, we are most likely missing power. The aero side is quite good, but it doesn’t compensate for what we are losing on the straight, what we are losing out of the corners, and on tracks like this you have no chance to make it. Yesterday I got caught behind an Audi for so long because I just didn’t have the speed to pass them, so it’s difficult. Today was also difficult because we got a puncture on Anthony’s stint, and that lost us valuable time, because on new tyres you can’t push immediately.”

Bhurit Bhirmbhakdi – 1st GTC, Singha Plan-B Motorsport (Ferrari 458 Challenge)
“I had a good chance to learn the track further today, and I drove faster than yesterday, so it’s proof that if you practice a lot you can get better. This is just my second race in GT Asia, so I’m just trying to learn as quickly as I can, because everything is new, but hopefully we’ll be faster this year at Buriram than we were last year.”