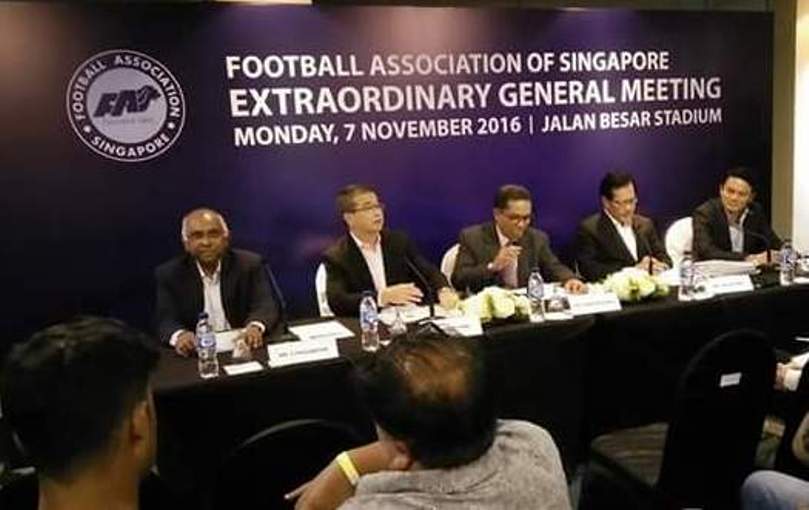 HISTORY was made by Asia’s oldest football affiliate when landmark constitutional changes were passed on Monday, which will dramatically transform the landscape of the Football Association of Singapore (FAS).

An unanimous 38-0 vote for the main document that governs Singapore football came as a stunner but it timely signaled a “new chapter and a landmark beginning” with democratic elections to follow, for the first time in close to four decades.

The FAS, founded in 1892, ranks as the oldest Asian Football Confederation (AFC) member and celebrates 125 years next year. But instead of being the revered role-model football leader, it has been muddled with recent controversy over allegations of political interferences.

The current office-bearers have had their arms locked and forced to move in the right parliamentary or democratic direction because their knuckles have been rapped by the global football body FIFA (Federation of Football Association).

FIFA has taken particular issue with article 19.3 of FAS’ constitution that was last updated in 2011. The article states that “all council members shall be appointed by the Minister for Community Development, Youth and Sports (the former name of the current Ministry of Culture, Community and Youth (MCCY)” – including the FAS president – “and shall, unless otherwise decided by the Minister, hold office for a period of two years”.

Now, after more than 40 years of government-appointed FAS committees, the 46 affiliated clubs from the S-League, National Football League (NFL) and Island-Wide League (IWL) have a fantastic chance to pick their new leaders. The unanimous views from the Jalan Besar Stadium headquarters after Monday’s Extraordinary General Meeting (EOGM) were that this would mark a “moment of truth for the grassroots to have a big say”, to who should be the new football supremo.

Mr Alfred Dodwell, the legal adviser from Islandwide League (IWL) Gymkhana FC, who has been most vocal on the constitutional amendments, said: “It was nice to be in a room filled with people who wanted to do what is best for football. We proposed and they were prepared to accept some.

“We concede some in the interest of ensuring we have a conflict free night for football. We can be proud of the 100 per cent unanimous vote for the main document that governs Singapore football. This is the start of a new chapter.”

Current FAS vice-president Lim Kia Tong, who was part of the FAS Taskforce that tirelessly worked on the proposed amendments, gave the thumbs-up, too, and hoped the overwhelming 38-0 vote would herald refreshing changes.

“We’ve moved along a very tedious journey, but the most satisfying effect of all this hard work is the unanimous vote this evening,” said Mr Lim. “It is very cogent, visible and demonstrates that the football fraternity out there have found that the ingredients of this amendment are palatable to them and that this constitution is a good one.

The experienced bespectacled lawyer is widely expected to run for the FAS Presidency, vacated by Zainudin Nordin. The current boss, who is a former Member of Parliament for Bishan-Toa Payoh Group Representation Constituency, has held his post at the helm since April 2009, and is reportedly not seeking re-election.

Mr Lim, according to FAS sources, is viewed as a “reluctant leader” as he doesn’t have the mandate of majority of the incumbents and also lacks grassroots experience. But he is the senior most FAS official and also Deputy Chairman of FIFA’s Disciplinary Committee. And on his shoulder, for better or for worse, rests the future of the denizens holding out at the Jalan Besar Stadium headquarters.

It is learnt Mr Lim has been well-informed that the heartlander clubs are not in favour of the incumbents and he risks a “tsunami-like freak FAS election result” if he fields majority of the present office-bearers.

Sources close to Mr Lim say he is seriously looking for a new team of younger candidates, who can sincerely have a cordial relationship with the grassroots, something the current bureaucrats were widely criticised, especially for not even turning up for a single S-League professional match!

Singapore Recreation Club (SRC) General Manager Shareef Jaffar, who represented the 1883-founded Padang club, left the hour-long meeting with a big smile on his face: “It was very heartwarming to see the football fraternity coming together as one family, putting aside their differences and working together hand in hand to bring Singapore football to the world stage.”

NFL Siglap Football Club Team Manager Alim Omar hailed it as a “clear step in the right direction”. He added: “The clubs voted for the constitution and we want the election  to be done soon. Voting against it will not make football in Singapore any good. In my view, this is a moment of truth for the grassroots to have a big say to who should be the new football supremo.”

Five-times S-League champion Tampines Rovers General Manager Desmund Khusnin candidly said that “the changes were expected to be accepted” but he expressed disappointment that the constitutional changes “should have been done very much earlier” by the incumbents.

Mr Ronnie Lee from IWL club GFA Victoria says the “signals are very clear that the clubs are ready to democratically cast their votes for the first time in over 40 years”. He added: “I was surprised there were no clubs proposing for any further amendments as compared to over 40 proposed changes in the September annual general meeting. It distinctly shows that the clubs are ready to go on to contest in the elections very soon.”

November 7 will now go down the history books as a special footballing day, where free and fair elections will now democratically rule Singapore football. Indeed, it’s high time for Asia’s oldest affiliate to show that they are clearing their muddled-up backyard, in the correct spirit of goodwill and fair-play sportsmanship.

Whoever comes to the fore, definitely without serious political connections, will have a very tall order at hand to lift the declining fortunes of the No 1 sport, as Singapore is rated the record-lowest at No 171 in the FIFA ranking.

More importantly, to ensure that there’s thorough efficiency and transparency in football administration at Jalan Besar Stadium, something which has been regularly frowned upon by the critics.

Let’s now give a standing ovation to the changed landscape in Singapore football and hopefully, it will herald in a new lifeline and refreshing changes that the heartlander clubs really want to see – strictly going by the book, autonomously and constitutionally, by FIFA’s strict global standards.