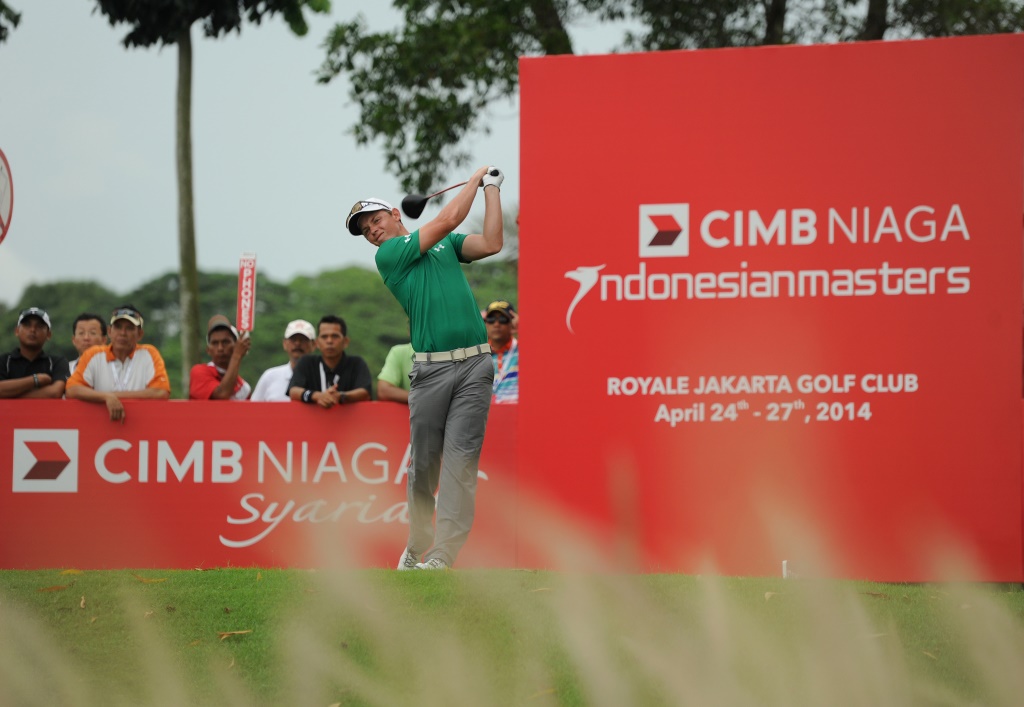 Australian rookie Cameron Smith will face one of his career’s biggest tests after he posted a five-under-par 67 to take the third round lead at the US$750,000 CIMB Niaga Indonesian Masters on Saturday.

Smith, who has enjoyed a distinguished amateur career, compiled a three-day total of 14-under-par 202 to head into the final round in pole position in what is only his second professional event on the Asian Tour.

India’s Anirban Lahiri displayed the qualities that made him a EurAsia Cup hero when he fired a flawless 64 to trail Smith by one in second place while compatriot Rashid Khan was equally impressive as he also matched Lahiri’s effort with a 64 to take third place.

Smith made a bold decision to move into the play-for-pay ranks after an illustrious amateur career where he won a host of events including the 2013 Australian Amateur, Australian Junior Championship and Australian Stroke Play Championship in 2011.

Having earned his Asian Tour card when he finished tied-18th at Qualifying School earlier this year, the 20-year-old missed the cut in his first professional event in the Philippines in March.

However it has been a refreshing change of fortune for the Australian as he now finds himself atop the leaderboard for the first time after rounds of 68, 67 and 67 at the CIMB Niaga Indonesian Masters.

“I started off a bit slow. The eagle on the ninth kept the birdies coming. That was the highlight of the day as I holed a pretty long putt. It has been great three rounds so far. I’ll keep to the same game plan tomorrow which is to hit as many fairways and greens as I can and continue to putt well,” added Smith.

Lahiri, a three-time Asian Tour winner, could be on the verge of landing his first title outside of India after he posted the day’s lowest score together with Khan.

“It was a relief for me to actually play the kind of round that I did back home at the Delhi Golf Club. I’ve been playing very well and it’s nice to finally see it reflecting on the leaderboard,” said Lahiri.

Lahiri, who played a key role in Team Asia’s epic 10-10 draw with Team Europe at the EurAsia Cup last month, continued to impress when he got off the starting tee quickly with birdies on holes two, five, six and nine for an outward 32.

He further asserted himself with three successive birdies starting from the par-four 10th and would complete a sensational round by closing with another birdie on 18.

“I’m just glad I have put myself in a good position going into the final round as I am obviously looking to break into the top 100 on the world rankings so that I can get into the bigger events,” said Lahiri, who is currently ranked 102nd on the Official World Golf Ranking.

“I’m hitting the ball good. I don’t have to do anything different tomorrow. If I can just keep hitting the fairways and greens tomorrow like how I did today, that would help. I am confident with how I am playing right now,” added Lahiri.

Still riding high on confidence following his career breakthrough at the Asian Tour season-opening event in India, Khan was equally impressive as he marked his card with seven birdies, an eagle and one bogey.

“This is my third tournament on the Asian Tour and it really gives you a good boost when you’ve won a tournament. Everything looks easy after that win but you still have to score well to win a tournament,” said Khan.

After two rounds of matching 70s, Khan found the greens too quick for his liking and returned to the putting green for practice which eventually paid off.

“I didn’t really expect to post such a good score today as I’ve been struggling with the fast greens here.  But I managed to hole putts today and got comfortable with the greens as I’ve been practising on the putting green,” said Khan.

Tournament marquee names Louis Oosthuizen of South Africa and France’s Victor Dubuisson were forced to withdraw from the CIMB Niaga Indonesian Masters because of a back and shoulder injury respectively.

“As much as I would love to, I cannot carry on playing at the CIMB Niaga Indonesian Masters as I’ve hurt my back and I’m unable to swing my club. The hospitality and the atmosphere at the event has been fantastic.  I’m very disappointed and hope to be back again next year. I want to thank everyone concerned about my injury and I hope to recover soon,” said Oosthuizen, the 2010 Open Championship winner.

Leading scores after round 3 of the CIMB NIAGA Indonesian Masters being played at the par 72, 7340 Yards Royale Jakarta GC course (a- denotes amateur):