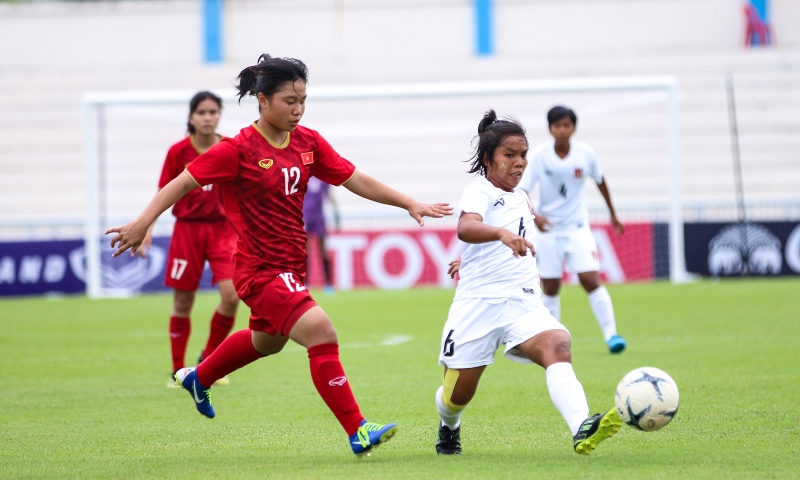 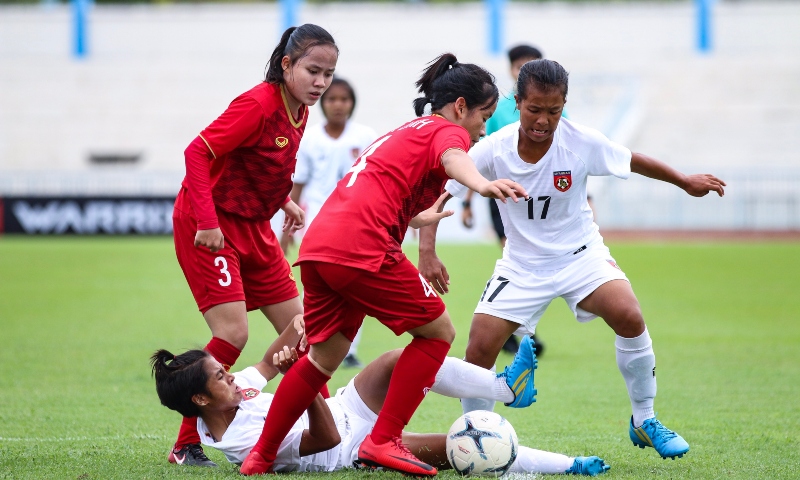 Vietnam made it three wins from three matches in Group A when they beat Myanmar 2-1 to confirm their place in the semi-finals of the AFF Under-16 Girls Championship 2019.

But before they were able to ensure their semis spot, they had to endure some anxious moments in their final tie in the group when Myanmar took the early lead before the Vietnam girls fought back to score two goals after the break.

And who else to find the back of the net for Vietnam other than their top striker Tran Nhat Lan, whose two goals in the afternoon pushed her to the pinnacle of the top goal scorers’ list.

“I’m glad to have scored today. It was a crucial win,” said Nhat Lan afterwards. “Now we are in the semifinals.”

Following from their loss to the Philippines two days ago, there was little choice for Myanmar but to go all out for their clash against Vietnam.

And for a while, Myanmar seemed to have their desire locked down as they defended in numbers and were always looking for ways to go forward.

With Vietnam still finding their footing, it came as no surprise that it was Myanmar who went ahead in the 18th minute when Zin Moe Pyae fired in a freekick to beat Vietnam keeper Le Thi Tra My, who up till now had not conceded a single goal.

Vietnam finished the half with an attempt from Ngo Thi Thanh Thuc that was parried out of play by Myanmar custodian May Oo Khin.

However, the second half would be different as the pep talk at the break saw Vietnam getting into the Myanmar backline more easily.

And before long, they got the equaliser they were looking for in the 53rd minute with Nhat Lan stabbing home after some poor clearance from the Myanmar backline.

Nhat Lan then gave Vietnam the winner on 68 minute when she converted a penalty after Bui Thi Thuong was felled inside the box.