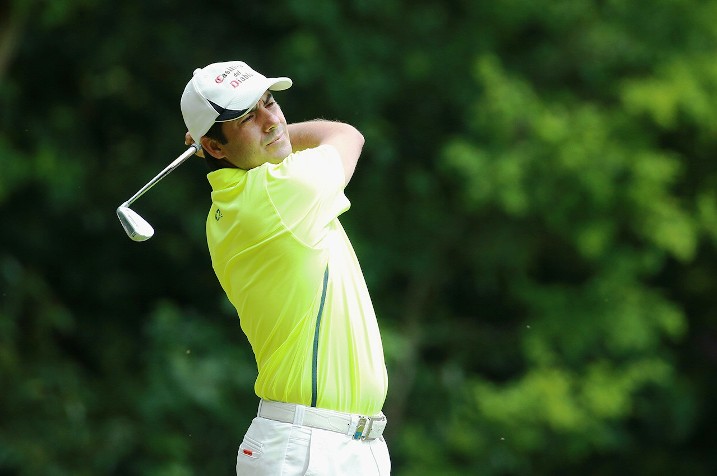 Felipe Aguilar from Chile stayed in front after the third round of the Volvo China Open today but was joined at the top of the leaderboard by Lucas Bjerregaard from Denmark.

They lead the event, jointly sanctioned by OneAsia and the European Tour, on 16 under par.

Aguilar, who started the day with a one shot lead, came in with a 67, while Bjerregaard recorded a 65 on a remarkable day of low scoring at Topwin Golf and Country Club.

Belgium’s Nicolas Colsaerts matched the low round of the day with a 65 of his own to sit at 14 under alongside home favourite Li Haotong, Englishman Tyrrell Hatton and Swede Alex Noren.

Aguilar has two European Tour titles to his name but a victory here would be a brilliant return to form after making just one of his previous seven cuts.

The 41-year-old birdied the first and fourth with some brilliant approach play, adding a 30-foot putt at the third and another gain on the eighth and 11th. He dropped his only shot of the day on 13 but later recovered with birdie on 18.

“My putting is my weakest part of my golf game,” said the Chilean. “It’s been very poor for the last six months and I switched putter this week and that was thanks to Fabrizio Zanotti.

“I went in his bag and took his putter. He was kind enough to let me use it and I think that’s been the biggest difference, that I’ve made some putts that I really needed to make.”

A win for Bjerregaard would be his first on The European Tour after he finished second at last season’s UBS Hong Kong Open in a run of five top 10s in eight events.

Bjerregaard began his round in fine style, holing his approach at the par-four third for eagle, and then he added another birdie at the eighth but he trailed overnight leader Aguilar by three at the turn.

He birdied the 11th and 12th and missed a chance to join the lead at the 15th, but made up for it when he put his approach on the next to three feet. An impressive par save followed on the 17th before a birdie on the last set the clubhouse target.

Colsaerts, winner of this event in 2011 at Luxehills International Country Club, was blemish-free and shot up the leaderboard with four birdies in five holes after the turn, while Li delighted the home crowd with four in a row from the fifth in his 66.

Hatton birdied three of his last four and had an eagle on the eighth in a 67, with Noren overcoming a double-bogey on the fifth by also eagling the eighth as he went round in 68.