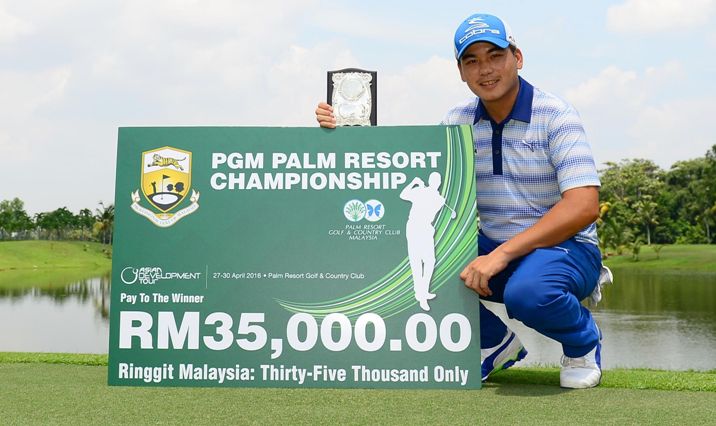 Sutijet Kooratanapisan of Thailand fired a stunning 12-under-par 60 to defeat home favourite Danny Chia by one shot and win the weather-shortened Palm Resort Championship on Saturday.

The 28-year-old Sutijet was on track to a magical 59 but missed a 10-foot birdie on the last to settle for a winning total of 23-under-par 193 in the event which was reduced to 54 holes due to inclement weather.

His round of 60 would have been the 18-hole record on the Asian Development Tour (ADT) if not for the preferred lies ruling.

Chia posted a 64 to finish in second place while 17-year-old Suradit Yongcharoenchai of Thailand settled for third place on 199 at the RM200,000 (approximately US$46,600) event played at the Palm Resort Golf and Country Club.

Sutijet, who was three-shots off the pace at the start of the day, was delighted to win his first ADT title after shooting 10 birdies and holing a 20-foot eagle putt from the fringe of the 16th green.

“I didn’t think about winning even after they reduced the tournament to 54 holes. I stayed focus and played one day, one hole at a time. I played with two other Thai players so that didn’t give me any pressure!” said Sutijet.

“I’ve been waiting for this win since I started playing on the ADT last year. I saw so many Thai players win and now I can finally join them,” he laughed.

He admits that shooting a rare 59 had flashed through his mind when he birdied the 17th hole and was disappointed to miss a makeable birdie on the last.

“I played so well and I had a chance to shoot a 59. I was so sad that I missed the birdie on 18 but luckily I won the tournament!” said Sutijet, who won US$8,944 and earned six Official World Golf Ranking points.

Chia, aiming for a fourth ADT title, was gracious in defeat as he settled for second best after shooting seven birdies and one eagle against one bogey.

“I lost to a better player. Hats off to him for shooting a great score. I didn’t play poorly at all but I lost to someone who enjoyed a great scoring day. On the positive side, I earned some world ranking points which is very important at this stage if I want to play in the Olympics,” said Chia.

Like all other ADT events, the PGM Palm Resort Championship will offer OWGR points, which will be key for players vying to qualify for the Olympic Games in Rio de Janeiro this August.