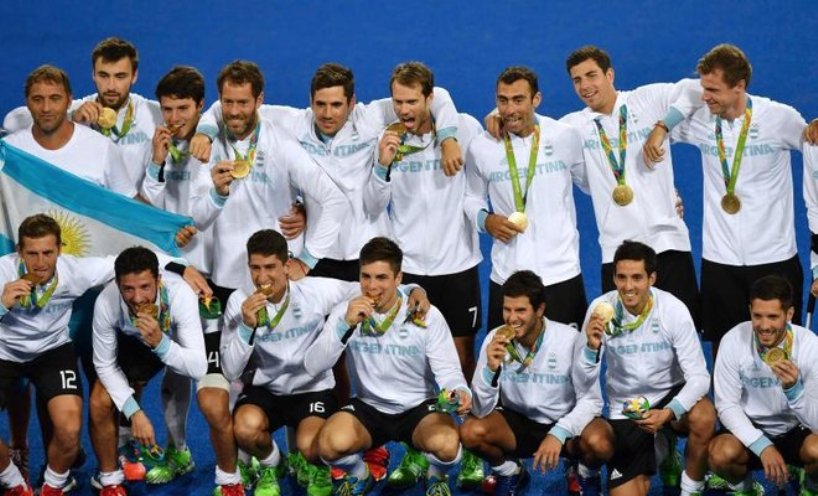 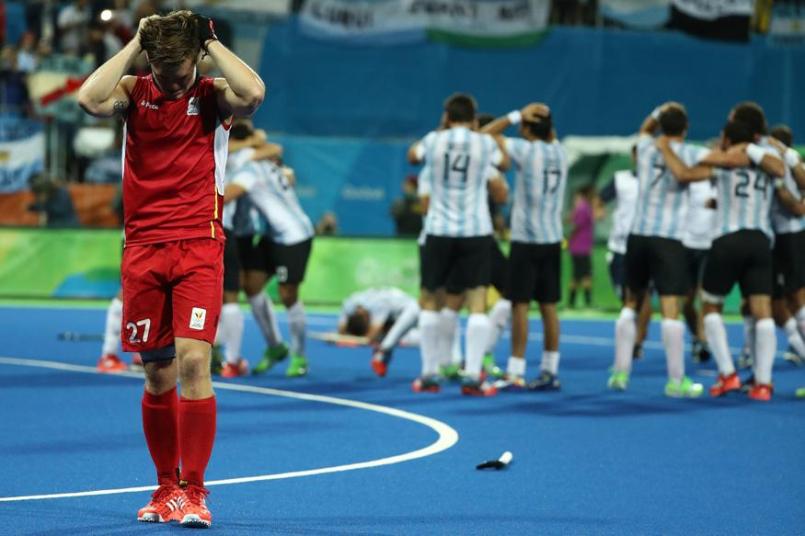 Argentina have won the men’s hockey gold medal at the Rio 2016 Olympic Games thanks to a sensational 4-2 victory over Belgium in front of a sell-out crowd on Thursday. It was also a good day for Germany, who took the bronze medal with a shoot-out victory over the Netherlands.
Over 8000 passionate fans packed into the Deodoro Hockey Centre to create an electric atmosphere and were treated to a fantastic, action-packed contest, with Argentina’s Los Leones (FIH Hero World Ranking: 7) emerging triumphant over Belgium’s Red Lions (WR: 6) and sealing their place in the history books thanks to goals from team captain Pedro Ibarra, Ignacio Ortiz, Gonzalo Peillat and Agustin Mazzilli.
Not only is it Argentina’s first ever Olympic gold medal in hockey, they are also the first Pan American hockey team, either men or women, to win an Olympic title at what is, rather fittingly, the first Olympic Games to be held in South America.
It was also another remarkable chapter in the career of Head Coach Carlos Retegui, who can now add an Olympic title to a staggering list of achievements. Retegui, known affectionately as ‘Chapa’, guided Argentina’s women to World Cup glory in 2010 and Olympic silver in 2012, before completing a stunning double by coaching both Las Leonas and Los Leones to bronze medals at the Hockey World Cup in 2014.
Cheered on by a vociferous capacity crowd containing large numbers of both Argentine and Belgian fans, the two teams produced an incredible spectacle of attacking hockey. Belgium needed just three minutes to open the scoring when Tanguy Cosyns deflected home before Argentina captain Pedro Ibarra levelled matters with a well-executed penalty corner routine in the 12th minute.
Los Leones scored either side of the quarter-time break, with Ignacio Ortiz netting a field goal ahead of a trademark penalty corner from Gonzalo Peillat, who finished the competition as top scorer with a staggering 11 goal haul from eight matches.
Belgium’s Gauthier Boccard scored a sublime individual goal at the end of the third quarter to make the score 3-2 with 15 minutes remaining, setting up a grandstand finish to the contest. Despite the Belgians applying intense pressure in search of an equalizer, the hugely impressive Argentina backline held firm before eventually settling the contest in the final minute.
Agustin Mazzilli was the scorer, rolling the ball into an empty net after intercepting a loose pass from a Belgian team that had replaced goalkeeper Vincent Vanasch with an outfield player. The strike sparked wild celebrations from the thousands of cheering Argentine fans in the stands, who knew that they had been lucky enough to witness a moment of true sporting history.
Although it was ultimately a night of disappointment for Belgium, the Red Lions were simply superb throughout the competition and will leave Rio as heroes, knowing that their Olympic silver medal is the greatest achievement in the history of Belgian hockey.
In the bronze medal match, the Netherlands (WR: 2) took a 1-0 lead five minutes after half time thanks to a moment of brilliance from teenager Jorrit Croon, who accelerated around the back of the Germany (WR: 3) defence before showing composure beyond his years to slide the ball between the legs of onrushing goalkeeper Nico Jacobi.
The youngster – who celebrated his 18th birthday in Rio – has been a sensation at these Olympics and looks to have an enormous future ahead of him.
The Dutch lead lasted just seven minutes, with defensive rock Martin Häner creating space for himself before firing past Netherlands shot-stopper Jaap Stockmann only for Mats Grambusch to get the final touch on the goal-line in what proved to be the last goal of the game.
In the shoot-out, the Netherlands found themselves playing catch-up almost immediately when Billy Bakker failed to convert, and it was an advantage that they would keep throughout the contest as Tobias Hauke, Mats Grambusch, Timm Herzbruch and Linus Butt converted their opportunities to put Germany into a 4-3 lead going into the final round.
The Netherlands needed to convert their final attempt to remain alive, but goalkeeper Nico Jacobi saved from Sander de Wijn to give Beijing 2008 and London 2012 gold medallists Germany a bronze medal in Rio.
Speaking after the match, Germany Head Coach Valentin Altenburg said: “Although right now I feel like it was a very, very successful tournament, it is actually still very, very sad that we lost the Semi-Final because it was the only loss we had in the 20 games before the Olympics and here. The journey has been great but there is a little sadness to it.”
The Olympic hockey action concludes on Friday 19th August with the women’s medal matches. Germany and New Zealand do battle for bronze at 12:00 Brasilia Time (GMT / UTC -3), before the gold medal match between the Netherlands and Great Britain gets underway at 17:00.
The Netherlands are on the verge of history-making third successive women’s Olympic hockey gold medal, although the top ranked team in world hockey face a Great Britain team at the peak of their powers and in the form of their lives. It promises to be a fascinating encounter.
Complete information about the hockey competitions at the Rio 2016 Olympic Games can be found on the official website: rio2016.com/en/hockey
The Olympic hockey events are taking place from 6-19 August at Rio’s purpose-built Deodoro Olympic Park, and will feature the 12 men’s and 12 women’s international teams that qualified through the Hockey World League and Continental Championships.
Tickets for women’s final day are still available and can be purchased here
Rio 2016 Olympic Games Hockey (men) – Day 13
Results
Bronze Medal Match
Netherlands 1, Germany 1 (3-4 SO).
Gold Medal Match
Belgium 2, Argentina 4
Final standings
Gold: Argentina
Silver: Belgium
Bronze: Germany
4: The Netherlands
5: Spain
6: Australia
7: New Zealand
8: India
9: Great Britain
10: Ireland
11: Canada
12: Brazil