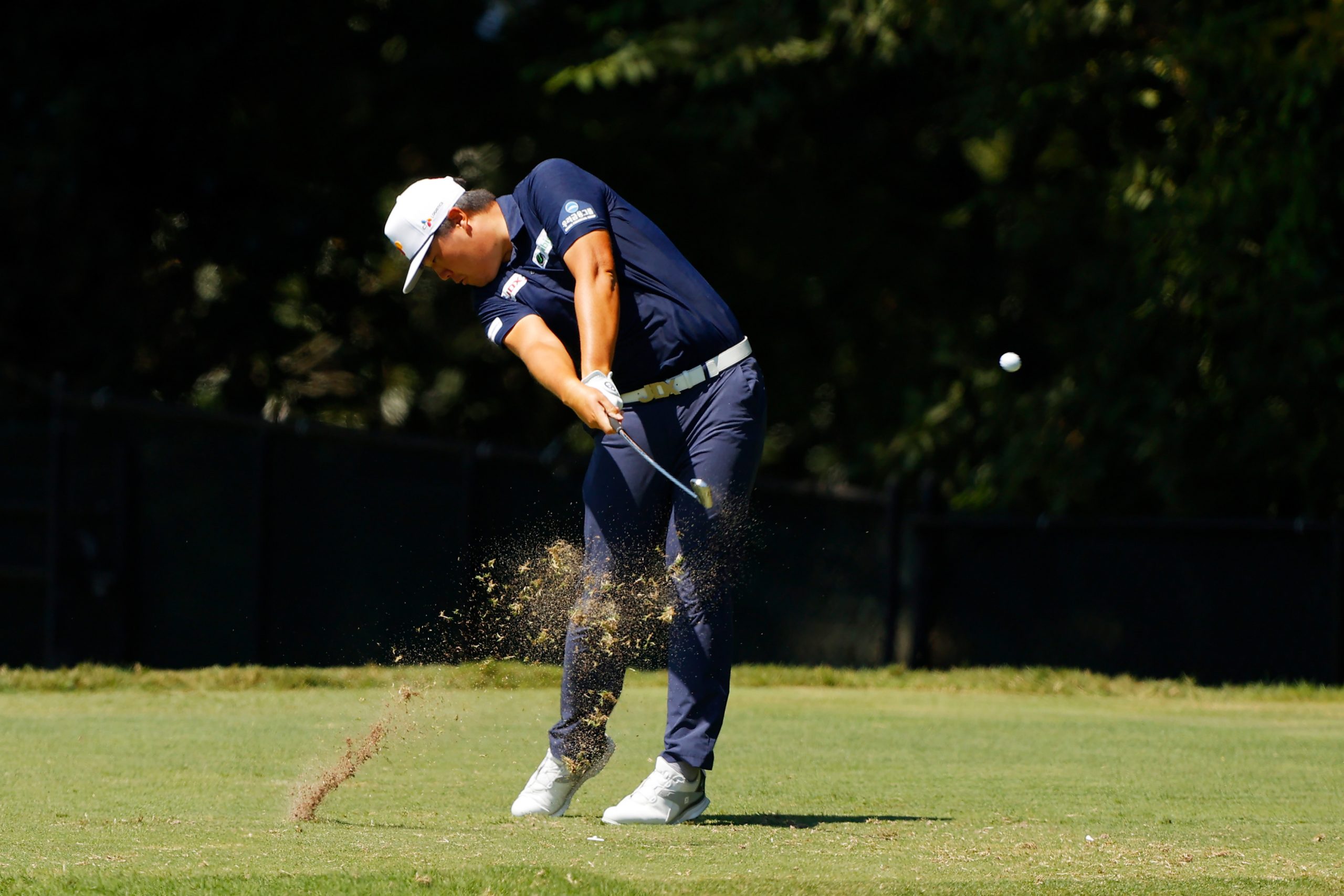 Korean rising star Sungjae Im survived a marathon Friday by playing 28 holes to put himself in prime position for a dream victory in his Masters Tournament debut.

The 22-year-old Im, the 2019 PGA TOUR Rookie of the Year, returned to Augusta National early in the day to complete 10 holes of his first round in 6-under 66 before heading back out to shoot a second round 70 for an 8-under 136 total. He is one shot back of clubhouse co-leaders Dustin Johnson, Abraham Ancer, Justin Thomas and Cameron Smith.

Japanese ace Hideki Matsuyama also stood at 8-under through 15 holes when the second round was suspended due to darkness while another Masters debutant, Chinese Taipei’s C.T. Pan was a shot back on 7-under in a share of ninth place after brilliantly negotiating 15 holes of his second round in 5-under, highlighted by an eagle and three birdies. Im, Matsuyama and Pan are bidding to deliver Asia’s first victory at the Masters where Korea’s K.J. Choi holds the best result by an Asian with a third place at the 2004 edition.

The region’s other flagbearers continued their impressive run at the fabled tournament, which was hit by bad weather on Thursday. Thailand’s Jazz Janewattananond, playing in his first Masters, stands at 4-under through 15 holes of his second round while Shugo Imahira of Japan carded a 70 to lie in a share of 34th place on 2-under.

Defending champion Tiger Woods stands at 4-under through 10 holes of his second round, lurking ominously as he seeks a 16th major victory and record-breaking 83rd PGA TOUR title.

The highly rated Im, who earned his first PGA TOUR title at The Honda Classic in March, converted a 10-foot birdie putt on the eighth hole upon the resumption of his first round before adding four more birdies against a lone bogey to come in 6-under. He fired six birdies against four bogeys during his second round of 70 which featured a chip-in birdie on the 15th hole.

“Played 28 holes today … so I have to be honest that I am a bit tired now and I want to rest up and get ready for the weekend. I have played the other majors previously and it was valuable experience and I feel like I’m prepared this week,” said Im, whose best major finish from six appearances was a 22nd place finish in the U.S. Open in September.

He has felt right at home at Augusta National since arriving for the rescheduled Masters, which is traditionally held in April but was moved to this week due to the coronavirus pandemic. “I played 18 holes on Monday and I did feel the course suited my style of game and I approached the tournament with confidence,” said Im.

In his ninth Masters appearance, Matsuyama, 28, put himself in position for a title tilt with birdies on Hole Nos. 2, 10, 13 and 15 before the siren blew at 5.30pm to signal the suspension of play. The five-time PGA TOUR winner has finished top-10 twice at Augusta National in 2015 and 2016.

“I’m happy with the way I played today … I played better than I did yesterday so no complaints,” said Matsuyama. “There’s nothing in specific, just overall I’m playing good. The course played the same as yesterday and all I can do is go out and play my best.”

A day after turning 29 years old, Pan continued to shine. He opened his second round with five consecutive pars before striking a mighty five wood approach into the par 5, 15 hole to three feet for an easy eagle conversion. He birdied the next hole with an masterful tee shot to six feet, and picked up further gains on the first and second holes before the siren blew when he was on the eighth fairway.

“Honestly I didn’t feel comfortable until I made eagle. I started on 10 which is a tough tee shot and I didn’t hit a great and had 210 yards in. I was able to convert a 15 footer for par. That was a big putt as mentally it gave me a lot of confidence,” said Pan.

“I felt like I struggled at the beginning of the round, trying to give myself birdie chances but it didn’t work out the way I wanted to until the 15th hole when I hit a great second shot for eagle. That was definitely a booster there. I love the way I scored these couple of days. Last night, I got back to my  stats and saw I hit a lot of greens and gave myself  lot of birdie chances from 20, 15 feet. I felt my game is good. Just keep working on the things I’m working on which has helped me get here.”