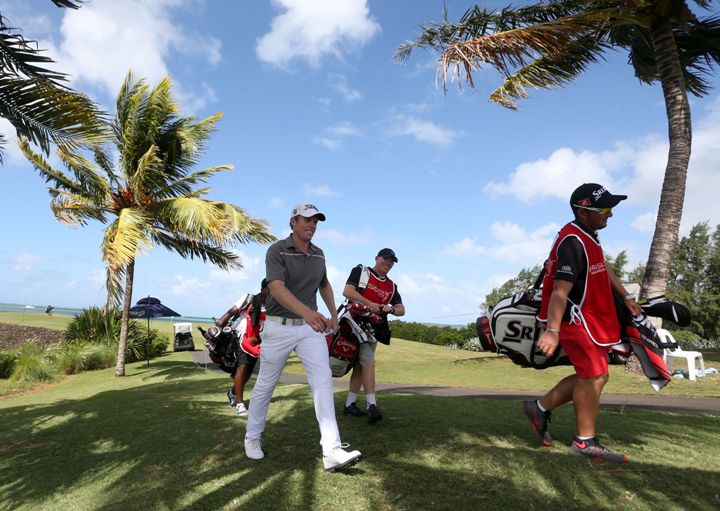 Australian Andrew Dodt stood tall amidst the windy conditions to sign for an opening six-under-par 66 and lead by two shots at the AfrAsia Bank Mauritius Open on Thursday.

Dodt fired one eagle and six birdies against two bogeys to take his place atop the leaderboard while India’s Rashid Khan and Siddikur Rahman of Bangladesh shared second place at the €1 million (approximately US$1.09 million) event.

In-form Jeunghun Wang of Korea signed for a 69 to take fourth place with Estanislao Goya of Argentina while Thailand’s Natipong Srithong, South African Jbe Kruger and Chiragh Kumar of India settled one shot back in sixth at the Four Seasons Golf Club Mauritius at Anahita.

Defending champion George Coetzee of South Africa and Thailand’s Thitiphun Chuayprakong, who secured his maiden win earlier in February, were amongst those bunched in ninth place following matching 71s at the AfrAsia Bank Mauritius Open, which is the first tri-sanctioned event by the Asian, European and Sunshine Tours.

“It’s not easy out there. If you are off by just a little bit, it gets magnified by the wind. I played really solid. I didn’t make many mistakes and the momentum of the round just kept flowing,” said Dodt, a two-time winner on the Asian Tour.

After opening with two consecutive birdies from the 10th, Dodt dropped a shot on 14 but bounced back strongly with a birdie on the next and an eagle on the 18 to turn in four-under. He fell back with another bogey on the second but added three birdies on his way home.

“Knocking those six-footers in for par just keeps my momentum going. I didn’t hit a good shot into the 10th, but managed to chip in for birdie. Then on 11, I went in the fairway bunker and hit a seven iron out to about two feet. I hit an eight iron from 96 metres at one stage. I haven’t done that before.

“This course can bite you at any stage, so there’s a long way to go and a lot of golf to be played. You just have to stay patient and limit the mistakes,” added the 30-year-old Australian.

Khan surprised even himself after returning with a solid round thanks to his solid drive and hot putter.

“It was really windy when I played my practice rounds earlier this week and I wasn’t expecting to shoot a good round when I started out today. I played really well. I started well and that gave me some confidence,” said the 25-year-old, who marked his card with seven birdies against three bogeys.

“I hit the ball really good. I was able to find the greens and I holed some putts today. I nailed a 50-footer downhill left to right for birdie on the eighth. That was probably the highlight for me today. It’s going to be the same game plan for me tomorrow. Nothing changes,” added Khan.

Siddikur credited his brilliant short game for a commendable round where he traded five birdies against a lone bogey.

“My hitting was good and my short game was solid. I chipped in for birdies on the second and 15. I made some really good putts as well. I really enjoyed my round. It was windy but I enjoyed the challenge out there.

“I love playing on challenging courses because it sets me thinking. I expected the wind and I am glad I tackled it well! I am looking forward to the next few days,” said the 31-year-old Bangladeshi, who is chasing for a third Asian Tour victory.

Fresh from his breakthrough win in Europe last week, Wang fired three straight birdies against one bogey for an outward 34 and reeled in eight straight pars before gaining another birdie on 18.

“It was really windy out there. It wasn’t easy so I am happy to return with a 69. I tried my best out there and I hope to remain consistent for the next three rounds so I can try to push for another win again. I stayed patient out there.

“Winning in Morocco last week really gave me a lot of confidence in my game. I received a lot of calls and messages from family and friends, congratulating me on my win. The last few days have been really enjoyable. It will be nice to give myself a chance to try and win this week,” said the 20-year-old Korean.