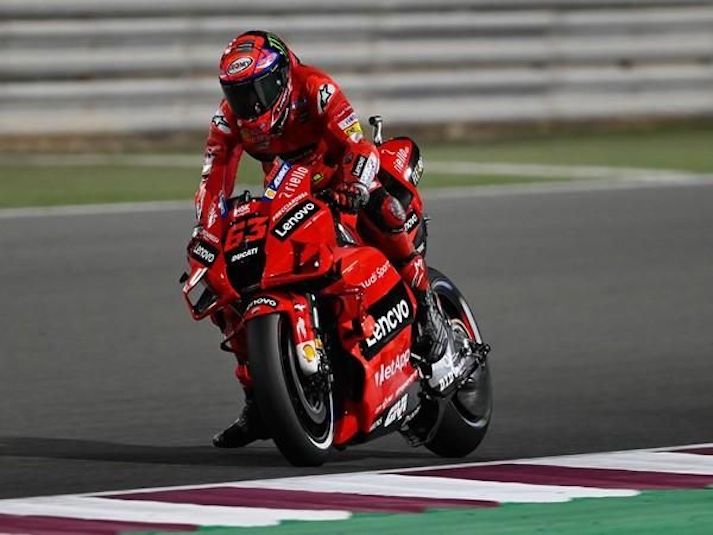 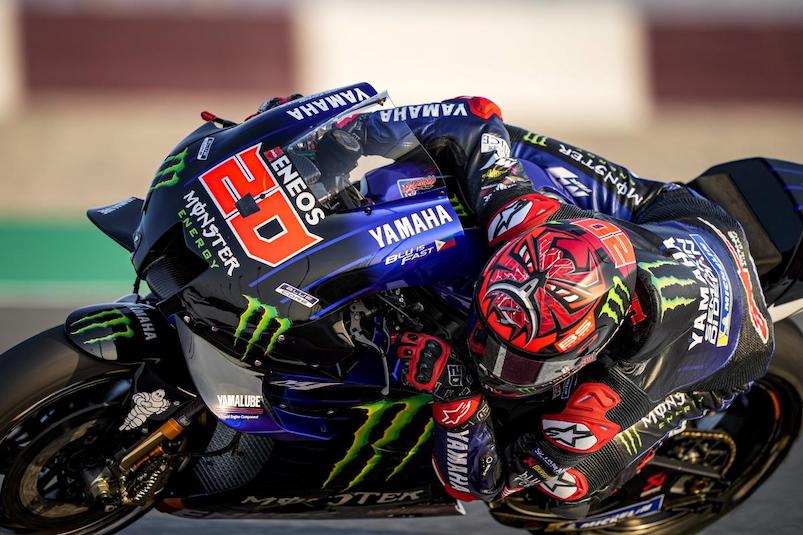 The top eight all went under the old lap record in a scintillating Q2; factory Yamaha make-up the front row, Rossi picks up P4

Before the hell-raising Q2 session kicked off, reigning World Champion Joan Mir (Team Suzuki Ecstar) found himself taking part in qualifying about 20 minutes before he would have planned, the number 36 having to compete in Q1 at the season opener. And it wasn’t a walk in the park for Mir – far from it. Two rookies in the form of Jorge Martin (Pramac Racing) and Enea Bastianini (Esponsorama Racing) both took turns leading the session, with Mir returning to P1 by just 0.005s with his best lap of the weekend.

After setting two red sectors, Martin then crashed unhurt on his last lap with Bastianini unable to improve. Out of nowhere, Takaaki Nakagami (LCR Honda Idemitsu) was then the man to keep our eyes on and sure enough, the Japanese star snatched P1 in Q1 on his final flyer to demote Bastianini out of a Q2 promotion place. That 0.005s deficit to Mir proved to be the difference. Mir edged through to Q2 by the skin of his teeth, with Bastianini and Martin well and truly announcing themselves on the premier class scene in a wonderful first 15 minutes of qualifying.

So, Nakagami and Mir joined the fastest 10 riders from Free Practice for Saturday’s main course: MotoGP™ Qualifying 2. And in said session, it took Bagnaia one lap to break the all-time lap record, a 1:53.273 was set by the Italian which set us up for a phenomenal first qualifying session of the season. Despite the P1 time being an all-time lap record, the timing screens were lit up with red sector times.

Bagnaia didn’t improve on his next lap but teammate Miller did, the Aussie went P1 but Quartararo was an astonishing four-tenths under at Sector 3. The straight-line speed in Sector 4 saw the Frenchman lose some time but Quartararo still shot to P1 with a 1:53.038 – another all-time lap record.

After the first couple of flying laps, it was a Yamaha and Ducati fest at the top, with Aleix Espargaro placing his Aprilia Racing Team Gresini machine in P6 ahead of Johann Zarco (Pramac Racing). Ahead of those two sat Quartararo, Miller, Viñales, Bagnaia and Franco Morbidelli (Petronas Yamaha SRT). A monstrous opening set of laps from the leaders.

New rubber was then fitted and we got ourselves strapped in for the second set of Q2 barnstorming laps. Viñales was the leader on the road and the first to show us what he had left in his locker, the Spaniard made it a factory Yamaha 1-2.

Attention turned to Bagnaia who had Valentino Rossi (Petronas Yamaha SRT) in tow, and the Ducati rider unleashed a mindblowing lap to return to P1 by 0.266s. Rossi’s effort put him P3 as The Doctor demoted Viñales off the front row, but Top Gun then returned the favour to his old teammate on his final lap to displace Rossi to P4.

The front row then went unchallenged for the remaining seconds. Bagnaia said on Friday, “we will beat the record in Q2”, and Pecco stuck to his word. What a way for the Italian to claim his first premier class pole position, the fastest-ever two-wheel lap of the Losail International Circuit.

Unreal scenes. Quartararo and Viñales were pleased with front row starts and will be hoping to beat Bagnaia’s missile into Turn 1, as The Doctor joins two of his three Yamaha counterparts inside the top four. A 1:53.114 is by far the fastest Rossi has lapped Losail, an old dog can learn new tricks after all.

Joining the 42-year-old on the second row is Miller and Zarco. The two Bologna bullets will have been hoping for more in Q2 as the Australian couldn’t improve on his first run, but the middle of the second row is far from a disaster. For Zarco, the new MotoGP™ top speed record holder at 362.4km/h, his last flying lap was his best and it ensured him of a P6 starting slot, it was a time that knocked Morbidelli onto the third row.

The Italian spearheads Row 3 and he’s joined by Aleix Espargaro. Eighth place for the Spaniard and Aprilia is a job well done and when you put things into perspective, it’s even more impressive: the top eight were all under Marc Marquez’s old lap record – that includes the elder Espargaro. Something to be extremely proud of and something to really build on for the Noale camp.

Alex Rins (Team Suzuki Ecstar) is the final member on Row 3 in P9, with Mir being forced to settle for P10 – 0.910s back from pole position. Work to do on a Sunday for both Suzukis again, but if there’s one thing we learned in 2020, never discount the GSX-RR duo in race trim. Nakagami is the leading Honda ahead of the opening race of 2021, he and Pol Espargaro (Repsol Honda Team) will fire off the line in P11 and P12.

We were expecting fireworks, but wow. That was something. A new all-time Losail lap record and top speed record within an hour. It’s safe to say MotoGP™ is off to an astonishing start in the desert, as attentions now turn to race day. Bagnaia has done the hard work up until now, but can he help Ducati keep up their formidable Qatar record under the lights in 24 hours time? There’s a whole host of riders lining up behind him who are more than capable of winning the Qatar GP, it’s simply going to be an unmissable event.