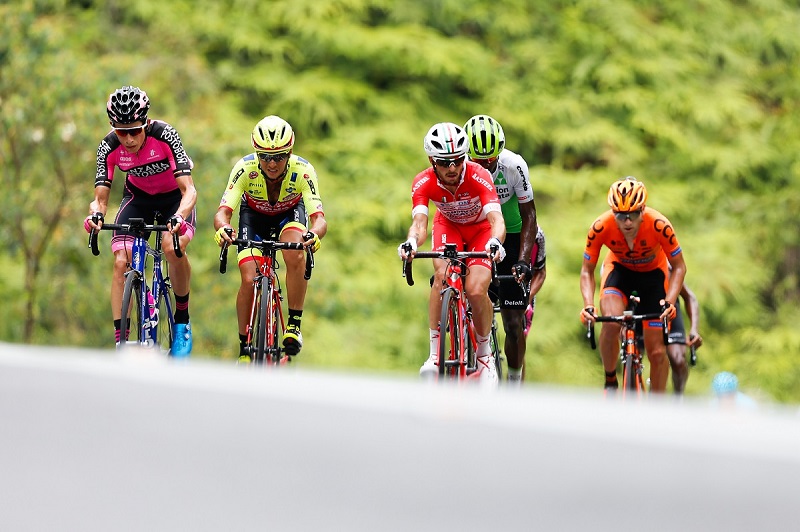 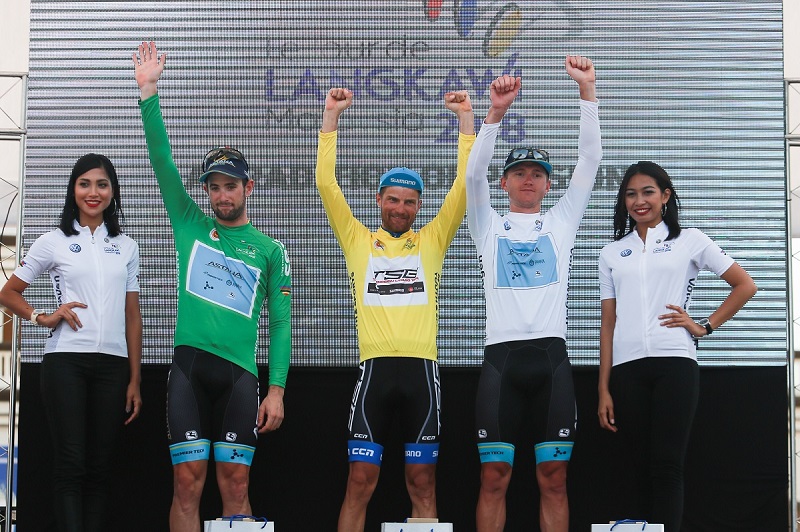 Italy’s Belletti bagged the victory after winning a 10-man sprint from a successful 10-man breakaway pack ahead of a peloton that was split into several groups.

The experienced sprinter arrived at the finish line of the lengthy stage that included a whopping six categorised climbs and three intermediate sprints in 5 hours 8 minutes and 23 seconds, ahead of Wilier Triestina-Selle Italia’s Eugert Zhupa, who emerged the first Albanian to step on the LTdL podium, and Astana’s Ruslan Tleubayev in third.

Yellow jersey holder Artem Ovechkin of the Terengganu Cycling Team (TSG) arrived in the second group, one minute and 28 seconds behind the lead group, which was enough to sustain the Russian’s overall lead although Lukasz Owsian of CCC Sprandi Polkowice has now replaced St George Continental Cycling Team’s Benjamin Dyball in second spot with a 28s deficit from the Ovechkin, who ascended into the lead after winning the Cameron Highlands stage on Thursday.

Ovechkin had to work extra hard in the larger second group, with only Eritrean teammate Metkel Eyob for company, and barely managed to also sustain his polka dot jersey as the mountains classification leader with 40 points despite the gap being closed two points by Bernardo Albeiro Suaza of Manzana-Postobon as the Colombian dominated the categorised climbs of the day with compatriot Alvaro Duarte of Forca Amskins.

Italy’s Riccardo Minali of Astana maintained his lead in the points classification with 55 points despite not collecting any bonus points today, as closest rival Andrea Guardini of Bardiani-CSF was equally unaggressive today and was dropped to finish among the latter groups of the split peloton.

The only change in leadership today was in the non-jersey Malaysian riders’ classification with Team Sapura Cycling’s Muhamad Zawawi Azman, who was he only local rider to finish in the second group of 31 riders, taking a commanding lead of over 13 minutes from second placed teammate Muhammad Nur Aiman Zariff.

While early assumptions were that the stage would end in another bunch sprint despite the distance, the sprinkling of climbs saw the peloton split into several large groups.

However, Belletti made the right decision to place himself in a front group which was later further split into a group of 10 leaders as they approached Tangkak and this group managed to sustain a gap of one minute and 35 seconds over the second group to arrive at the finish line for a battle for the top 10 spots.

“Last night the team had discussed both possibilities of the stage finishing with the peloton as one and in various groups. We also studied the final kilometre of the route. So, my Androni teammates and myself were always aware of the situation throughout the stage and tried to place ourselves in the front group. Despite five Androni riders in the front, I must admit today was a really tough stage,” said Belletti.

“Today’s win is a meaningful one as my last win was more than two years ago. The victory drought had influenced my decision to join Androni this season,” added Belletti, who had not raced the whole of last season after being ill with a viral infection.

He was further affected in January when a crash in Argentina resulted in a broken rib and collarbone.

Belletti, who had previously rode for Ag2r and Colango-Inox and has one Giro d’Itlia stage win in 2010 to his credit, said he will try to bag another stage win to finish the race tomorrow.

“I hope today’s win will mark a new beginning for me this season, where I am targetting to race and win in the Giro again,” he said.

Ovechkin when met, said was supported by his teammates throughout the race but at certain moments had to take matters into his own hands in a group that contained all his closest rivals.

“As expected tofay was tough, but it was okay because I only had to watch out for my closest rivals,” he said.

Zawawi meanwhile, said he had stayed close to Colombian teammates Wilmar Perez Munoz and Victor Nino and that led to him finishing in the second group.

“I stayed close to teammates Perez Munoz, Nino and Dylan Page, who were always in the front group. But I was late to react when the 10 riders attacked near the finish, thus only sustained my place in the second group,” said the Ipoh-born, who finished 24th.

From 188 riders who registered for the start of the stage, 14 failed to finish the tough stage today, leaving 104 to start the final stage from Rembau to Kuala Lumpur tomorrow.