Home 2017 BMW racers dominate in the IRRC and the IDM 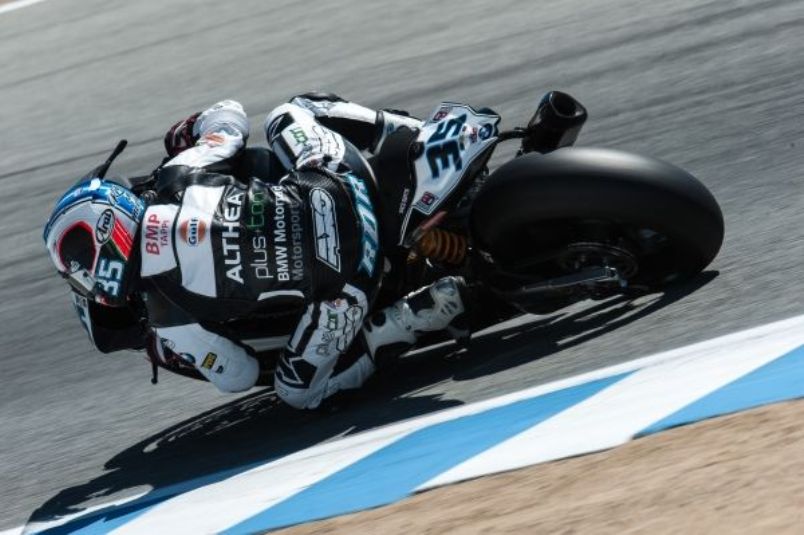 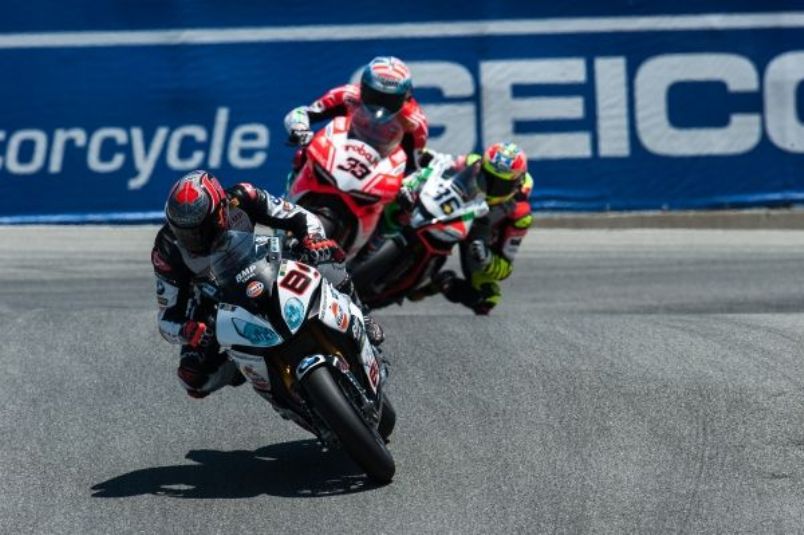 It was another fantastic weekend for the BMW Motorrad Motorsport racers in several international and national championships. They dominated the action in the International Road Racing Championship (IRRC), claiming a top-10 and a top-8 lockout in Imatra (FIN). The IDM International German Championship (IDM) held its races in Zolder (BEL), with Markus Reiterberger (GER) and Danny De Boer (NED) celebrating a double 1-2 result.

In the French Superbike Championship (FSBK), Kenny Foray (FRA) raced to his sixth win of the season in Magny-Cours (FRA), while Florian Brunet-Lugardon (FRA) won both French European Bikes Championship (FR EU) races at the same venue. The BMW riders and experts have also been in action in Laguna Seca in the USA and in Australia at the weekend.

The Althea BMW Racing Team and the specialists from Munich travelled overseas at the weekend: the eighth round of the 2017 MOTUL FIM Superbike World Championship (WorldSBK) was held at popular Laguna Seca Raceway near Monterey (USA) in California. In Saturday’s first race on the course with the famous Corkscrew corner, Jordi Torres (ESP) finished seventh on his BMW S 1000 RR. His team-mate Raffaele De Rosa (ITA) was 13th. The second race on Sunday was a difficult one for the team with both riders retiring after crashing.

Jordi Torres: “Race one didn’t go too badly. We made some more changes to the bike before the race. The bike worked better than before and I was more confident. In race two, we started well and were up there, in fourth place. Then Davies and Melandri came along and I lost a little ground. I was doing my best to defend my position and build confidence with the bike that was working better compared to Saturday, but then at turn one I went to downshift, missed the last gear and was thrown to the ground.”

Raffaele De Rosa: “We started quite far back in race one and there was contact between me and another rider at the first turn which caused me to lose ground. I tried to make up some positions and my pace wasn’t bad up until the mid-race point. From then on though, there was a drop in tyre performance and I was struggling to manage the sliding, particularly in braking. Regarding race two, there’s not much to say because I only did a few laps. Up until that point I was feeling better on the bike, which seemed more stable compared to Saturday. I crashed without warning. I’m sorry because we could have had a good race. It was a pity not to make the most of the opportunity.” 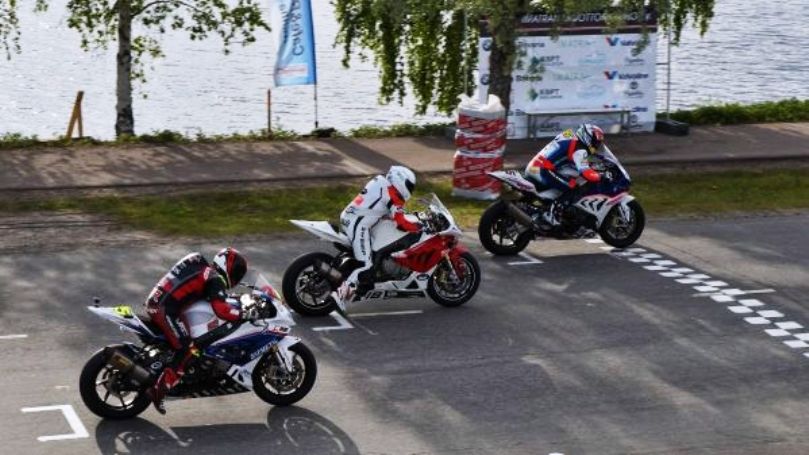 The BMW S 1000 RR racers were a force of their own at the second round of the 2017 International Road Racing Championship (IRRC) held in Imatra in Finland. In the two Superbike class races they claimed a top-10 and a top-8 lockout.

On Saturday, Rico Penzkofer (GER), team principal of Penz13.com BMW Motorrad Motorsport, celebrated his 42nd birthday – and his three riders presented him with first, second and third place on the podium. Michael Rutter (GBR) took the win, while his team-mates Dan Kneen (GBR) and Alessandro Polita (ITA) joined him on the rostrum.

In race two on Sunday, Belgian Le Grelle returned to winning ways. He secured his third victory of the season. Polita and Rutter rode onto the podium again by finishing in second and third. Kneen was fourth that time, followed by Kostamo (fifth), Pekkanen (sixth), Cervený (seventh) and Grams, who completed the top-8 lockout in eighth.

The BMW S 1000 RR racers in the International German Championship (IDM) also had a fantastic weekend. The second meeting of the season was held in Zolder (BEL) and it was the home round for the Van Zon-Remeha-BMW team. The squad celebrated a double 1-2 result. Markus Reiterberger (GER) dominated on his BMW S 1000 RR, taking the win in both races with an advantage of 12 and ten seconds respectively. His team-mate Danny De Boer (NED) was second on the podium on both occasions.

Markus Reiterberger: “It was a great weekend, and the bike worked very well from the word go. In warm-up I was able to show a strong performance on used tyres and that was the final proof that we would have very good race pace. Both races were pretty similar for me – I claimed a start-finish win with an advantage of over ten seconds on both occasions. I tried to really push on the opening laps to pull away from the field and then to keep the advantage to the chequered flag. I succeeded in doing so in both races. Riding in front, I did not only try to bring the wins home but also to learn what the bikes needs and what I need. I tried different things regarding braking points, lines and so on. In doing so, I was able to gather very good information that we can hopefully use in the future and that can also be valuable in the preparation of our bike for my wild card appearance at the world championship round at the Lausitzring.”

The fifth round of the 2017 French Superbike Championship (FSBK) in Magny-Cours (FRA) saw Kenny Foray (FRA) extend his lead in the overall championship standings. In race one on Sunday morning, Foray played it safe in wet and tricky conditions. The Tecmas Racing Team rider took no unnecessary risks and settled with fourth. For race two on Sunday afternoon, conditions had bettered and Foray returned to the top step of the podium. He rode his BMW S 1000 RR to his sixth victory of the season. In the overall standings, Foray has now 207 points and an advantage of 73 points over his closest rival.

Kenny Foray: “It was a good weekend for us. On Saturday, we secured both pole positions. Race one was a bit difficult as it was held in wet conditions. I did not take any risks and finished fourth. In race two, I had a good start but at the beginning I struggled a bit with my feel for the bike. I was pushing but lost three positions. After five laps, my feeling came back, I was able to attack, I overtook my opponents and won the race with a small advantage. It was a great race, thank you to BMW and to my entire team for their perfect work.”

The French European Bikes Championship (FR EU) also held its fifth round of the 2017 season at Magny-Cours (FRA) at the weekend. Florian Brunet-Lugardon (FRA / Gers Moto Vitesse Ordannaise) was the man of the weekend, winning both races on his BMW S 1000 RR. This season he now has a tally of six wins despite the fact that he missed the second round due to injury. Overall, the BMW racers once more dominated the action.

In the second race held on Sunday, the BMW racers claimed all top-6 places. Florian Brunet-Lugardon again took the win, with Julien Brun (FRA / JB Racing Team) following in second place. Cyril Brunet-Lugardon was third on this occasion. Amalric crossed the line in fourth, while Hernani Teixeira (FRA / Team ERT Motorshow) and Dagault were fifth and sixth. In the overall standings the first six places are taken by BMW riders. Cyril Brunet-Lugardon leads, followed by his brother Florian, while Amalric is third.

Florian Brunet-Lugardon: “It was great for me and Cyril to take home a total of four trophies from Magny-Cours. On Saturday, we had dry and nice weather conditions. In the opening stages of the race, I was second and Cyril third but then halfway through the race the leader crashed and we could secure a comfortable 1-2 result. Sunday morning’s qualifying was held in wet conditions, and Cyril and me had to settle with fourth and ninth on the grid. In the race, we both had a good opening lap and I managed to get back in the fight for victory coming from ninth. I took the lead with two laps to go, while Cyril secured third place on the podium on the final lap.”

Laguna Seca (USA) also was the venue for the sixth round of the 2017 MotoAmerica AMA/FIM North American Road Racing Championship (AMA). Jason DiSalvo (USA / Scheibe Racing / Hayes Brakes) finished the two races in ninth and 15th respectively. Frenchman Sylvain Barrier returned to the series, being in action on a BMW S 1000 RR of team Brixx Performance. He unfortunately crashed in race one, but was tenth in the second heat.

After a long break of over two months, the Australian Superbike Championship (ASBK) held its fourth round of the 2017 season at Hidden Valley Raceway (AUS) at the weekend. Troy Guenther (AUS) of the NextGen Motorsports team claimed his best results of the season so far, finishing both races in tenth place. This comes despite the fact that the 18-year old was injured less than two weeks ago when he crashed heavily during testing.

Troy Guenther: “It was a hectic couple of weeks for myself and the team. After my testing crash I was happy to finish both races, and to do so within the top-10 for the first time. I want to thank the entire team and everybody involved for their help over the weekend.