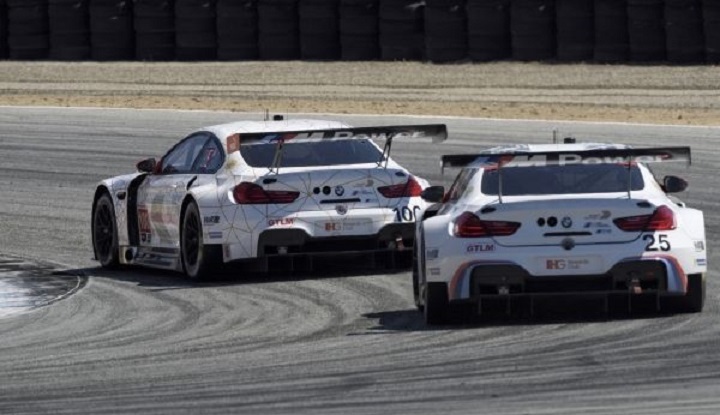 Following an eight-week hiatus in the 2016 IMSA WeatherTech SportsCar Championship (IWSC), BMW Team RLL shifts right back into high gear with races at Watkins Glen International (US) on the 3rd July and Canadian Tire Motorsport Park (CA) one week later.

The two venerable North American permanent road courses will surely be a challenging test for the new BMW M6 GTLM that showed early promise at Daytona (US) and Sebring (US), but struggled to put all the pieces of the new package together at Laguna Seca (US).

For both races BMW of North America will race the number 25 car, driven by Bill Auberlen (US) and Dirk Werner (DE), with a special livery to celebrate the 4th July as well as to pay homage to one of the most popular BMWs ever to race in North America – the BMW M3 GTR.

The BMW M3 GTR raced and won with this stars and stripes livery at the October 2001 Petit Le Mans race in Road Atlanta (US). Auberlen, along with Boris Said (US) and Hans-Joachim Stuck (DE), were the winning drivers. The number 100 BMW M6 GTLM, co-driven by John Edwards (US) and Lucas Luhr (DE), will continue to race with its unique livery celebrating BMW’s 100th anniversary.

The Sahlen’s Six Hours of the Glen is up first at the newly resurfaced 3.4-mile, 17-turn Watkins Glen circuit. The team tested twice at Watkins Glen in May, gaining experience on the new Michelin tyre that was introduced at Laguna Seca before the Le Mans break. An additional two-day test recently at Road Atlanta (US) provided more data that will help the BMW M6 GTLM compete on the high-speed, unforgiving circuit in the Canadian Tire Motorsport Park.

“We tested at the Glen recently and I think we had good pace. The Watkins Glen test was our first chance to really understand the new tyre that was introduced, so the performance was better and I feel good about that. The repaving of the circuit has made it much quicker than it was, so it will be fast, very fast. We’ve been on pole there before, finished third last year. We’ve had pace there so I’m optimistic of our chances there for sure. You always look forward to going to Watkins Glen because it’s such a historical place and really, in many ways, the birthplace of racing in this country.”

“We’ve done quite a bit of testing at the Glen and we’re getting more in tune with the car each test. Mosport quickly follows so we have to be ready for both weekends when we roll out of the truck.”

“Laguna Seca showed that we had to make improvements and we used the break to do exactly that. My sense is we’ll be able to get closer to our competition, as the BMW M6 GTLM seems to like high speed corners and that is what Watkins Glen and Mosport offer.”

“Watkins Glen is my favorite circuit in North America and, with the resurfacing, I’m even more excited to race there again. The test showed us how much grip there is now, so it seems the track flows even better than it did before. Having Mosport the next weekend only adds to my excitement, as a racing driver likes nothing more than two fast weekends in a row.”

“Mosport clearly separates the men from the boys and is my favorite of the two circuits. I believe the BMW M6 GTLM will be strong there. I said last year that Watkins Glen reminds me of sections of the Nordschleife, so it is a close second to Mosport. Now that it is repaved it is fantastic to drive. It will be a challenging two weeks.”