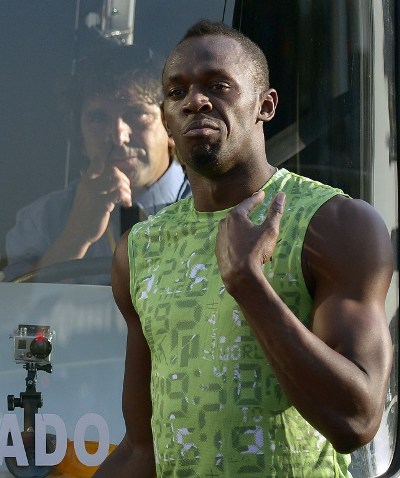 WHO can stop Usain Bolt winning a record-equalling fourth Laureus World Sports Award, after another amazing performance in 2013 from the fastest man on Earth?

Jamaica’s sprint star Bolt won the 100 metres, 200 metres and 4 x 100 metres relay gold medals in the World Championships in Moscow, a feat he also achieved at the 2008 and 2012 Olympic Games.

He was named IAAF Male Athlete of the Year for the fifth time and is one of the hot favourites to be nominated for the 2014 Laureus World Sportsman of the Year Award.

However, after a spectacular sporting year, there seems to be no shortage of challengers to Bolt with some of the giants of sport such as LeBron James, Rafael Nadal, Cristiano Ronaldo, Sebastian Vettel, Sun Yang and Mo Farah all strong contenders for the most prestigious individual Award in men’s sport.

The Laureus World Sports Awards, now celebrating its 15th year, is recognised as the premier honours event in the international sporting calendar. The names of the six Nominees for the Laureus World Sportsman of the Year Award, as voted by the Laureus Media Selection Panel, will be announced later this month and the winner unveiled at the Awards Ceremony in Kuala Lumpur on March 26.

From his own sport, Bolt will have strong opposition from Britain’s Mo Farah, who established himself as one of the greatest ever distance runners in 2013 by winning the classic 5,000 and 10,000 metres double, American Ashton Eaton, who won the decathlon in Moscow to add to his Olympic title, and Germany’s Robert Harting, who demonstrated his total dominance of discus with his third straight World Championship gold medal.

Germany’s Sebastian Vettel established himself as one of the greatest Formula One drivers of all-time with his fourth straight World Championship, matching the achievement of motor racing giants Juan Manuel Fangio, Michael Schumacher and Alain Prost. At just 26 years and 116 days, Vettel is the youngest four-time champion in the history of the sport, winning 13 Grand Prix during the year.

There has never been a winner of the individual Laureus Sportsman Award from team sports, but this year there are some strong candidates for Nomination, none more so than the irrepressible LeBron James voted both NBA regular season MVP and NBA Finals MVP. Behind his play, Miami Heat finished with a franchise and league 66-16 record. It was James’ fourth MVP award. He fell just one vote short of being the first player in NBA history to win the award unanimously. 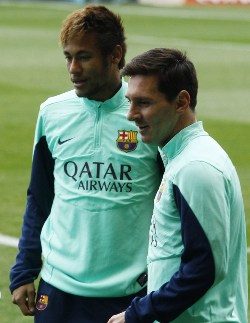 Messi and Neymar are also in the running for the Laureus Sports Awards/AFP pic.
In the calendar year, footballer Cristiano Ronaldo scored 69 goals for Real Madrid and Portugal, beating his previous best of 63 in 2012.

A superb hat-trick in the World Cup play-off against Sweden in November, which secured a place in this year’s finals for Portugal, was the climax of a remarkable year for Ronaldo, who was also named winner of the Ballon d’Or, the FIFA World Player of the Year Award.

Argentina’s Lionel Messi, despite injury, scored 45 goals for club and country in 2013, helping FC Barcelona win their 22nd La Liga trophy. And brilliant 21-year-old Neymar showed why FC Barcelona paid €57 million for him with an outstanding performance for Brazil in the Confederations Cup, which won him the Golden Ball as best player of the tournament.

Rugby too has candidates. Kieran Read was the International Rugby Board Player of the Year for 2013. With his defensive abilities, strong carries, lineout skills, field coverage and open ground running, the powerful No 8 has been the driving force behind the All Blacks’ 100% record of 14 wins out of 14 – professional rugby’s first perfect year, while Britain’s Jonny Wilkinson played a key part in Toulon’s Heineken Cup victory which lead to him being named European Player of the Year.

Spain’s Rafael Nadal, himself a two-time Laureus winner, returned after a seven months absence with a knee injury to produce one of his finest ever years. He missed the Australian Open, but was back to his best to win the French Open for a record eighth time. He also won the US Open to take him to a career total of 13 Grand Slams, just four behind Roger Federer. He regained his No 1 world ranking and also won five ATP Masters 1000 tournaments.

China’s Sun Yang became only the second swimmer in history to win all three long distance gold medals – 400, 800 and 1,500 metres – at the World Championships in Barcelona and was named top male swimmer of the event. Following his two gold, one silver and one bronze at the London Olympics, it confirmed his position as one of the greatest distance swimmers of all time.

Fellow-countryman Lin Dan won a record fifth badminton world title after being given a wild card entry. Considered the greatest ever badminton player, he has won all nine major titles and is the first to retain the Olympic men’s singles gold medal.