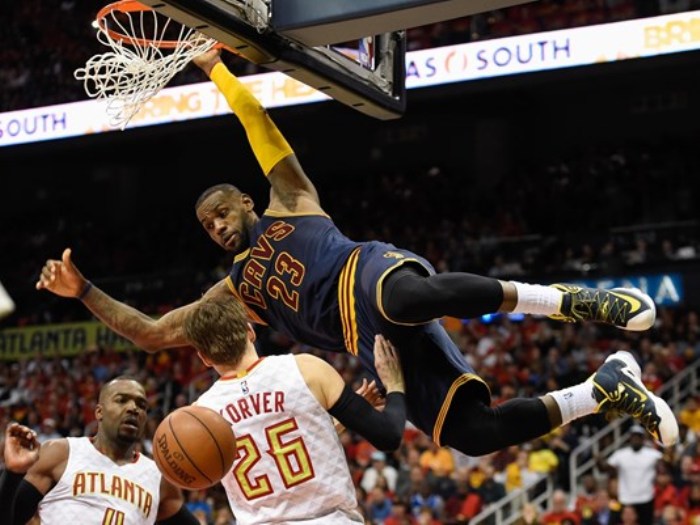 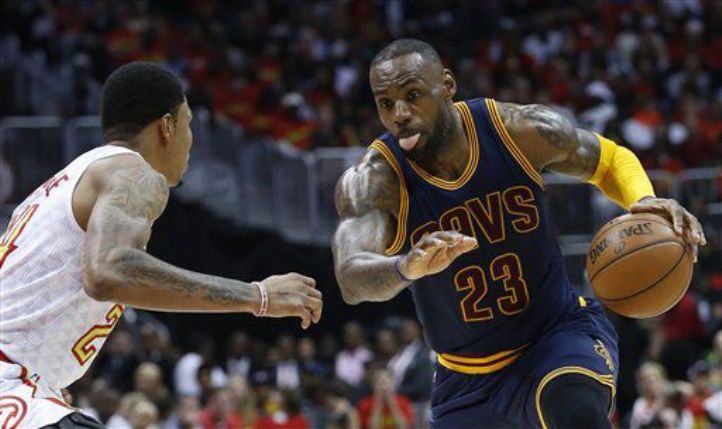 LeBron James and Kyrie Irving took over in the fourth quarter as the Cleveland Cavaliers seized a 3-0 stranglehold lead over Atlanta on Friday to move within one win of advancing to the NBA semi-finals.

James and Kevin Love each posted a double-double for the Cavaliers who drained 21 three pointers against the Hawks in a 121-108 victory. Cleveland is the first team in NBA history to hit at least 20 three pointers in back-to-back games.

The Cavaliers made an NBA-record 25 three-pointers in their game two hammering of the Hawks. They came close to that number again, shooting 53 percent from beyond the arc in front of a crowd of 19,000 at Atlanta’s Philips Arena.

“If you make a small mistake, they can make you pay,” Atlanta coach Mike Budenholzer said of Cleveland. “If someone is open, they find them. And right now that guy is shooting it and making it at a high percentage.”

In the late game, Kawhi Leonard scored 31 points to lead the San Antonio Spurs to a 100-96 victory over the Oklahoma City Thunder in game three of their Western Conference series.

Cleveland has all but assured themselves of reaching the Eastern Conference finals as no NBA team has ever come back from an 0-3 deficit in a best-of-seven playoff.

Game four is Sunday in Atlanta.

The Miami Heat and Toronto Raptors are tied 1-1 in the other best-of-seven East series.

Frye was acquired from the Orlando Magic in February. He’s played sparingly, but was ready Friday night and took some advice from James Jones to heart.

“James Jones was like, ‘Channing, you got to quit passing. You just go to shoot,'” Frye said with a laugh. “That makes it simple, so I was just trying to be aggressive.”

Atlanta’s Al Horford finished with 24 points and Kyle Korver came off the bench to add 18 points, including five three-pointers for the Hawks, who led 91-85 heading into the fourth quarter.

Irving and Frye each connected on two three-pointers early in the fourth quarter and James made his only three-pointer of the game with six minutes remaining, giving Cleveland its first lead since the second quarter.

The Cavaliers pulled away from there and now find themselves in the driver’s seat.

Friday’s game three had it all with spectacular dunks, relentless work ethic, physical play and a bunch of three pointers.

Atlanta closed the second quarter on a 20-5 point surge and led 63-55 at halftime.

At Chesapeake Energy Arena in Oklahoma, Leonard shot nine of 17 from the field to go along with 11 rebounds and three assists. LaMarcus Aldridge added 24 points and eight rebounds. Tony Parker posted 19 points as the Spurs took a 2-1 lead in their best-of-seven second round series.

Russell Westbrook paced the Thunder with 31 points on 10 of 31 shooting. He also tallied nine rebounds and eight assists.