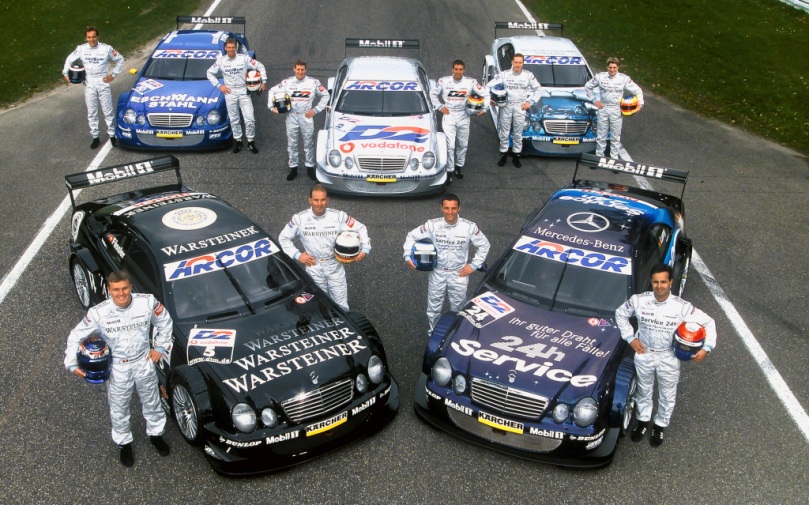 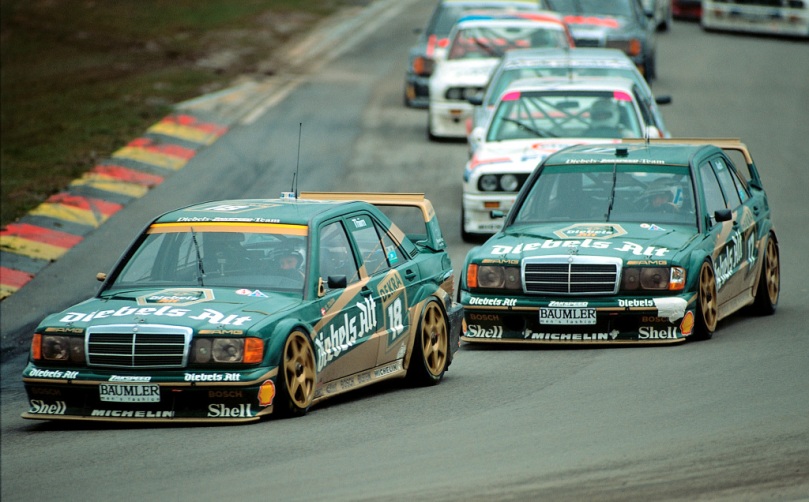 AMG – these three letters stand worldwide for supreme automotive performance, exclusivity, efficiency and high driving dynamics. The company founded by Hans-Werner Aufrecht and Erhard Melcher in 1967 is celebrating its 50th anniversary in 2017. In the course of this half century, Mercedes-AMG has further consolidated its position as an extremely successful sports car and performance brand with numerous successes in motorsport and the development of unique road-going vehicles.

Today, as a wholly owned subsidiary of Daimler AG, the Affalterbach-based company represents the sporting spearhead of the Group. For each of the now around 1600 employees, the focus will be on the brand promise of “Driving Performance”, which unites the core strengths of AMG: cutting-edge technology and a passion for dynamic, emotionally appealing products.

The basis for this is the phenomenal engine technology of Mercedes-AMG. And the company from Affalterbach has lastingly underpinned its high development capabilities with the two in-house designed sports cars, the SLS AMG and the AMG GT (Fuel consumption, combined: 11.4 – 9.3 l/100 km; Combined CO2 emissions: 259 – 216 g/km).

AMG started into the anniversary year with record figures under its belt, delivering almost 100,000 vehicles in 2016 and thus growing by more than 40 percent while being in the middle of the biggest strategic model initiative in the company’s history.

The strong first quarter of 2017 suggests that the barrier of 100,000 units will fall in the anniversary year. This dynamic growth was made possible by continuous further development of the performance models, which are in greater demand than ever. However, the strategic broadening of the portfolio in past years has also resulted in the successful development of new groups of customers.

Today, sports car enthusiasts can choose from a large selection of the AMG GT family. Another factor is the worldwide success of the popular eight-cylinder models in the 63 series, and the 45 series models in the compact segment. Because the 43 series models launched on a broad front captivate very many customers and put the modern product range of Mercedes-AMG on a broad, sound basis. The biggest sales markets were again the USA, Germany and China.

“Our strategic expansion of the product range has put us on course for success around the world. With more than 400 Performance Centres, we have also continued our expansion at the point of sales. The 63 series models still constitute our core model series, and delight car enthusiasts around the world. In addition, our sports car series, which was developed entirely in-house, is now available as a broad-based family, to which we will add a four-door variant next year, once more demonstrating our competence as a sports car brand. We will further expand our broad product range with a new product line in the compact segment. In this way we have set the course for continued sustainable growth. It is up to us to not only celebrate the success story of Mercedes-AMG now, but to help shape the performance of the future during one of the most exciting periods of automotive history,” says Tobias Moers, Chairman of the Board of Management of Mercedes-AMG GmbH.

Development of new categories of customers through portfolio expansion

2016 saw the biggest strategic model initiative in the history of Mercedes-AMG: with over ten new models being added to the product portfolio, from January 2017 performance-minded customers are able to choose from over 50 models. In each category, Mercedes-AMG boasts a comprehensive and impressive selection: from the most powerful production four-cylinder engine in the compact segment to sporty elegant models with a superior twelve-cylinder engine, from saloons and estates in a wide variety of output classes to a broad range of SUVs and coupés, to cabriolets and different types of roadsters. The available technology is among the best on offer in the respective vehicle categories, ranging from optimised rear-wheel drive to state-of-the-art all-wheel drive, as well as from a dual-clutch transmission to a sporty nine-gear automatic transmission.

At the same time, the sports car and performance brand has won entirely new groups of customers with its recently launched 43 series models. The 43 series models come with a powerful and efficient six-cylinder engine. Other hallmarks of the 43 series derivatives include a special transmission configuration with shorter shift times as well as discrete axle designs and suspensions, powerful brake components and other visual interior/exterior distinguishing features, confirming the models as typical AMG vehicles that fully deliver on the brand claim of “Driving Performance” while authentically representing the brand in the respective segments.

The entry of Mercedes-AMG into the compact class – and therefore a completely new market segment – in 2013 was another important milestone: the compact 45 series models immediately impressed with their sporty driving experience and the emotionally appealing design. Accordingly they also attracted new customers to the performance and sports car brand. Featuring the world’s most powerful series-production four-cylinder engine and the performance-oriented AMG 4MATIC all-wheel drive, the compact sports models clearly stand for hallmark AMG Driving Performance. Due to the strong demand, it is only logical to offer the customers in future an even broader selection in this segment as well.

The four-cylinder models not only lead their market segment in terms of performance and driving fun, they have reach the youngest ever AMG clientèle: the most represented age group here is 35 to 45 years. Many buyers purchase their first Mercedes-AMG in the form of one of the compact models. 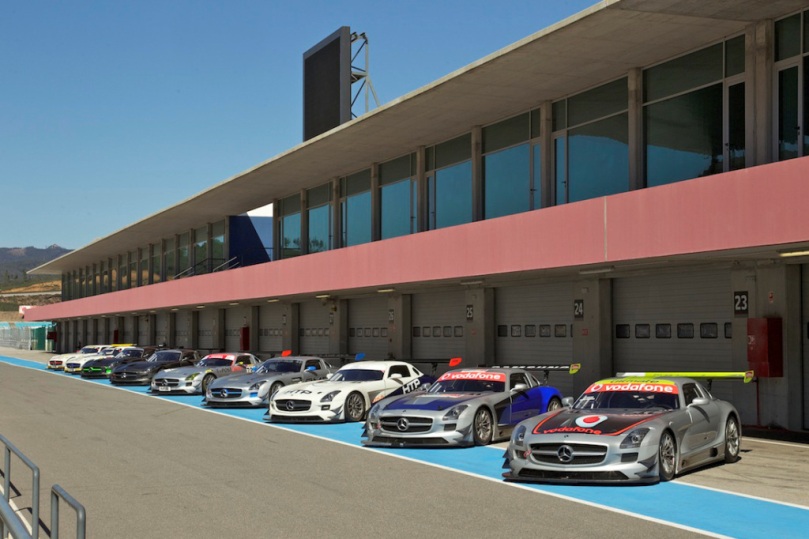 In less than three years, the second sports car series developed completely in-house has become a family of seven which includes coupés and roadsters. With the Mercedes-AMG GT model series, the Affalterbach-based company is once again underlining its positioning as a sports car brand. The front mid-engine concept with transaxle and the intelligent aluminium lightweight construction form the basis for a highly dynamic driving experience. With the AMG GT R and the two open-top variants, the AMG GT Roadster and the AMG GT C Roadster, the sports car family has been enhanced with fascinating models. The decision in favour of further expansion has already been made: the AMG GT Concept, which celebrated its première in Geneva, gives an initial look ahead.

For some time now, Mercedes-AMG has been responsible not only for the development of the AMG V8 engines, but also for the new eight-cylinder family of the Mercedes-Benz brand. The first production vehicle to be fitted with a V8 engine developed in Affalterbach was the G 500 (Fuel consumption, combined: 12.3 l/100 km; Combined CO2 emissions: 289 g/km), which celebrated its market launch in September 2015. The V8 engine for the upcoming new S-Class (Fuel consumption, combined: 8.5 l/100 km; Combined CO2emissions: 195 g/km) was also developed in Affalterbach, underlining the engine-building expertise of the three-lettered brand.

Mercedes-AMG and the Nürburgring: a strong partnership

Nowhere else in the world can a car be more effectively tested than on the demanding Nordschleife circuit of the Nürburgring racetrack. The stress profile of the 20.8-kilometre track reflects every possible driving state – and under extreme conditions. The development engineers of Mercedes-AMG spend about 17 weeks each year in the Eifel. And that is bound to increase in future, because the development site at the Nürburgring is being expanded further. Furthermore, Mercedes-AMG has entered into a cooperation with Nürburgring and will support the Nürburgring Driving Academy with vehicles from Affalterbach, for example.

With a total of 18 overall victories and 32 other podium finishes, the international customer and performance teams celebrated a sensational season in 2016 with the new Mercedes-AMG GT3. The GT3 racing car got the season off to the ideal start. In the 24-hour race on the Nürburgring at the end of May the GT3 racing car drove home the biggest success thus far since the AMG Customer Sports programme was founded: with overall victory, pole position, fastest lap as well as further second, third, fourth and sixth placings now on record in the annals of motorsport. The brand’s clean sweep of the podium places in the world’s biggest car race was shared by the AMG team BLACK FALCON (P1), the AMG team HTP Motorsport (P2) and the HARIBO Racing Team-AMG (P3).

Also in the customer sports programme, Mercedes-AMG will keep its foot on the gas in the coming season, with participation of the successful AMG GT3 being extended to the USA. Renowned teams will contest both the highly popular IMSA Series as well as the PWC, the Pirelli World Challenge. The teams will also benefit from optimal support from Mercedes-AMG Customer Racing in the USA.

As part of the strategic broadening of the portfolio to over 50 models, the number of AMG Performance Centres has also undergone huge expansion. At over 400 Performance Centres in 40 countries, customers and fans can immerse themselves in the brand world of Mercedes-AMG. These are places where the history of the brand and its DNA can be experienced first-hand. As appropriate for the wide product range, trained and qualified AMG sales and service experts provide knowledgeable advice and support to customers worldwide.

The next stage in the development of the AMG Performance Centres will see the opening of further AMG sales and service outlets with a distinct architecture in Japan, Australia and the Middle East. Complementing the existing global sales network, the independent location, which opened in Tokyo Setagaya in January 2017, spearheads the dealer network and defines the next step in the sales initiative. On a total area of almost 1000 square metres, customers can learn about the latest AMG Performance models and their technological features, the AMG Driving Academy, the AMG Collection and the involvement of AMG in motorsport.

Another central component of customer support is the online AMG Private Lounge. The online platform invites AMG owners to share their passion for the brand with other AMG enthusiasts. At present, the AMG Private Lounge Community has more than 55,000 accredited members worldwide. Insider knowledge, direct contact with Affalterbach, exclusive events and opportunities to communicate and exchange ideas give the brand a more approachable face. No other car manufacturer offers anything comparable.

To ensure a high quality of customer support, customers have access to an exclusive AMG hotline, launched in October 2016. The primary aim of the “pit radio” is to restore performance when needed – in the event of an accident, for example. The service hotline can also help if the customer has any technical questions or wants to make a workshop appointment. A defined process guarantees customers the quickest possible assistance. The hotline is initially available to customers in Germany, Great Britain, France, Austria and Switzerland, with further markets and a broadening of the offering to follow.

Milestones in the history of the sports car and performance brand

The company founded by Hans-Werner Aufrecht and Erhard Melcher has been fulfilling the dreams of performance enthusiasts for 50 years. The pair set up their first workshop in an old mill in 1967 as an “engineering office and design and testing centre for the development of racing engines”. In 1971, the AMG 300 SEL 6.8 of “Aufrecht and Melcher, Großaspach” – in short: AMG – claimed victory completely out of the blue in its class and took second place overall in the 24-hour race at the Circuit de Spa-Francorchamps. Another milestone was the all-new cylinder head with cutting-edge valve technology, developed by Melcher.

AMG branched into motor racing with the SLS AMG GT3 in 2011. This was followed by the introduction of the Mercedes-AMG GT in 2014 and the launch of the 43 series models in 2015, introducing a broader target group to the brand.