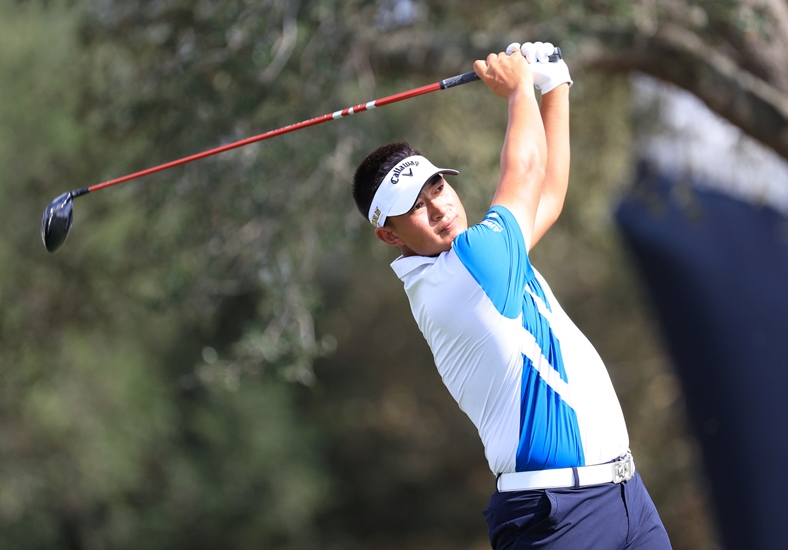 China’s Carl Yuan holed two monster putts en route to a second round of 4-under 66 to move up to tied fifth place in the weather-disrupted Cadence Bank Houston Open on Friday as American star Tony Finau seized the clubhouse lead with a career low equalling 62.

Finau, 33, got off to a sizzling start at Memorial Park Golf Course with seven birdies in his opening 10 holes before capping his day with three closing birdies to open a four-shot lead on 13-under as he seeks a fifth career PGA TOUR victory.

“They set the tee boxes up to where we had to take advantage. We got the better wave,” said Finau, who has shot 62 on four previous occasions. “Thirty-six holes is a lot of golf left, and it’s trickier to score with a north wind. But I’m looking forward to the challenge.”

Yuan was delighted to finally make the weekend play for the first time in his rookie season after graduating from the Korn Ferry Tour in second position. The 25-year-old, who missed the cut in his first three PGA TOUR tournaments, was forced to scramble his way around following some errant driving.

“Score-wise, definitely four under par is really good on this course. Honestly, I wasn’t hitting the ball as good. Some tee shots over the ball, I have no idea where it’s going. But yeah, glad to really stay in every shot, try to get around this course,” said Yuan, who has hit 50% of fairways through 36 holes and stands at 7-under for the tournament.

Countryman Marty Zecheng Dou were amongst those who will return on Saturday morning to conclude their second round after inclement weather disrupted play. Dou, who shot a first round 67, remained 3-under through eight holes while Korean duo Byeong Hun An and rookie S.H. Kim were also 3-under through 10 holes. Japanese star Hideki Matsuyama was 1-under for the event with six holes remaining.

After a bogey on 14, Yuan bounced back with five birdies on his card, including a 32-footer on the first hole and a superb 51-foot conversion on the seventh. “I know it’s a tough track that hitting greens is a key point. There will be a lot of lag putts. Fortunately I made two long ones to pick up a couple strokes there. Overall just played solid with good strategy I think, and looking forward to more of that over the weekend,” said Yuan, who hails from Dalian.

The rising Chinese star worked on quickening his pre-shot routine during a two-week break in hope of getting himself more committed into his shots. “(Worked on) things more routine and stuff, getting over the ball, not taking too much time before hitting a shot, just more committed walking into the shot and execute it and accept the result of it,” said Yuan.

“Didn’t run off a good start obviously and there’s a couple things that I like to change. Took some time off and looking forward to the last one to finish off the fall.”