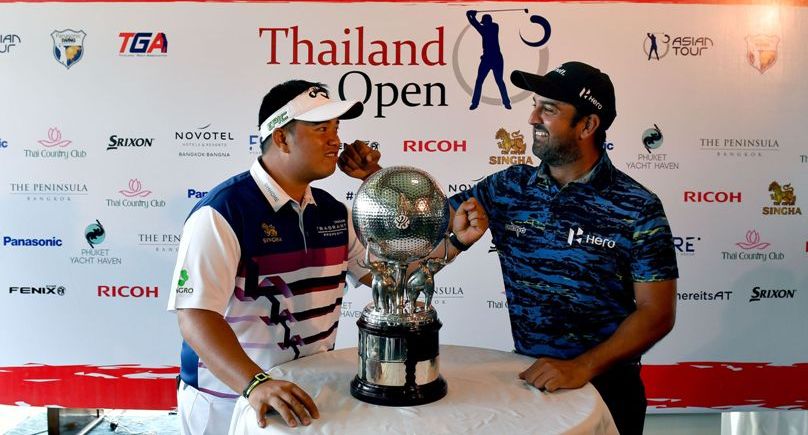 Young talent Liu Yan-wei of China plans to keep things simple in his pursuit for a career breakthrough at the US$300,000 Thailand Open, which gets underway on Thursday.

The 19-year-old Liu, only Chinese player in the elite field this week, is enjoying one of his best seasons so far, claiming one top-10 result on the Asian Tour in February and another tied-11th place finish on the European Tour last month.

Liu, ranked 556th on the latest Official World Golf Ranking (OWGR), also enjoyed solid finishes on the Asian Development Tour (ADT), claiming two top-three results in three starts this season. He was placed at 1092ndposition at the start of the season.

Liu will be among the elite field contending for the prestigious title at the highly-acclaimed Thai Country Club, which has hosted Asian Tour events in the past.

The Thailand Open, one of the oldest National Championship in Asia, is returning onto the Asian Tour schedule following an eight-year lapse this week.

This course condition is pretty good. It’s been raining quite a bit so it was kind of wet out there. This is my first time playing on this course. I played in the pro-am today and it’s been great. It wasn’t really windy when I played but I think it will be tough when the wind picks up.

I am looking forward to the week ahead. I have been working hard on my game lately just to prepare myself for this week.

I had a good result on the European Tour in Shenzhen last month. It was my best ever result on the European Tour so it has given me a lot of confidence. I am pretty satisfied with my season so far. I have had some commendable results on the Asian Tour and the Asian Development Tour as well. It has been one of my best starts to a season so far in my career.

I have no specific targets this week. I just want to prepare well and play it to my best this week, just like how I would have done so for any other events.

It’s great to have the tournament back on the schedule. It’s a very prestigious event. It’s lovely to be back at the Thai Country Club. Before I went to Chinese Taipei for the Yeangder Heritage which I won last month, I actually came to the Thai Country Club to practise.

It’s a place that’s very special to my heart. My career started here, after I won my first Asian Tour title some 12 years ago.

The course is fantastic. This is one of the few courses that hasn’t changed much over the years. It’s such a great test of golf. All the players have nothing but praises for the course.

I couldn’t ask for more. It’s obviously a great feeling to come back to a course which you like and with a recent win in the bag. We have got a very strong field this week, with top local players like Kiradech and Prayad in the field. It’s not going to be an easy challenge although I won two weeks ago. It’s hard to win these days with so many good young players coming up.

You need to have a lot of luck if you want to win. It’s good to come into the week with some good form and playing on a course that suits my eyes. At the same time, looking at the field this week, I know I have to play my best to put myself in contention again this week.

I have decided to play in the Thailand Open because of the Asian Tour which has played an important role in my career. I have always wanted to win on this golf course. I remember walking this course 10 years ago and seeing how Prayad won a tournament here.

I’m really happy to see the Thailand Open back on the Asian Tour again. To be honest, I have always wanted to play in my National Open and I’m glad I have the opportunity to play now.

With the National Championship now being staged at the Thai Country Club, I have more reasons to come back and play here. It would mean a great deal if I can win. A lot of big names like Boonchu and Prayad have won the Thailand Open, I would love to be part of that elite list.

I will try to play well in front of my home crowd. They have been really supportive and they are one of the reasons why I decided to play in the Thailand Open.

I am really impressed with the course. Full marks to the staff and management, course superintendent, as well as the General Manager of the Thai Country Club for doing up the golf course so nicely.

It’s rainy season now and they still made sure that the course is in excellent conditions for the tournament within such a short notice. I am really impressed.

It’s going to be a very low-scoring week because the rough is not up yet I think. You need hit good iron shots and putt well to score. I think it’ going to be a putting contest this week.

It’s always nice coming to Thailand. I was crowned the Asian Tour Order of Merit twice following the season-ending events held at the Thai Country Club in 2006 and 2008. It’s great to be back here. This place holds a lot of memories for me.