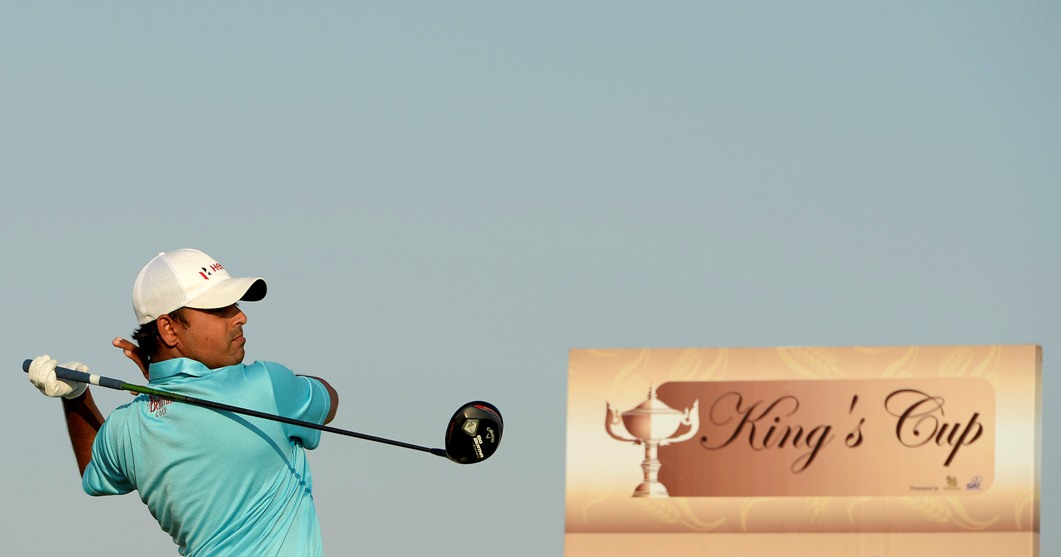 India’s S.S.P Chowrasia showed his resolve to win again while compatriot Anirban Lahiri fired an ominous warnings to his rivals when they took a share of the opening round lead at the King’s Cup on Thursday.

Chowrasia charged into the early morning lead with a seven-under-par 65 while Lahiri, who had an afternoon start, enjoyed a flawless round that was highlighted by seven birdies at the Singha Park Khon Kaen Golf Club.

Chowrasia, who lifted his third Asian Tour title on home soil earlier this month, displayed similar winning intentions with a near perfect card that was otherwise spoilt by a lone bogey on his closing par-four nine.

Fresh off his victory at home, the 36-year-old also showed his fondness for playing in Asia again.

Starting on the back-nine 10th, he made a quick start with three birdies in his opening four holes.

Chowrasia then raced further ahead with five more birdies in his next seven holes after the turn before a bogey on the closing ninth hole put the brakes on his charge.

“I’m pleased with how I’ve played as I shot a really low number. It was unfortunate on the last hole as I hit a good tee shot and again a second shot. But I three-putted there.

“Indian players are doing very well this year and I’ll try to win my first title abroad this week. My season has been very good. I didn’t play well at Q School in Europe but I’m doing well in Asia,” said Chowrasia.

Lahiri also put up another commanding performance which would bridge the Order of Merit gap with Korean-American leader David Lipsky.

While it is still early days at the King’s Cup, the five-time Asian Tour winner is hopeful of keeping up his rich vein of form.

“There’s still a long way to go as it’s just the first day and I’m happy with my start. I’ve got to keep pushing on from here.

‘I played really solid today right from the start and gave myself lots of chances. I took a couple of them but also missed a few but overall it has been a good day,” said Lahiri, who trails Lipsky by slightly over US$160,000 in second place on the money list.

Danthai, who is making his debut as a professional at the King’s Cup, got the dream start he wanted.

The 18-year-old won the team and individual gold medals at the 2012 SEA Games and is carrying his illustrious amateur record over to his maiden professional event, while taking advantage of his course familiarity too.

“Nice way to get my professional career going with a round like this.  It’s a dream start and I’m really happy.

“I’m used to this golf course too as this was our training base for the Asian Games where we won the team bronze medal this year,” said Danthai.

Playing in his rookie year on the region’s premier Tour, Richardson is charged up for a grandstand finish this week.

The Australian played his way into contention in Chiangmai a fortnight ago and is looking forward to another shot at glory.

“I’m trying to pump myself up for a really good finish this week as I’ve been playing really well and getting myself into contention.

“I was actually a little frustrated as I could only manage to turn at one-under. I was hitting the ball well and giving myself chances which I just couldn’t convert. But when I got to the back-nine, I told myself I got to do better and make some birdies. I start with one right after the turn and played really solid from there,” said the Australian.

Leading scores after round 1 of the King’s Cup being played at the par 72, 7449 Yards Singha Park Khon Kaen GC course (a- denotes amateur):