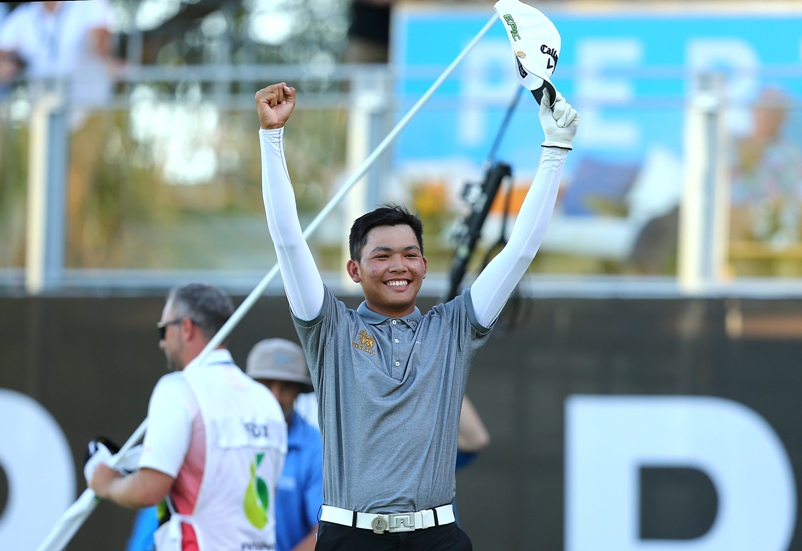 Thailand’s Phachara Khongwatmai showed maturity beyond his age when he secured the last spot for Sunday’s matchplay showdown with a par at the third play-off hole at the ISPS HANDA World Super 6 Perth on Saturday.

Only 17, Phachara calmly held his nerves after hitting a poor tee shot which led to a bogey at the first play-off hole. He could have confirmed his place earlier at the second play-off hole had his birdie putt not sail just inches away from the pin.

The Thai, who then went up against New Zealand’s Ryan Fox in the third play-off hole, judged his chip beautifully from the back of the green after Fox had misread his line for a par. That left him with an easy tap-in for par which would later spark wild celebrations from the Thai contingent gathered at the Lake Karrinyup Country Club.

Home favourite Brett Rumford of Australia emerged as the leader of the pack after returning with a four-under-par 68 at the AUD$1.75 million event that is that is tri-sanctioned by the Asian Tour, the ISPS HANDA PGA Tour of Australasia and European Tour.

The format is the format. But someone has to lead this qualifier.  My main focus now is obviouslytomorrow, find out who I’m paired with and just go out with all guns blazing. My main focus was really just to try and replicate the stroke play format and see how my swing and how I just handle the situation under pressure.

I had a late tee time today, later than what I’ve been used to. So I was sitting around all day and thinking about the shots I had to make. I was feeling a bit of pressure today as ideally I wanted to make it into the top-eight but it’s still okay as I’m in the top-24 now and that’s all that matters. I’m ecstatic.

It felt really good after my early struggles in the week. I hung in there all week and I was especially proud of how I played today. I like matchplay and this new format will be interesting. I going to play how I’ve been playing all week and I’m glad I can be among the 24 players playing in this inaugural format in Perth.

I did a lot of things right today. The wind was not as strong as the last few days and it was nice to put a good score on the board. I’m glad I made it through the play-off and I’m looking forward totomorrow. I’m happy to play anyone tomorrow and we’ll see what happens.

For me no pressure to play golf, yeah, I just play and fun to play golf here. I knew I still had the chance after making bogey in the first hole. I hit a very bad drive but I was confident when I had another chance. I was very unlucky not to get that birdie in the second play-off hole but when it came to the third hole, I was not nervous. I’m looking forward to tomorrow.

This is a very good format and it’s very exciting. You’re used to making the cut after two days and now you’re trying to make another one after three days followed by a matchplay. But it’s going to be fun. I’ve been involved in several matchplay in my professional career including captaining Team Asia in the EurAsia Cup last year. I like to play aggressive golf and it’s going to be fun. I like matchplay format as you can put the pressure on the other person and making sure you hit the second shot close to the hole.

Leading Scores after round 3 of the ISPS HANDA WORLD SUPER 6 PERTH being played at the par 72, 6531 Metres Lake Karrinyup GC course (am – denotes amateur):