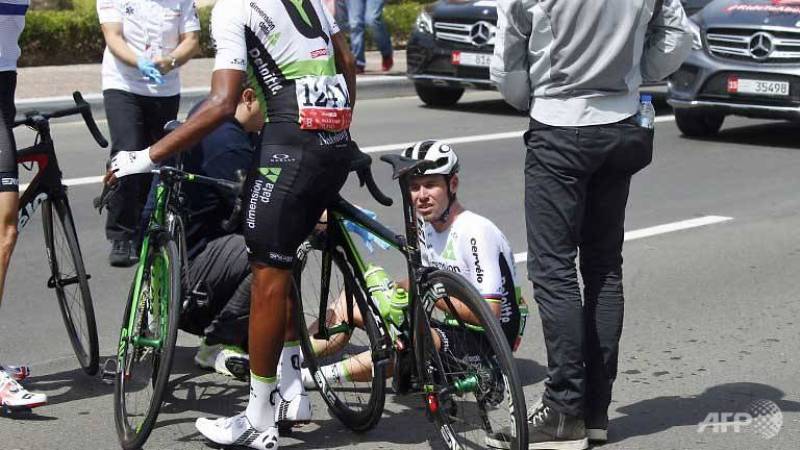 British sprint king Mark Cavendish made an early exit from the Abu Dhabi Tour on Wednesday after crashing before the official start of the first stage.

The former world champion collided with a car that had braked suddenly before reaching the start line in the western desert of Madinat Zayed, according to the official Abu Dhabi television channel.

Cavendish, who appeared to be suffering from shoulder and neck pain, was examined by a doctor and attempted to re-enter the peloton but bowed out a few kilometres later.

“Mark sustained a concussion and a whiplash injury after his crash today,” said Team Dimension Data doctor Adrian Rotunno. “Due to the concussion, we were not willing to risk rider safety and the call was made for Mark to stop the race.

“A serious neck injury has been excluded in hospital. He currently has some concussive symptoms and neck pain, but is otherwise stable. We will monitor Mark’s condition closely going forward.”

The 32-year-old, who won the third stage of the Dubai Tour on February 8, was one of the headliners of the five-stage Abu Dhabi Tour, which includes three stages particularly favourable to sprinters.

Alexander Kristoff won Wednesday’s opening stage in a sprint finish, withstanding a late charge from Andrea Guardini at the end of the 189km route that started and concluded in Madinat Zayed.

Cavendish was forced to abandon the Tour de France last year after a heavy crash at the fourth stage finish line left him with a broken shoulder, triggering the disqualification of winner Peter Sagan. – Agence France-Presse