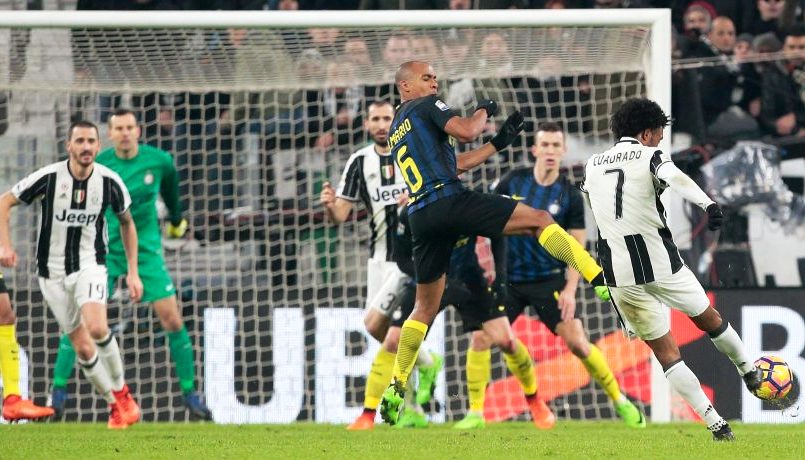 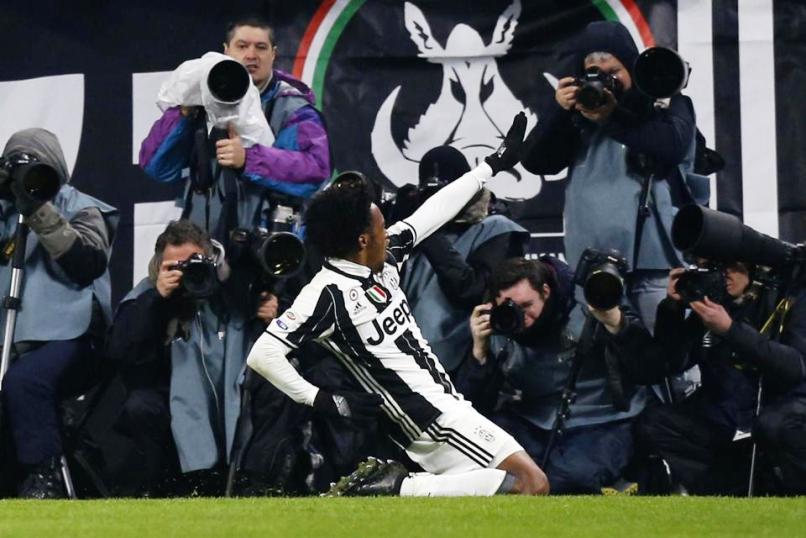 Juan Cuadrado broke his Serie A duck for the season with a sensational strike that sent Juventus six points clear of Napoli thanks to a 1-0 win over Inter Milan on Sunday.

Title hopefuls Roma, currently third at seven points behind, can move back up to second place with a win over Fiorentina in their delayed game on Tuesday.

But the Giallorossi, still reeling from a 3-2 defeat to Sampdoria last week, are now under huge pressure not to drop further points following another defiant display from the 32-time champions in Turin.

Inter travelled west hoping to build on a superb spell of form that has seen Stefano Pioli’s men claim 25 points from their last 10 games.

But poor finishing and dogged Juve defending kept Inter at bay in a promising first half before Cuadrado put a smile on coach Massimiliano Allegri’s face with a slightly-deflected shot that beat Samir Handanovic at his top corner on 45 minutes.

Juve held on amid an at times bad-tempered second half, Ivan Perisic seeing red in the final minute, to secure an 18th win that kept them on course for a record-setting sixth consecutive title.

“It was a great game, really top drawer stuff. Looking at some of the players it was like a Champions League semi-final, and we can learn some things from it,” Allegri told Sky Sport.

“It’s lucky for us Inter had a slow start to the season, otherwise the’d be a lot closer to us right now.”

“In the first half we had decisions go against us when we were in the Juventus area. For me, they were clear,” Pioli told Premium Sport.

“We should have had two penalties in the opening half. Mandzukic and Chiellini both fouled Icardi, and when you don’t get those (decisions) the whole match changes.”

Paulo Dybala was one of three Argentinians, along with Juve striker Gonzalo Higuain and Inter striker Icardi, being watched in Turin by national team coach Edgardo Bauza.

And he impressed from the off, a spectacular overhead kick from Mandzukic’s nod-on forcing Handanovic into a two-handed block.

The Inter ‘keeper cold only look on in relief when the Juve playmaker pounced on a loose ball soon after to curled a shot on to the crossbar.

Inter were rumbled, and finally moved up a gear but Roberto Gagliardini fired just over on the volley and Joao Mario drilled inches wide of Gianluigi Buffon’s post.

Perisic turned provider for Gagliardini to head straight at Buffon, who was alert to Perisic’s header from seven yards out moments later.

Juve went on the counter but Mandzukic sent his diving header wide after stealing in behind Jeison Murillo to meet a cross on the bounce.

Icardi then glanced a shot wide from a great Perisic delivery, but Juve came fighting back.

Miralem Pjanic’s sublime free kick had Handanovic in a flap to save at the crossbar, but the hosts’ persistence paid off when Cuadrado pounced on a poor clearance to fire through several bodies from 25 yards out and beat Handanovic at his near post.

Juve should have doubled their lead eight minutes after the restart but a spectacular Handanovic parry denied Bosnian Pjanic at the near post.

Geoffrey Kondogbia replaced Marcelo Brozovic and Eder came on for an ineffective Antonio Candreva on the hour and the extra legs provided Inter with an initial spur.

Yet the visitors ran out of steam and were thankful to Handanovic for blocking Higuain’s drive after he turned on Dybala’s pass in the area.

Eder went on the counter, but with options nearby the Italy striker wasted the chance when he got caught in traffic.

At the final corner Handanovic ran upfield but the ‘keeper earned a caution for his clumsy effort and Inter’s frustration was completed when Perisic saw red in the fourth and final minute of added-on time. – Agence France-Presse