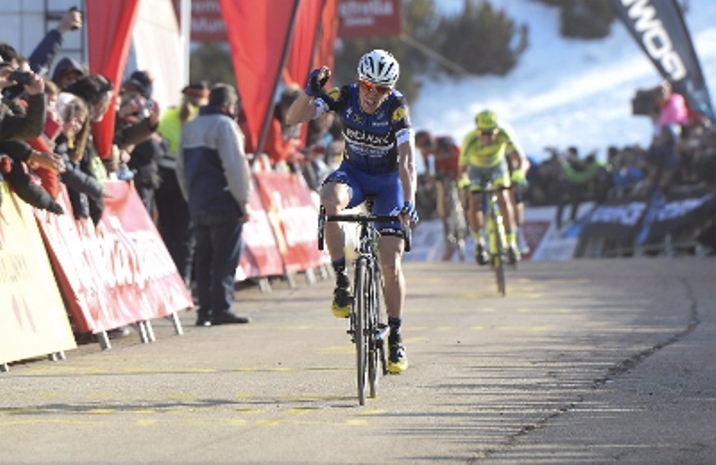 Ireland’s Dan Martin gave his Belgian team Etixx-Quickstep a boost on Wednesday when beating off a bunch of climb specialists to a snow-capped summit win on stage three of the Tour of Catalonia.

The victory also gives Martin the overall lead after he attacked 500m from home after Chris Froome and Nairo Quintana had first tried to shake off a group of around 30 who led the race up the fourth climb of the day.

At the 1725m high Molina ski station the 29-year-old Martin dug deep to hold off Contador of Tinkoff, two seconds adrift in second, and up-and-coming French climber Romain Bardet of AG2R in third.

Tejay Van Garderen and Richie Porte of the American BMC team were fourth and fifth while Chris Froome of Sky, the first to try and break, was 12sec behind Martin.

“The guys were incredible,” said Martin. “Since this morning they said they will ride for me and did a fantastic job. It’s great to see how much confidence they have in me, and this only makes me stronger.

“There was some headwind on the climb, so it was important to time the attack to perfection on that steep part of La Molina.”

Looking ahead to Friday’s stage from Baga to Port Aine, Martin said he was braced for another testing day.

“That’s another hard climb, and it will be difficult to defend the jersey. Still, we have a very strong team and will try to keep the lead.

“The time gaps are always small in this race, so who will come out on top tomorrow will probably win the general classification.”

Earlier in the day French rider Nacer Bouhanni, the overnight leader after two bunch sprint stage wins, pulled out with a stomach complaint.

Froome, Quintana and other mountain specialists will get a chance Thursday to reel in main threat Contador when the fourth stage takes in a pure climber’s summit finish after two other category one mountains at Pyrenean ski station Port Aine. – Agence France-Presse